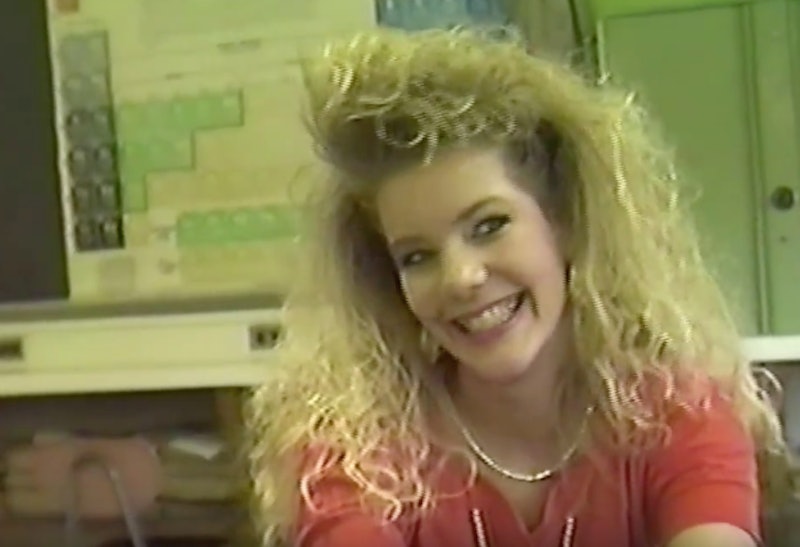 In film and TV, we see period pieces of the past and future all in the same high quality resolution, because real people were never in black and white and will never be in 4D. But there's something undeniably evocative about seeing a period through the lens of existing technology, which is exactly what James Burdick did when he filmed a 45 minute VHS tape chronicling a day in the life of a high school in 1990. At the time, Burdick was just excited to have a video camera. After watching Back to the Future, he became moved and inspired by the fleeting of time. And so he set out to record as much of his time as possible, just for the sake of having it as a irrefutable time capsule.

We've seen the '90s in film and TV, they're typically characterized by flannel, distressed denim, center parts, coffee cups and Walkmans poking out of side pockets. And what we see is of course contrived, because we're seeing a reproduction. We're seeing people acting like they're products of the '90s, wearing clothes that a costume designer pulled for them, saying the words that a writer wrote for them, moving through space the way the director tells them to. Which is exactly why Burdick's video is so interesting.

What I find most interesting about this video is not that it's very different from a video someone might take of the high school experience today — it's that it's the same. High school students are always a mix of hammy and shy, embarrassed by their bodies but over-confident at the same time. They dress themselves the way they want to be seen, each walking around subconsciously carrying a billboard for the type of person they're trying to sell. The jocks playing with their soccer balls idly how a poet might chew on their pen.

All that makes this video different is the quality of the recording. For Burdick, he can travel to the past when he watches his tapes. We don't even need to see the time stamp to know that this footage is part from the past, everything about it is different that today's technology. The lighting, the clarity, the contrast, the balance, the resolution, the audio, saturation. We always think that we have the best technology possible, but what kind of videos will our kid's kids be making?

Watch the video and take a trip back to 1990 here:

More like this
Starbucks’ Chocolate Cream Cold Brew Tastes Like This Retro Candy
By Emma Garza
The Viral TikTok “30,000” Sound Fits Nearly Every Scenario
By Courtney Young
Kris Jenner’s Advice For Kim Kardashian Is Going Viral On TikTok
By Courtney Young
Meet The Disney Imagineer Bringing 'Guardians Of The Galaxy' To Epcot
By Charlie Mock
Get Even More From Bustle — Sign Up For The Newsletter