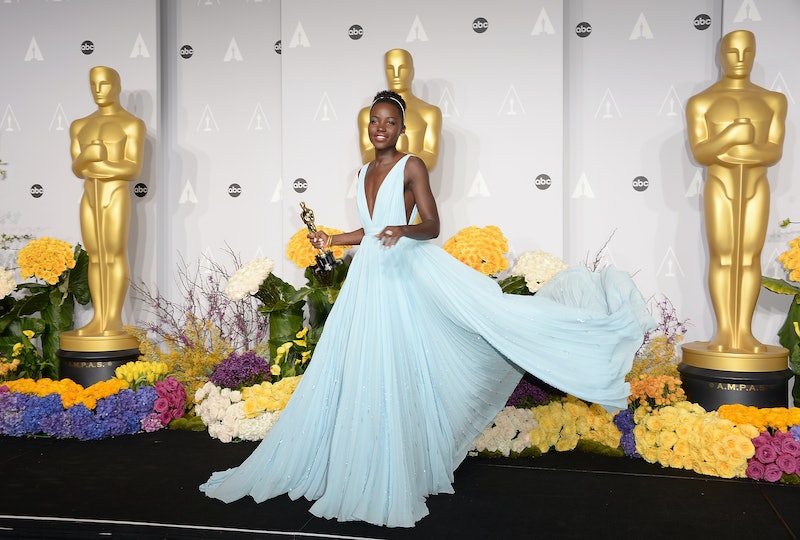 The Academy Awards is the biggest awards show of the year, which means it brings out some of the fabulous outfits. From big ball gowns to tight-fitting dresses, this red capet has it all. The most iconic Oscar dresses of all time all have one thing in common — they're major stand-outs. Whether they're on the best or worst-dressed list doesn't matter, because these dresses deserve a category all of their own.

In the past 88 years of Oscars history, some seriously stunning looks have graced the red carpet. Short, long, colorful, muted — nothing is off limits at the Oscars. Each actor embraces their own personality with their style, making for an always entertaining show. Sure, the night might be all about the awards, but the style is always a really fun bonus — and just as important as who takes home a golden statue, in my opinion.

From Angelina Jolie's silk slip dress to Lupita Nyong'o's pale blue twirls, the most iconic moments are the ones you never expect, but can't seem to get them out of your head once your see them. I can't wait to see which outfits from this year's ceremony earn a place on this list, but for now, here are the 15 most memorable fashion moments in Oscars history.

Does it get any more stunning than this? Hudson came out of nowhere in this caped Atelier Versace gown that completely stole the show.

Bullock wowed and won Best Actress for The Blind Side in this golden-hued gown.

Not only is this dress iconic for the way it twirled down the carpet, but it was the first look Nyong'o wore to the Oscars.

Her pearl Calvin Klein gown, which was apparently stolen from her dressing room, also deserves an honorable mention for most iconic of all time.

The Sex and the City star looked fabulous in the Chanel pale yellow gown. This wasn't your typical strapless gown and the choker-styled scarf definitely gave it a timeless feel.

Even though this dress was nude, it was definitely a stand-out.

Björk's swan dress didn't exactly get her on the best dressed list in 2001 — or ever, for that matter — but it's iconic for sure.

This puffy pink princess dress was the star of the late '90s Oscars.

Stone's high-slitted Elie Saab dress was such a different pattern and color than anything she'd worn before.

What was really incredibly about this look was how great it was from every angle.

Berry brought a start to the barely-there dress trend with her Elie Saab half mesh gown.

This Givenchy Couture gown combined beading and soft, flowing fabric for one of the most stunning looks of all time.

Just look at the back!

This menswear meets feminine look is so memorable.

Witherspoon has had a lot of fabulous looks at the Oscars, but this was by far her most timeless.

Streisand rocked the heck out of this mesh pantsuit, making it one for the books.

I can't wait to see how this year's fashions will compare!

More like this
Behold: The Best, Most Dramatic 2022 Met Gala Looks Of The Night
By Dominique Norman
Remember When Benedict Cumberbatch Announced His Engagement In A Newspaper Ad?
By Hugh McIntyre
Tom Cruise Gives His Honest Review Of Lady Gaga’s New Song For 'Top Gun: Maverick'
By Hugh McIntyre
How To Master Baby Braids, According To TikTok
By Tomi Otekunrin
Get Even More From Bustle — Sign Up For The Newsletter