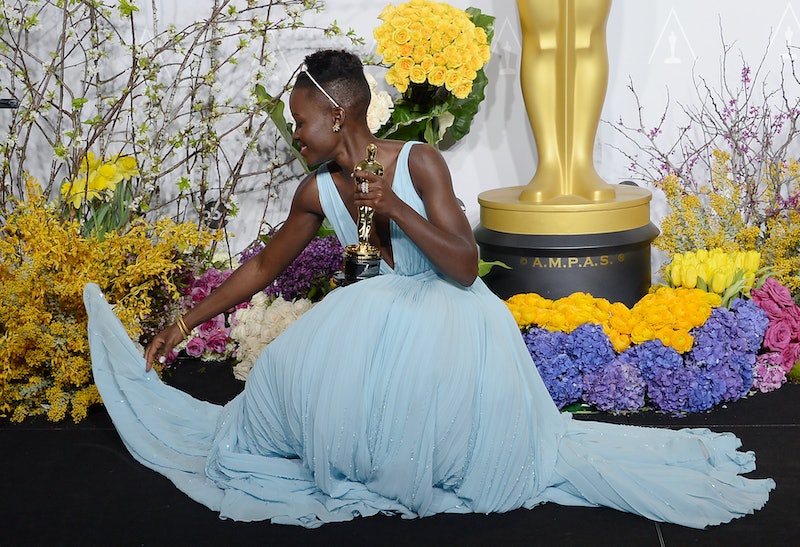 When it comes to handing out accolades to some of the most deserving artists and performers of the world, the Academy Awards is just about the most prestigious ceremony out there. Sometimes the show even makes history, like when Halle Berry became the first WOC to take home an Oscar for Best Actress in 2002. But the Oscars red carpet is where all the magic really happens. It's there that iconic moments in fashion cause a ripple effect in both Hollywood and your local mall. It's where bold and unforgettable statements are made.

While all the women who have made red carpet history with their couture gowns and glittering jewels since 1929 are well-deserving of their "fashion icon" title, it's also important to acknowledge that most of these women are white. As articulated in award-winning actor Viola Davis' 2015 Emmys acceptance speech, and as exemplified by the #OscarsSoWhite hashtag, people of color remain hugely misrepresented at award shows. Halle Berry is still the only WOC to have ever won an Oscar for Best Actress, and she received that award over 10 years ago. The issue of white washing in Hollywood is certainly reflected in who is on the red carpet, as well as who is considered an icon or tastemaker regarding style in general.

Although mindfulness regarding these problems is hugely important, I do think we can make room for sartorial celebration as well. So let's look back at some of the best red carpet looks from over the years, and hope for a more diverse Oscars ceremony come 2017.

Rocking one of the most classic dresses of 20th century red carpet looks, Hepburn looked adorable in her white floral Givenchy dress and matching white belt. A rising star at the time, this look undoubtedly helped launch her into the style icon status she's known for today.

This sparkly black two-piece, designed by Cher's longtime collaborator Bob Mackie, was a statement worthy of the wearer with its showgirl-esque quality and enormous feathered headdress.

Crawford's stunning red Versace dress with a plunging neckline was voted the 12th most iconic red carpet dress ever in a poll by The Telegraph, and was certainly one of the most highly imitated looks at the time.

This silky yellow Dior gown was created for Nicole Kidman by John Galliano, who at the time had only just joined House Of Dior. It looks like her leap of faith was justified, since this dress has been included on Oscars Best Dressed lists ever since.

Paltrow's pink Ralph Lauren gown screamed of all the Grace Kelly vibes, and definitely had a hand in bringing the color pink back into style, both on and off the red carpet.

Bjork's iconic swan dress (by Macedonian designer Marjan Pejoski) is my personal favorite Oscars gown, since she brought a little of her whimsical avant garde nature into an event that is usually characterized by classic couture gowns.

This black and white Valentino dress — a 1992 vintage design taken from the brand's archives — was worn by Julia Roberts on the evening of her Best Actress win for her role in Erin Brokovich. I'd consider it one of the high points in the designer's career.

Berry wore this gorgeous Elie Saab gown the night she became the first Black woman to win an Oscar for Best Actress. The sheer floral bodice and the rich burgundy skirt turned out to be the perfect bold statement for what is arguably one of the most important nights of award show history.

This white stain halter-topped dress by Marc Bouwer simultaneously served up sophisticated elegance and bold sexuality. It was perfect for Angelina Jolie.

Queen Bey has always slayed — something made apparent with the gorgeous black velvet gown she rocked to the 77th Annual Academy Awards.

Williams' dainty yellow Vera Wang gown was gorgeous. The garment's vintage-inspired tulle detailing and the actor's gently tousled up-do really helped create a soft and feminine look that was ideal for the Oscars.

Bullock's silver Marchesa gown from the 88th Annual Academy Awards was just breathtaking, what with its dainty floral detailing and glittery skirt that looked like liquid silver.

This gorgeous full-skirted white Dior gown accompanied Lawrence to the red carpet, and as she famously fell while ascending the Oscars stage to accept her award for Best Actress.

Nyong'o looked absolutely ethereal and fairy-like in her light blue Prada gown and silver headband for her first ever Oscars. The lovely hue was inspired by the actor's hometown in Kenya. "It's a blue that reminds me of Nairobi, so I wanted to have a little bit of home," she told Ryan Seacrest on the red carpet.

J. Lo lit up yet another red carpet with her deep V, blush-colored Elie Saab gown. The multi-talented actor and musician looked like a princess with her tulle skirt, sleek high pony, and a pastel pink lip.

I cannot help but wonder what outfit from this year's Oscars will become the iconic defining piece of 2016. Tune into the 88th Annual Academy Awards on Sunday, Feb. 28 to find out.