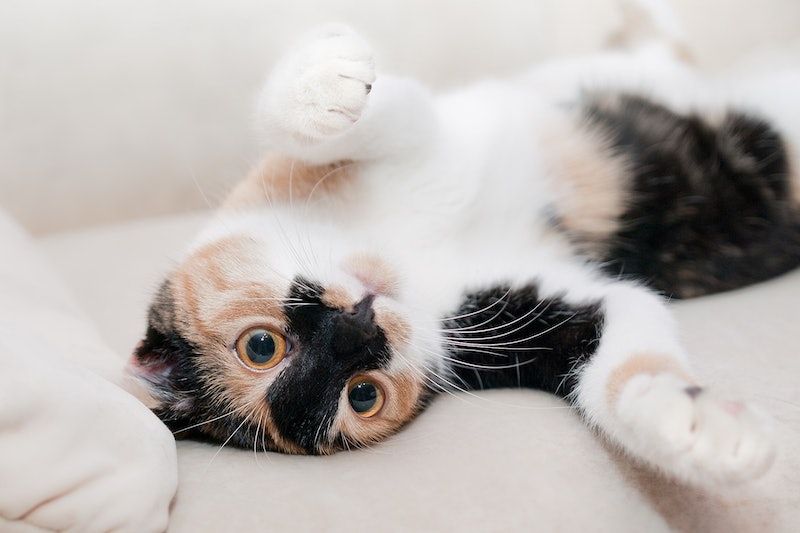 While it’s fairly easy to figure out exactly what dogs are trying to tell you at any given time — if non-clothes-wearing creatures were capable of wearing their hearts on their sleeves, pooches would display theirs proudly and without fear — decoding cat language can be a little trickier. Luckily, though, there’s a ton of research out there that can help us figure out just what Fluffy means when she sits there slowly blinking at us. Even better, we’ve got it in infographic form, thanks to a lovely little series by UK rescue organization Cats Protection. Isn't the Internet grand?

Cats communicate primarily in a few different ways: Through their facial expressions, through their body language, and through their behavior. To be fair, they also talk — that is, they communicate through their meows — but not every cat is super talkative, so your mileage may vary depending on each individual feline. If you do have a chatterbox of a cat, it’s usually pretty easy to tell the friendly sounds from the non-friendly ones; purrs typically mean they’re content (although they can also be a sign of stress), chirps or trills usually mean they want you to look at or follow them (apparently those are the noises mother cats make when they want their kids to keep up), and hisses mean "YOU STOP THAT RIGHT NOW." A plain old “meow” in and of itself is quite versatile (kind of like a certain four-letter word according to Boondock Saints ); depending on the way your cat uses it, it can mean everything from “Hello, human!” to “FEED ME. NOW.” My cats, for example, are making their “Give me treats!” meows right now. (Nice try, cats.)

But back to the physical cues. According to Cats Protection's handy dandy infographics, here’s how to decode what your cat is saying based on what they’re doing with their bodies and faces.

Although it may seem like your cat has the same dang look on its face all the time, subtle changes in the way they position their ears, eyes, and whiskers reveal loads about the inner workings of your pet’s little feline mind. The exact combinations vary, but generally speaking, a happy, calm cat looks pretty similar to a happy, calm human: Everything is nice and relaxed. Be on the lookout, though, if your cat’s eyes are wide open with wide pupils, their ears are pricked up or lying flat, and/or their whiskers are pointed forward; they might just be on alert, but they also could be stressed, worried, or anxious. If everything is drooping down, that might be an indication of depression.

Cats like to say hello with their body language in a variety of different ways, but the most common are arguably rolling over on their backs and balancing on their hind legs while they reach up to you with their front paws. Be warned, though: A cat rolling around on its back is not usually asking for belly rubs. It means that they feel safe around you, not that they want you squeezing them in their squishy bits. A crouched posture, meanwhile, usually means that they’re on alert; if your cat is crouching, you might want to see if you can figure out which facial expression they’re making as detailed above in addition in order to decode exactly how they’re feeling.

Cat behavior is arguably the easiest part of a cat to decode — or at least, it's what I have the easiest time figuring out. If they’re rubbing up against either you or a nearby object, they’re marking their territory, but in a good way — a way that says, “I like you and I feel at home here.” Kneading — a throwover from their kitten days — also typically means they’re happy, although it can also be a stress reaction. (It helps them calm themselves down.) And if they’re hissing? You should probably already know what that means. If they’re hissing at you, stop whatever the heck you’re doing, because it’s clearly antagonizing the creature.

Head on over to Cat Protections' blog for more fun cat facts.

More like this
The 10 Best Cat Puzzle Feeders
By Lauren Moison
My Picky Eater Dog Absolutely Devours This All-Natural Food
By Allison Berry
Remember These Ancient Pieces Of '90s Tech?
By Lucia Peters and Emma Carey
Here's Your Daily Horoscope For May 24, 2022
By Mecca Woods
Get Even More From Bustle — Sign Up For The Newsletter