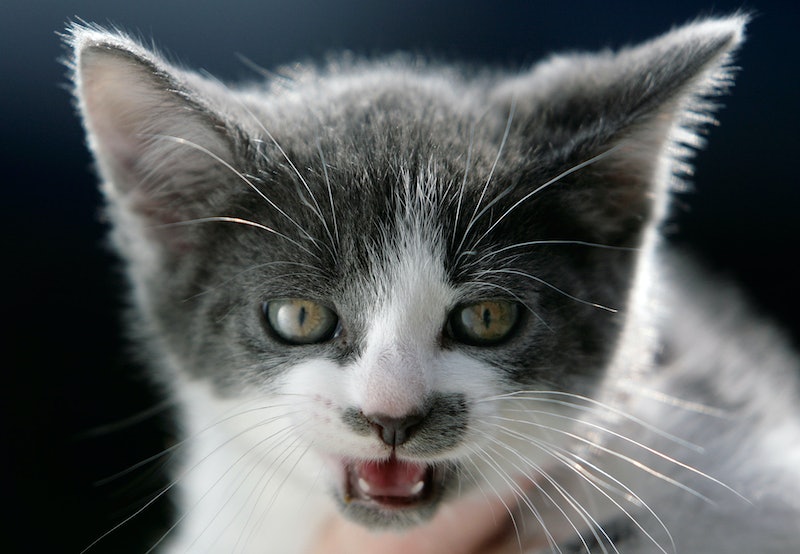 Everyone who has ever been called a crazy cat lady now has reason to rejoice: Gary Weitzman, president and CEO of the San Diego Humane Society and SPCA and coauthor of How to Speak Cat, has officially declared that "it’s okay to be a crazy cat person!" And if you are a companion or distant admirer of cats, you also may be wondering what "meow," "purr," and other cat vocalizations actually mean — you can just tell they're saying something truly profound, and it kills you that you're not in on it. Well, Weitzman has many answers. But first, you need to understand how cats communicate.

Through working with animals for over 25 years and then doing the research for his National Geographic book alongside coauthor Aline Alexander Newman, Weitzman has uncovered some of the secrets behind cat communication. And most of it's good news for cat lovers — because as it turns out, cats are trying to communicate with us. All we need to do is listen. Weitzman recently sat down with Salon to discuss his findings; according to him, these feline communications cues can help you understand your cat and strengthen your human-feline bond. Who ever said cat can't be man's (and woman's) best friend?

1. Every cat has their own language.

There's one hypothesis that cats have 16 meows with 16 different meanings, but Weitzman says all we really know is that each cat has one or two dozen types of meows, and they're different for every cat. "You couldn’t get a Webster’s dictionary or a Fodor’s translation cat-to-English or English-to-cat and define those meows," he says. And not only do different cats have different meows, but also ...

2. Each meow has a different meaning.

Cats "train" humans to perform specific tasks in response to different meows. “'Feed me breakfast' is different from 'play with me' or 'I want to go out,' Weitzman says, and all cat companions know that dreaded "4:30 a.m. 'gimme breakfast.'" He added that if you record your cat, you'll start to notice specific noises corresponding to different contexts.

3. Cats only talk to people.

We can all feel special knowing that, with the exception of kittens, our cats are meowing at us and us alone. "When cats communicate with each other, it’s through body language or it is those vocal warning noises," Weitzman explains. Scientists have suggested that the practice of meowing at humans may have evolved because of the human tendency to take care of creatures that sound like babies.

4. Cats know what you're telling them.

's Joanna Rothkopf asked Weitzman if her cat understands when she meows at him, he responded that cats understand what we're telling them before we even speak: "Dogs and cats can read a mood before we even open our mouths, so making any of those noises of endearment, they know what that’s about." Goodbye to the stereotype of the aloof feline. However, Weitzman qualifies this claim:

Now, are you asking, say, “do you want chicken or tuna?” when you make a chirping noise at your cat? Well, now you’re getting a little specific and I don’t know that I’m willing to say yes to that, but the general context, yeah, absolutely. Animals are always contextual.

5. Cats aren't particularly fond of one another.

While Weitzman's shelter often finds stray dogs huddled together, cats, especially adults, prefer to live in spread-out colonies. Why cats avoid other majestic creatures of their own kind yet curl up on humans' laps is a mystery to me. Is there a word for humans who have the reverse tendency to only enjoy the company of cats? Oh, yes, that's where "crazy cat lady" comes from.

6. If your cat exhibits one of these signs, stay away.

Weitzman lists an arched back, a drawn-back head, and flattened ears as warning signs that your cat is just not having it right now.

7. Cats have their own "handshake."

Well, not exactly — though, as I learned in an elementary school science project employing my own cats as experimental subjects, you can teach a cat to "shake paws" using clicker training. What cats can exhibit without any human instruction is a posture for greeting people: "The tail being straight up is kind of a 'how-do-you-do,' the cat handshake, so to speak," Weitzman says.

If you've ever thought your cat was winking at you, you're not totally delusional: A slow blink is a sign of affection. Though the Associated Press quoted Weitzman as saying "blinking is like a kitty kiss," he denies it: "First of all, I never use alliteration, and secondly, I think that’s a little much for me." However, a cat wink "really does represent affection and acceptance and it’s really quite a gorgeous, subtle, physical movement that they do to show they’re comfortable with us."

Head on over to Salon to check out the full interview.