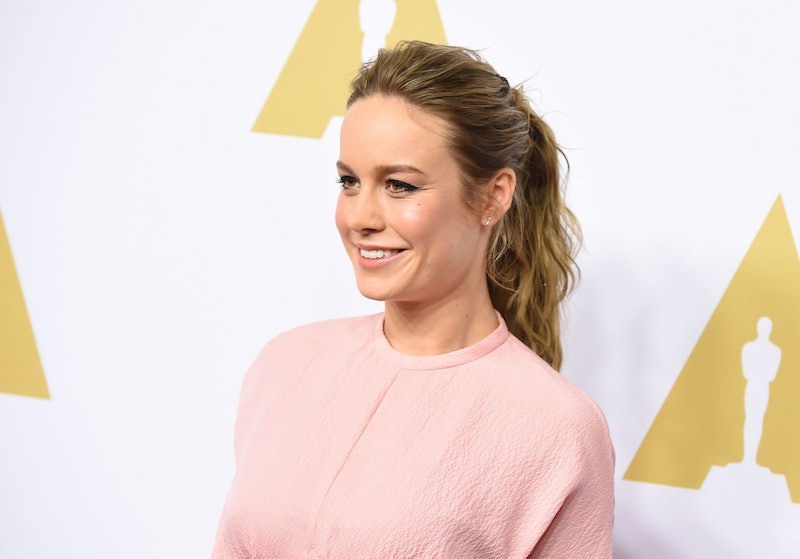 Every awards season has its breakout star, an actor who seemingly comes out of nowhere with a powerhouse performance that secures their future in Hollywood. For 2016, that actor is Brie Larson and that performance was in Room. Larson has already earned a Best Actress Golden Globe and SAG Award for her role as a young mother held in captivity, and fans undoubtedly want to know more about her. She has been at almost every event this awards season, often with her musician boyfriend, Alex Greenwald, in tow. Since he is becoming a fixture next to his girl, I can't help but wonder how did Brie Larson and Alex Greenwald meet?

This question is proving to be difficult to answer, given that Larson seems determined to keep her private life mostly under the radar. Although she chooses to hide some details about her relationship and her personal life, Larson has still taken the opportunity to shared a little bit about her relationship with Greenwald. In a January 2016 profile on The Hollywood Reporter , Larson's boyfriend was brought up and she responded, "I'm not hiding him away in a tower — I'm just trying my best not to… It's a line that is always on the edge of being crossed, and once you cross it, what's next?" The 26-year-old knows the curiosity is there, but simply keeps it that way. She also mentioned him in both her acceptance speeches for her Golden Globe and SAG award wins.

Their relationship seems to have started at some point in 2013. Larson was in a long-term relationship with actor John Patrick Amedori, which ended in 2012. In 2009, Greenwald had a fling with model Agyness Deyn, and it's not clear who he dated afterward or right before Larson, if anyone. In December 2013, Larson thanked Greenwald during her acceptance speech at the IFP Gotham Awards, saying, "And I'd like to thank my boyfriend, Alex Greenwald, for making me pasta and taking care of our puppy while I made this movie."

This leads me to believe that at that point they had at least been together for a few months, considering they already had a puppy together. As for how the met exactly, that remains a mystery. Neither Larson nor Greenwald have publicly spoken about their exact meeting, but it was likely through either mutual friends or just being in the music business. Let's not forget that Larson was a pop star before she was a successful actor, and she released an album in 2005 called Finally Out of P.E. She also flexed her singing talents in her 2010 film, Scott Pilgrim vs. the World, where she sang Metric's "Black Sheep."

Greenwald is a musician (sometimes actor) who was part of Phantom Planet and was a big deal back in the age of The O.C., often working as a producer now. I can imagine that their mutual love of music and experience throughout the years definitely brought these two together even closer, because it is not easy to find someone on the same track as you, especially in Hollywood.

Now, nearly three years into their relationship, they seem more in love than ever. Greenwald has been by his girl's side during what must be the best time of her life and career. After her win at the 2016 SAG Awards, Entertainment Tonight asked Larson about her supportive relationship with Greenwald and she replied, "Oh man, I mean, he's the other half of the equation — how can you explain support? I mean, it goes beyond anything. He's just my person, he's my best friend."

So sweet! However they met back then, it has mapped out perfectly into the awesome couple that they are today.