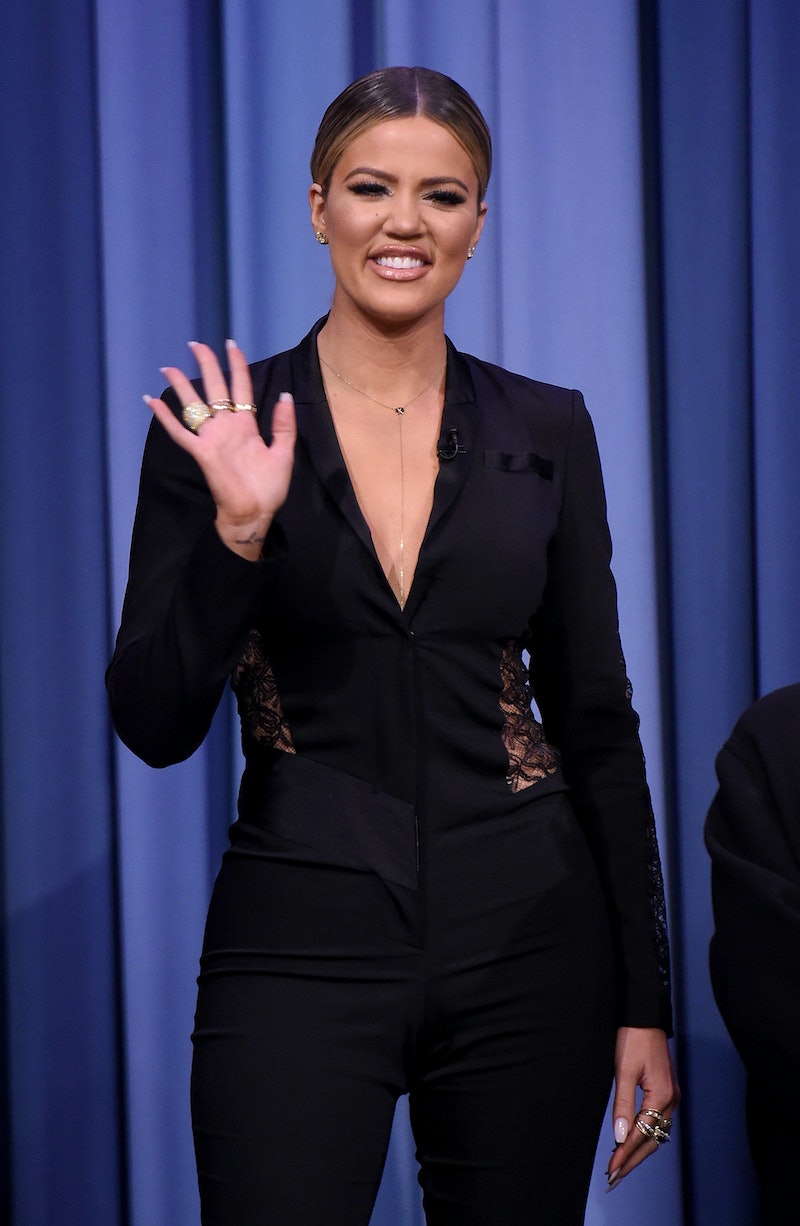 Having been a reality TV staple for nine years now, Khloé Kardashian is no stranger to opening up her private life for the world to see and scrutinize. She and her ubiquitous family have gone from marginally famous thanks to the O.J. Simpson trial to the most famous family in the world, and they've opened their lives up to their most personal struggles, including (but certainly not limited to) divorces and breakups, family fights, and more along the way, showing that no issue is too private to reveal on a reality TV show. Kardashian herself has spoken candidly about her self-esteem issues, but a new post on her website shows a surprising reality of growing up Kardashian.

The 31-year-old has spoken at length about her dedication to fitness and it's inspiring even if you absolutely hate the gym. Her new outlook on exercise comes after opening up about her struggles as the self-described "funny, fat sister," telling People last fall:

Being compared to my sisters was something I was used to. But being compared in such a harsh way … I just thought, "OK, that's my role." So I started saying it before people. I was like, "OK, I'm the fat, funny sister. Who cares?" I almost let that take ownership of me. [In reality] I wasn't fat; I wasn't obese. But I would let society make me believe that I was.

Seemingly capitalizing on her new found confidence, Kardashian has signed on to host her own makeover show called Revenge Body, which doesn't yet have a release date scheduled, but casting is underway to find men and women who have gone through an experience that "has thrown their lives 'off course'" and are looking to "be the best they can be" with the help of top trainers, stylists, and glam squads. Very fitting for a member of one of the most "glam" families ever.

On her website, Kardashian "thought it would be fun" to fill out some of the application questions for the show, and her answers give a revealing glimpse into her life before fame. She writes,

I was really chubby from age 10 to 14, and even teachers would always say to me, "You're really Kim and Kourtney's younger sister?" They wouldn't outright say "you're ugly" or "you're fat," but adults need to realize what their words do to kids. A 10-year-old can still pick up on that energy.

She also shared some sweet childhood photos, and though this isn't the first time Kardashian has admitted to body image issues from a young age, fans may be surprised to know that her insecurities didn't make her an introverted personality.

In high school, I was athletic. I did every sport: volleyball, basketball, soccer, softball. I was super competitive and being on a team was so fun! I was never a cheerleader or goth. I wasn't a party girl, but I was super social. I was liked by teachers and students because I liked to be friends with everyone, especially people who were bullied. I always wanted everyone to be happy and get along.

This definitely sounds like the Khloé that Kardashian fans know and love, but it's eye-opening to see that even when she struggled internally with image issues, that she didn't let it impact her socially. Most people can relate to feeling awkward about your body during puberty and well after, but it's lovely to see that Kardashian never let it change her vibrant, bubbly personality.

She also discusses her most embarrassing moments as a kid, revealing that her volleyball uniform "might not fit" or that salespeople in clothing stores shamed her for her size (albeit indirectly) and that she "never felt comfortable" in a bathing suit with all of her friends. Who among us hasn't felt that way sometimes?

High school is hard even if you grow up to be one of the most famous people in the world as an adult, and hopefully young girls will look to the reality star and feel a bit less alone in their own insecurities. You can say a lot about the Kardashians (and believe me, people do), but Kardashian's message about her own struggles with body image should definitely be applauded and celebrated. You go, girl!