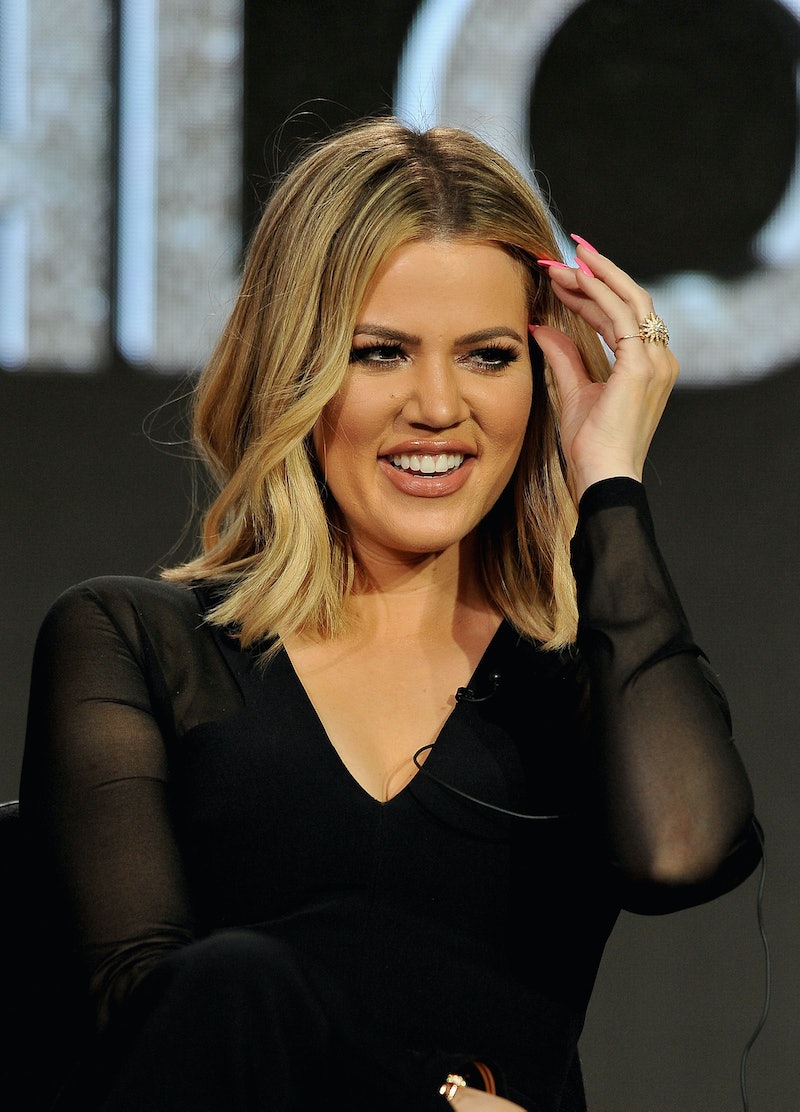 There's been plenty of drama surrounding the Kardashian family lately, or at least coming from a certain in-law. Unsurprisingly I'm referencing Kim Kardashian's husband Kanye West. Needless to say, the whole family frequently finds themselves in the headlines for various reasons. Sometimes the news is positive (like Lamar Odom's first post-hospital appearance), but other times their stories tend to be weighed down in criticism. Khloé Kardashian isn't here for the latter anymore. On Saturday, Khloé admitted she's letting go of toxic people and shared her thoughts in an Instagram post. She shared the quote, "You never really see how toxic someone is until you breathe fresher air," along with a lengthy caption. Here's an excerpt:

Let me remind you that we don't need anybody's approval to be happy in life. It's on you to validate and accept your version of happiness. Take the control back. You choose your life. Don't let anyone else decide for you. We are no victims to life. No prisoners. But we do become victims and prisoners to the people we choose to surround ourselves with. We tend to become content, passive and blind within our relationships. Whether it be a family member, business partner, friend or a lover. Out of comfort and possibly fear. The unknown will leave you stuck in a bad situation. Choosing comfort over your own happiness.

Honestly, I love the fact that the Kocktails With Khloé host is trying to take control back over her life and focus on being happy for her own sake. She's right — who people surround themselves with is a choice, and although it may be tough to get rid of people who have always been there, that doesn't mean it's not worth it. She also wrote,

Giving up is self-defeat. Letting go is self-love. Letting go means putting yourself first instead of holding on to that negative space you don't deserve. Nobody deserves.

Self-love is important, whatever form it may come in. The post was even shared by mom Kris Jenner, who added her signature hashtag #proudmama. You can read Khloé's full caption below.

It's unclear who exactly she's talking about, although a few possibilities come to mind. Here are my best guesses about which people Khloé isn't going to bother worrying over anymore.

In the caption, Khloé does say, "We tend to become content, passive and blind within our relationships. Whether it be a family member, business partner, friend or a lover." The fact that she says "family member" makes me think maybe she's counting Rob as one of these toxic people. After all, her brother used to be her BFF and live with her, but currently resides with his new girlfriend.

Khloé previously got into a fight on Twitter with Amber Rose, who happens to be best friends with Chyna. There's a history of drama there and this Instagram could be herself trying to take herself out of any negativity.

Then again, a few days ago, she posted a throwback photo with Rob, saying she misses him.

In typical Kardashian fashion, there's a lot to keep up with here and I'm pretty konfused. It's also totally possible she realized she misses him, but that she doesn't need the drama.

Although Khloé has a history of staying close with her exes, that doesn't necessarily have to be the case with her latest. She and James Harden split a few weeks ago. However, the circumstances surrounding the break-up are unknown. It seems like it was just a long time coming, since they both had a lot on their plates.

Then again, maybe there's more to the story than the public knows. There could have been more drama beneath the surface, which could serve as a plausible explanation for this Instagram post.

Considering Khloé is never shy about calling out Twitter trolls, maybe she decided to go on a massive blocking spree and rid her mentions of anyone trying to tear her down. If this is the case, I'm all for it. Granted, I don't think this is the most likely option, but negativity is negativity and she doesn't need any of that in her life.

Plot twist: What is the Instagram post is a reference to someone that's not even in the public eye? Anything is possible and maybe there were multiple people who were trying to drag the 31-year-old down. This would make perfect fodder for a future episode of Keeping Up With The Kardashians, wouldn't it?

Although fans may not know who's out of Khloé's life, it sure sounds like she had good reason for getting rid of them. In which case, more power to her! It's only worth sticking by people who are supportive and can help you grow.