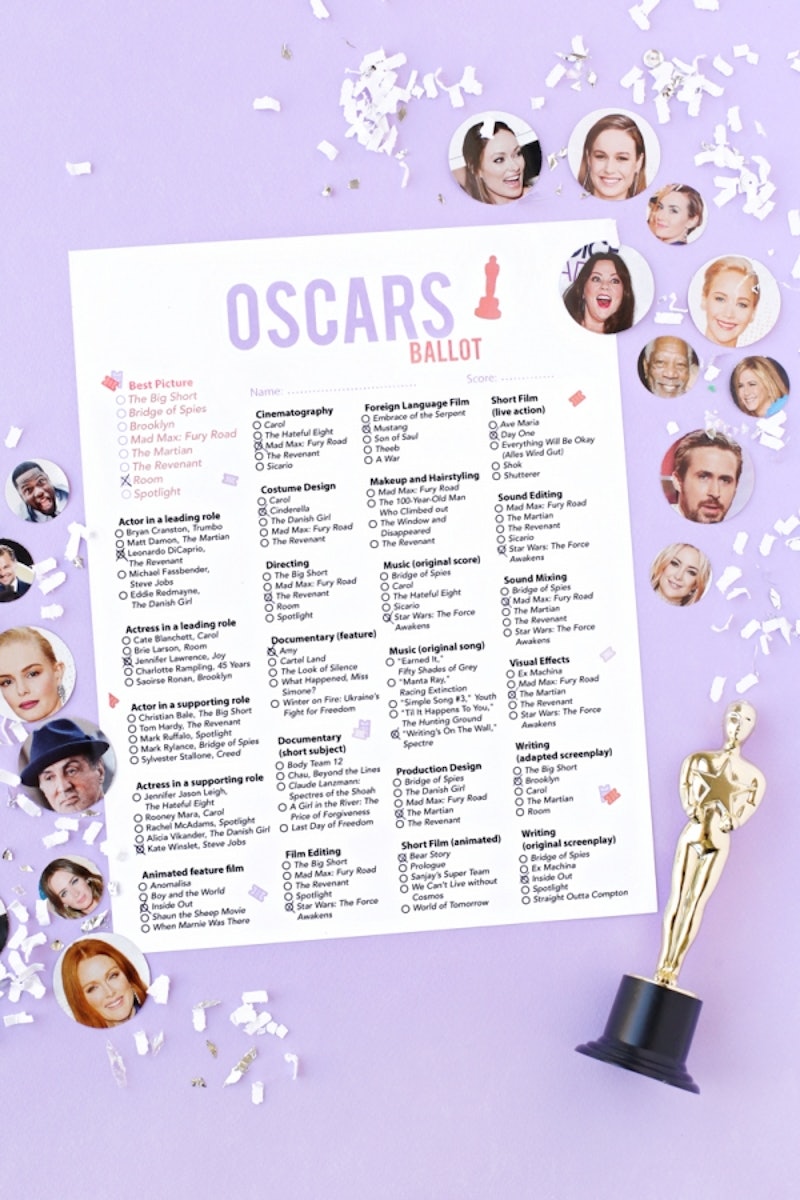 This Sunday is the 88th annual Academy Awards and it’s already a night full of expectations. Specifically, I’m expecting it to be boring. If you are hosting an Oscars party, these Oscar party games are here to add some life to the party. As for the actual show, I can’t promise it’s going to be exciting.

There are a lot of things I'm hoping will happen during this year's awards show. I’m praying that the recent #OscarsSoWhite controversy about the lack of diversity in the Academy Awards will be addressed. I’m hoping this is the year Leonardo DiCaprio finally takes home a gold statue of his own, because I just can’t bear to imagine him crying himself to sleep Sunday night. But above all, I am hoping to finally take home an Academy Award of my own. You see, I am up for Best Party Host, an award I have been dreaming about since I was a child.

In my opinion, the Academy Awards are best viewed in your prom dress, with a champagne flute in one hand and snacks in the other, surrounded by your favorite friends. Of course, any Oscars party we throw won’t come close to the after parties in Hollywood, but we can still have fun. These five Academy Award party games will add the perfect touch to your party, and in the event the show is as boring as I think it might be, have another drink.

StudioDIY puts out an Oscars ballot each year, and this might be my favorite so far. Print these out, pass them around, and collect them before the show starts. The guest who guessed the most right wins a prize! Prizes can range from another glass of champagne, to a Chipotle burrito, to a gift card.

2. Things Leo Should Do For An Oscar

This is a game I made up that is about as simple as it sounds. After you take bets with your guests about whether or not Leo will win an Oscar this year, list all the ridiculous things Leo should have done to guarantee the prize. The person who comes up with the most outrageous suggestion wins. Here’s what I think he should have done:

-Sky dived with a faulty parachute, befriended a bird, and flew the rest of the way down with help from his new pal

I’d love to think that he will be more than a nominee this year — after all he fought a bear this year.

Balloons are a must for any party, if you ask me, and gold statues are so last year. Write your own award titles on these beauties, just like StudioDIY did, and pass them out to your friends that night. Maybe even make them give a thank you speech.

Printable games are usually the easiest for a party like this. Head over to Punch Bowl for a printable Oscars bingo board and get a prize ready for your winner.

For the third and final printable game of the night, I present a throwback to Mad Libs with this fill-in-the-blanks acceptance speech. Which of your friends will have the funniest speech of the night?

“Wow! Is this real? Oh my this award is [ADJ] than I expected. OK, I’d like to thank the [NOUN] for this [ADJ] honor. Working on [MOVIE TITLE] was such an [ADJ] experience. I need to thank our wonderful [JOB TITLE] for all of his hard work on the film. His direction brought this film to [NOUN] and made me a better [JOB TITLE].

I have been [VERB ENDING IN -ING] about this since I was a [NOUN]. I wouldn’t be here without [PERSON] for raising me and supporting me. Oh no, I’m getting the signal to [VERB] it up. Well, thank you again, and if my [PLURAL NOUN] are watching, go to bed!”