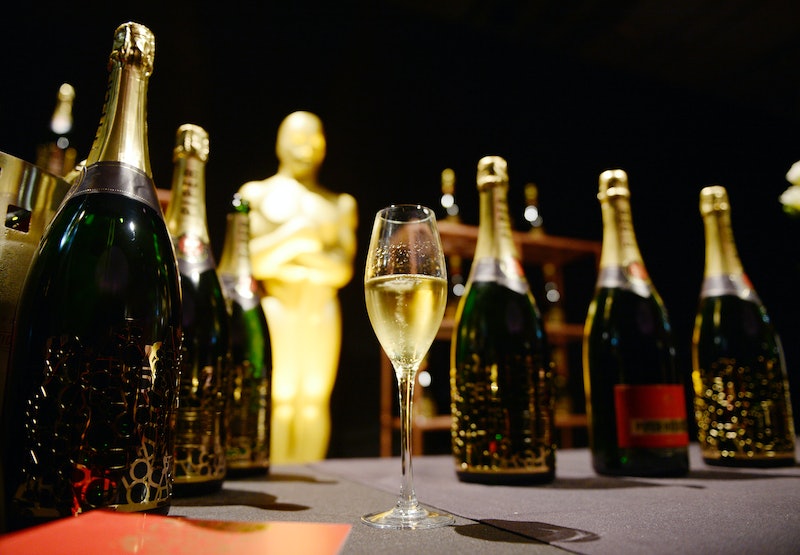 The Academy Awards are largely known as the most important night in the film industry, but as for the most exciting? That's up for debate. While the Golden Globes showcase everyone's favorite celebs sitting around tables downing cocktails like there's no tomorrow, the Oscars feature these same people sitting straight in their seats and politely applauding as their peers ramble through acceptance speeches. Does the difference in vibe have something to do with a lack of alcohol? Can celebs drink at the Oscars, or does everybody just have to wait until the afterparties?

As it turns out, attendees are allowed to drink at the Oscars; it's not a "dry" event, and there is in fact a bar within the Dolby Theatre. That being said, the atmosphere is hardly like that of the Golden Globes (at which 7,500 glasses of champagne are downed each year, according the The Hollywood Reporter). Whereas the Globes have drink service at every table, the bar at the Oscars is outside the physical theater space, and so attendees have to travel back and forth between their seats to get their next highball. It makes it a little harder to get tipsy when you have to climb over other A-listers in your gown every time you want a refill, which may explain why the atmosphere is, well, pretty sober.

That being said, it would appear that last year, the need for a drink was strong enough to motivate some people to ditch their seats; Variety reported that at the 2015 Oscars, "the bar outside the auditorium was busy, and the seatfillers were working overtime, because fewer attendees stayed to watch the show." Similarly, in 2010, Entertainment Weekly kept a running play-by-play of activity at the Oscars' bar, where both winners and losers alike congregated to celebrate their victories and cut their losses.

Of course, I don't think that anyone should have to drink in order to have a good time, but I'd bet that making the alcohol a bit more accessible to attendees would make the three-hour-long show even more entertaining. I can certainly admit that there are a few celebrities who I would love to see get turnt at the Academy Awards, particularly this year (Leo? Meryl? Maybe not J.Law...).

Still, ideally, the 2016 Oscars will be engaging enough that the lack of booze won't make a difference. And that's only for those in attendance — if you're watching at home, never underestimate the power of a good Oscars drinking game. Just because the celebs at the Oscars don't have alcohol at their seats, that doesn't mean the same rules have to apply to you.