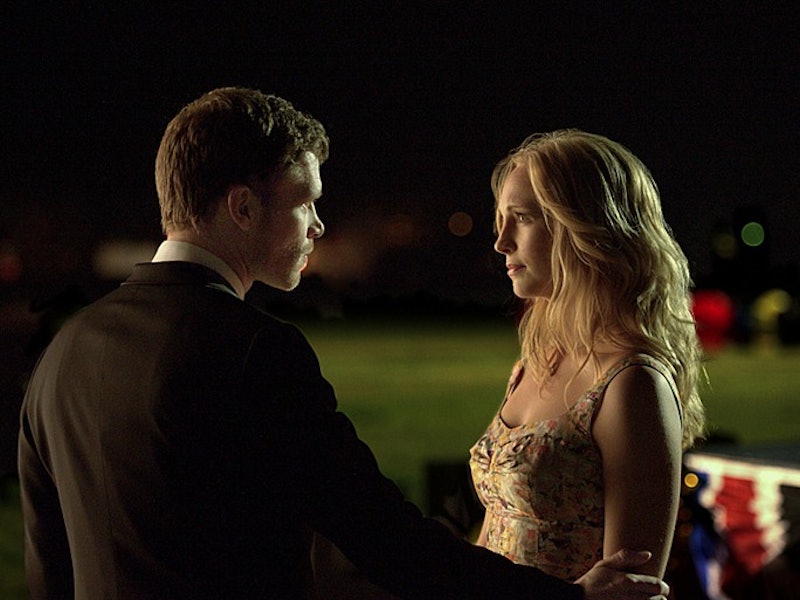 Well, my fellow vampire fanatics, the moment we've all been waiting for is finally upon us. Caroline and Klaus are reuniting on The Vampire Diaries , a prospect which has already sent my hardcore 'shipper heart into overdrive. Ever since these two shared a steamy encounter in the Mystic Falls woods, fans have been dying for a follow-up interaction to how their relationship would progress. And now, thanks to the fact that Caroline is heading to New Orleans to visit Klaus, that dream is finally becoming a reality. The only question that remains is when this is actually happening. When will this Klaroline crossover occur on TVD ? Because, considering this little road trip all takes place three years into the TVD future, we may still have some waiting to do.

Don't get me wrong, I'm grateful that this storyline is just part of our future at all and I'm willing to wait (in the words of Klaus) "however long it takes" to see it all come to pass. But it would still be nice to have a little heads up as to when this will all go down. (You know, so I can plan my freakout accordingly.) Unfortunately, though, I'm afraid it's anyone's guess for the time being. We know that Present-Day Stefan is scheduled to pay a visit to New Orleans this week, but that tells us nothing in regards to when Future Caroline will show up three years later. These TVD flash forwards only last about 30 seconds or so and it's hard to say when we'll actually catch up to that point in the timeline.

But it has to happen by the end of this season, right? Julie Plec wouldn't just leave us hanging for a Klaroline that's never going to come. We just need to have a little more patience, that's all. And just in case you need a little reminder on the subject, here's why this dynamic duo is more than worth the wait and is the ultimate supernatural endgame.

Their Chemistry Is Off The Charts

Every time these two are in a room together, sparks will undoubtedly fly. Whether it involves them fighting or tearing each other's clothes off in the woods, you don't come across that sort of passion everyday. So whatever their interaction leads to, be prepared to take a cold shower afterwards.

They Have So Much To Bond Over

Klaus and Caroline have accomplished something that no vampire thought would ever be possible. They have children. Granted, Caroline was magically impregnated by Jo and Alaric's twin babies, so I guess they aren't technically hers, but she's their mother in every way that counts. And now that her kids will get to meet Klaus' daughter, Hope, their link as supernatural parents could help them to connect on a deeper level than they ever have before.

Neither Of Them Have Settled Down

I can't speak for Future Klaus since he has yet to make an appearance, but I'm willing to bet that he has yet to tie the knot three years from now. As for Caroline, yes she is engaged to Alaric (which still seems really weird, considering they currently have like zero romantic feelings for each other right now), but we don't know the full extent of this engagement. Maybe it's just for show? Either way, though, being engaged is not the same as being married, so there's still a chance that it could be called off.

Then there's the fact that Klaus' relationship with Cami has pretty much failed, much like Caroline's did with Tyler and eventually Stefan. Why? Maybe because the universe is trying to tell these two that they belong together. Just saying!

Obviously, Caroline helps to give Klaus a much needed moral reality check when he lets his anger and pride get the best of him. But, in a way, he also helps to bring Caroline out of her comfort zone of rules and organization in a positive way. Sometimes you need to get in touch with her inner bad side in order to keep life interesting and Klaus has the potential to open her world up to unlimited exciting possibilities. They compliment each other in the best way and that's something that deserves to be explored.