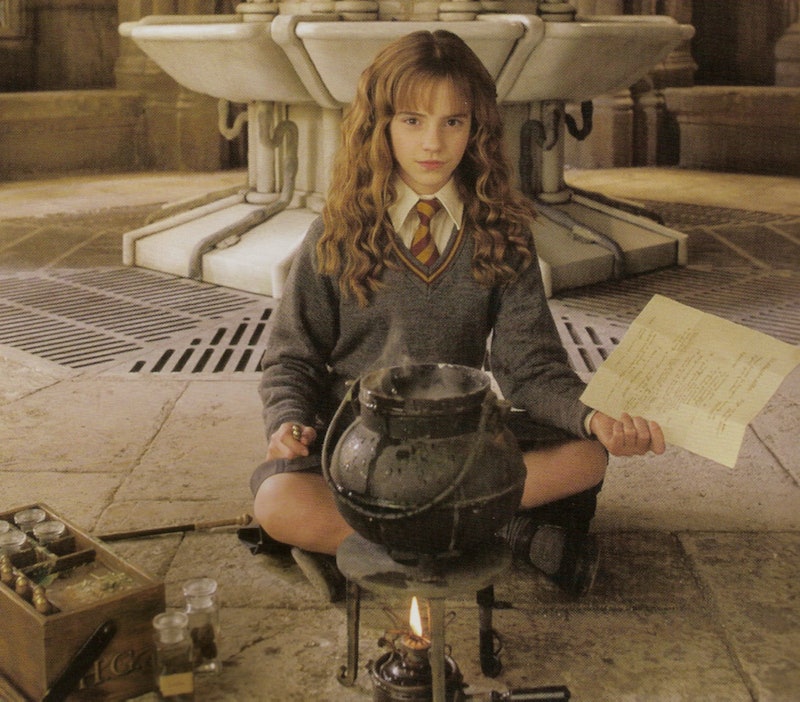 We learned a lot of life lessons from Harry Potter from an early age. We learned that true friendships are worth fighting for. We learned that love is the most powerful force of magic. And we learned that if something has gone missing, the nargles are probably to blame.

Harry Potter was so important to me, because I learned many of these lessons with the characters. I know I didn't take the same classes as Harry and Ron — no matter how much I wished I could take transfiguration and potions — but I essentially grew up with the Hogwarts gang. We fought our own battles and faced our teenage problems together. Now, we're all grown up, and applying those lessons to our lives.

J.K. Rowling taught us many things. One of her most important lessons was to keep our minds open to learning. When it doubt, always go to the library. And don't be afraid of failure, because without it, we wouldn't learn. Here are 20 inspiring, funny, and wonderful quotes about the magic of learning from Harry Potter:

1. "Because that's what Hermione does,' said Ron, shrugging. 'When in doubt, go to the library."

― Harry Potter and the Chamber of Secrets

2. "So teach us something worth knowing,Bring us back what we've forgot,Just do your best, we'll do the rest,And learn until our brains all rot..."

3. "'Do you mean ter tell me,' he growled at the Dursleys, 'that this boy—this boy!—knows nothin' abou'—about ANYTHING?'Harry thought this was going a bit far. He had been to school, after all, and his marks weren't bad.'I know some things,' he said. 'I can, you know, do math and stuff.'"

4. "Finally, the truth. Lying with his face pressed into the dusty carpet of the office where he had once thought he was learning the secrets of victory, Harry understood at last that he was not supposed to survive."

5. "The presence of hundreds of books had finally convinced Hermione that what they were doing was right."

6. "'Oh, are you doing magic? Let’s see it, then.'She sat down. Ron looked taken aback.'Er — all right.'He cleared his throat.'Sunshine, daisies, butter mellow,Turn this stupid, fat rat yellow.'He waved his wand, but nothing happened. Scabbers stayed gray and fast asleep.'Are you sure that’s a real spell?' said the girl. 'Well, it’s not very good, is it? I’ve tried a few simple spells just for practice and it’s all worked for me. I’ve learned all our course books by heart, of course.'"

7. "'Which came first, the phoenix or the flame?''Hmm . . . What do you think, Harry?' said Luna, looking thoughtful.'What? Isn’t there just a password?''Oh no, you’ve got to answer a question,' said Luna.'What if you get it wrong?''Well, you have to wait for somebody who gets it right,' said Luna. 'That way you learn, you see?'"

8. "It matters not what someone is born, but what they grow to be.”

― Harry Potter and the Goblet of Fire

9. "Or yet in wise old Ravenclaw, if you've a ready mind, Where those of wit and learning, Will always find their kind."

11. "You are here to learn the subtle science and exact art of potion-making. As there is little foolish wand-waving here, many of you will hardly believe this is magic. I don't expect you will really understand the beauty of the softly simmering cauldron with its shimmering fumes, the delicate power of liquids that creep through human veins, bewitching the mind, ensnaring the senses. . . I can teach you how to bottle fame, brew glory, even stopper death — if you aren't as big a bunch of dunderheads as I usually have to teach."

12. "Potter is mocked by a faculty member for the idea that there is evil in the world from which even children need to learn to defend themselves by the actual practice of doing so rather than familiarity with theory."

13. "'I'll fix it up with Mum and Dad, then I'll call you. I know how to use a fellytone now—''A telephone, Ron,' said Hermione. 'Honestly, you should take Muggle Studies next year...'"

― Harry Potter and the Prisoner of Azkaban

14. "Don’ you worry, Harry. You’ll learn fast enough. Everyone starts at the beginning at Hogwarts, you’ll be just fine. Just be yerself. I know it’s hard. Yeh’ve been singled out, an’ that’s always hard. But yeh’ll have a great time at Hogwarts — I did — still do, ’smatter of fact."

15. "You can try, but you seem cleverer than Fudge, so I'd have thought you'd have learned from his mistakes. He tried intervening at Hogwarts. You might have noticed he's not Minister anymore, but Dumbledore's still headmaster. I'd leave Dumbledore alone, if I were you."

― Harry Potter and the Half-Blood Prince

16. "That's what they should teach us here. How girls' brains work... It would be more useful than divination, anyway..."

― Harry Potter and the Chamber of Secrets

18. "This isn't your average book, it's pure gold: Twelve Fail-Safe Ways to Charm Witches. Explains everything you need to know about girls. IF only I'd had this last year I'd have known exactly how to get rid of Lavender and I would've known how to get going with... Well Fred and George gave me a copy, and I've learned a lot. You'd be surprised, it's not all about wandwork, either."

19. “This is precisely why I loathed being a teacher! Young people are so infernally convinced that they are absolutely right about everything. Has it not occurred to you, my poor puffed-up poppinjay, that there might be an excellent reason why the Headmaster of Hogwarts is not confiding every tiny detail of his plans to you? Have you never paused, while feeling hard-done-by, to note that following Dumbledore's orders has never yet led you into harm? No. No, like all young people, you are quite sure that you alone feel and think, you alone recognize danger, you alone are the only one clever enough to realize what the Dark Lord may be planning.”

20. "It is impossible to live without failing at something, unless you live so cautiously that you might as well not have lived at all, in which case you have failed by default."