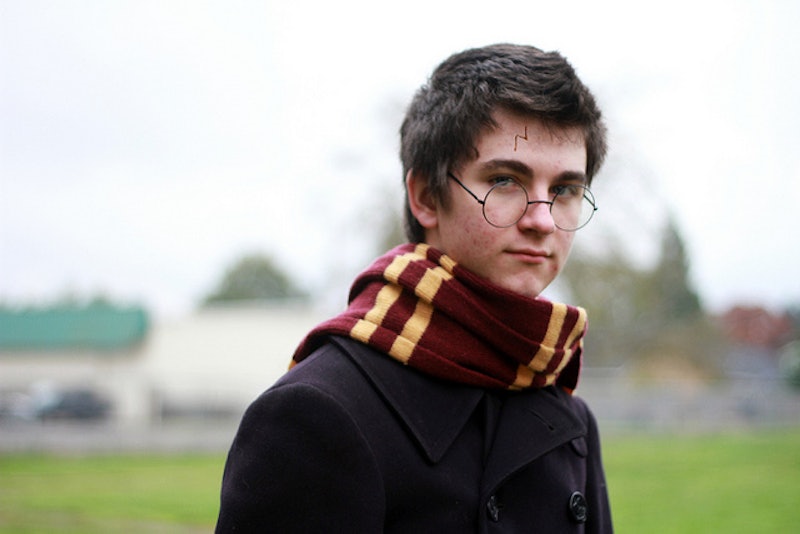 I grew up reading the Harry Potter books, and they were a huge part of my childhood. They showed me how to maintain meaningful friendships, taught me to stick up for my beliefs, and even had a thing or two to say about dating. Yes, Harry Potter taught me about love, and I am not embarrassed to admit it.

From The Greatest Series Of All Time, I learned that "the one" might be right before your eyes, even when you least expect it. After reading the books, I know you should never wait too long to tell someone how you feel, and that you stand by those you love, no matter what. But growing up reading Harry Potter also taught me something else entirely: Harry Potter fans make the best partners in love and in life. HP fans have the best imaginations, and it probably has something to do with their undying love of reading. They value friendship and even appreciate their parents (and you know what they say, you can tell a lot by someone by the way she treats her mother.)

But how can you tell if you're lucky enough to have snagged a real Harry Potter fan? I'm not just talking about someone who watched the movies and never read the books, but someone who knows Harry's birthday and Ron's favorite dessert. How do you know if you have a genuine, book-loving, Dumbledore-worshiping, Harry Potter fan through and through? Here are 11 signs you are dating a true Harry Potter fan. (If this applies to you, consider yourself lucky.)

On Your First Date, She Asked What House You Were Sorted Into

After the normal questions — where are you from, do you have any siblings, what is your favorite hobby — the person you're dating immediately asked you what house you were sorted into. She was a Gryffindor, but she was, thankfully for you, open to the idea of dating a Hufflepuff.

His Bookshelves Are Lined With Books By J.K. Rowling...

Of course the person you're dating has the seven Harry Potter books — I mean, who doesn't? — but he has multiple editions of each installment. We're talking original hardcover, paperback editions, collector's editions, and even a signed collection. The shelves are also lined with Fantastic Beasts and Where to Find Them, The Tales of Beedle the Bard, Quidditch Through the Ages, and so much more by J.K. Rowling.

... And There Closets Are Full Of Hogwarts-Inspired Clothing.

Your first night staying there, you asked your new S.O. to borrow something to sleep in, and you were handed a worn T-shirt with the Hogwarts emblem on it. When the weather turned, you noticed all of his scarfs, hats, and gloves were gold and maroon. The job interview he was so excited about? Yeah, that was a Gryffindor tie, like the one the students wear.

Her "Most Frequently Visited" Webpage Is Pottermore

You Never Argue — Unless It's About Harry Potter.

You're blessed to be one of those couples who don't argue over where to go out to eat, why one of you didn't text the other, or who should do the dishes. You do, however, argue intensely over who Harry should have ended up with or which is the best Hogwarts house, because you and your S.O. are just that passionate about it.

When You Lose Something, He Always Suggests The Nargles Took It

When you're frantically searching his apartment for your lost keys or missing lip gloss, instead of helping you look, he starts talking about Nargles. There is no way that your boyfriend accidentally moved your belonging — it had to be something supernatural, because how else do things go missing, right?

Your Couples Costumes Are Always Inspired By Harry Potter

The past few Halloweens, you've been Ron and Hermoine, Harry and Ginny, and even Vernon and Petunia Dursley. When you try and suggest Romeo and Juliet or (gasp!) Katniss and Peeta, it's like you're suggesting the two of you break up. It's Harry Potter or bust, and that applies to all things, including costumes.

When you start dating someone, she's full of sweet words and promises. She swears to be faithful, promises to care for you, and tries and guarantees she'll never hurt you. If you're dating a HP fan, however, she'll take it to the next level. She promises to protect you from Dementors and swears (with an unbreakable vow) that she will always be there, Patronus at her side, to protect you no matter what evil magic comes your way. You mostly wish she'd protect you from her own mother, but, hey, it's the thought that counts.

Your Romantic Getaways Are Harry Potter-Related

While you've suggested the Bahamas or maybe a European backpacking trip, the person you're dating shoots you down because you still haven't seen the castle used for filming in the movies. Since dating, you and your beau have been to King's Cross Station in England, Edinburgh, Scotland, the Wizarding World of Harry Potter in Orlando, and there's plenty other Harry Potter-themed vacation destinations of your bucket list.

When You Talk About Your Future Kids' Names, Severus Is At The Top Of The List

...and so is Harry, Ron, Hermoine, Luna, James, Lilly, and every one of your significant other's favorite characters' names. Since their dog is already named Hagrid and their cat is called Minerva, you know he isn't kidding about this one either.

The First Time You Said "I Love You," He Answered With "Always"

The stars were bright, the candles were low, and it was the perfect evening to finally say "I love you." When you built up the courage to say the words, your beloved answered with one word: "Always." You were offended at first, until you realized what he was really saying was that he always has and always will love you too, Snape-style.

More like this
16 Novels That Paint A Realistic Portrait Of Abortion
By K.W. Colyard
At 14, Jenny Han Wrote Rom-Coms About Her Friends & Fan Mail To Leo DiCaprio
By Alyssa Lapid
Passive Aggressive Examples To Look Out For In A Partner
By Jessica Estrada
Are Quality Time & Words Of Affirmation Love Languages Compatible?
By Lexi Inks
Get Even More From Bustle — Sign Up For The Newsletter