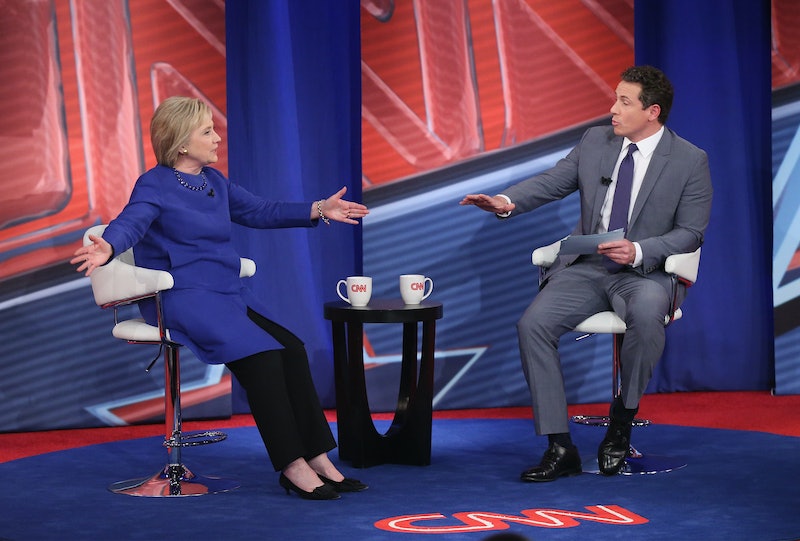 While the GOP presidential candidates awaited a decision by Nevadans on which Republican is most worthy of the White House, Hillary and Bernie got their town hall on in South Carolina Tuesday evening. Taking questions on everything from taxes to Guantanamo Bay, the Democratic presidential hopefuls made their platforms available to American voters for the umpteenth time. And in what might have been an attempt to make CNN's discussion with the Democratic candidates exciting enough to consider changing the channel from coverage of the Nevada caucus, host Chris Cuomo brought Queen Bey into the conversation. Hillary Clinton was asked about Beyonce's Super Bowl performance, and her response made the issue totally not about Queen Bey.

Clinton didn't provide her personal opinion of the artist, and went so far as to point out that who was singing didn't really matter. What mattered to the frontrunner candidate in the context of the halftime show was its focus on police brutality, which is a real issue for Americans across the country.

We have problems in our criminal justice system in a lot of places that we can't ignore. Put aside any particular celebrity, or any particular song or performance. The fact is that we have too many instances here in South Carolina.

The former secretary of state made sure to emphasize the fact that there are plenty of police officers who do their work honorably and said that the American people should show those members of law enforcement the respect they deserve. But Clinton in no way dismissed the high prevalence of instances of police brutality.

We have lost too many young people, so what's the answer? I don't think the answer is for us to find ourselves in opposing camps where we're just going to be looking at each other with mistrust. We have to figure out how we're going to lift up the good practices...

The halftime show, in some ways, furthered the polarization of groups in support of and critical of law enforcement. And Cuomo's question to Clinton sought an answer as to which camp Clinton stood behind. But, despite the fact that viewers may have been on the edges of their seats just waiting to hear whether or not Hillary was all-out Team Bey in the context of her intense halftime show, Clinton refrained from siding with any one person and instead went for the diplomatic response.