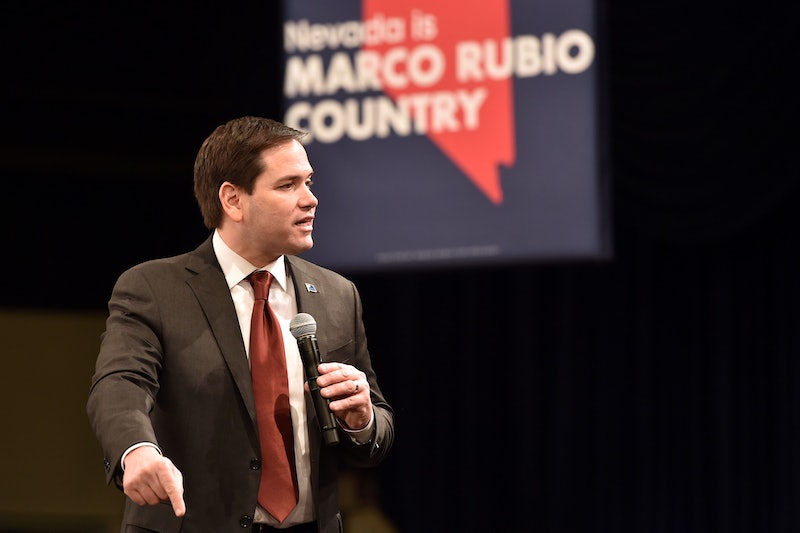 The Marco Rubio campaign must have been a little shaken before Nevada. Given that the candidate has yet to win a primary, a third-place finish would have been a blow. But as the votes trickled in overnight, it became clear that he would come in second — a little over two points ahead of Ted Cruz. (You'd have never guessed that from Cruz's speech Tuesday night, though.) Rubio's loss was still a loss. According to Cruz, the race should be down to just two candidates: Donald Trump and himself. So second place didn't cut it. Rubio's loss shows that he needs to win some serious delegates on Super Tuesday if he's to position himself as the candidate to take on The Donald.

It's true that only Trump and Cruz have won in states leading up to Super Tuesday — and some are betting that one of the two will come out the winner. But Cruz's Iowa win was not decisive enough to count anyone out, and Rubio has come in second in both South Carolina and Nevada, giving him some definite momentum. Plus, he's got the GOP establishment rooting for him now that Bush is out. So don't expect him to drop out. That's not going to happen — at least, not before Super Tuesday. Next Tuesday will be the make-or-break moment for Rubio.

Ideally, Rubio would come in first to stay in play. Even one state would work. Unfortunately, the polls aren't looking good, although he is polling second nationwide ahead of Cruz. In other words, it probably won't happen. Meanwhile, Cruz might even win his home state of Texas, which is an easy and delegate-rich target for him. So Rubio has to take home as many delegates as he can elsewhere. Currently, Cruz is only ahead by one delegate, and his campaign seems to have lost a lot of enthusiasm and forward momentum, finishing third three states in a row.

Rubio didn't give a speech Tuesday night, so we don't really know what he's thinking. He's going to have to shake some things up to make this happen, though. Although the poll numbers show him coming in second place in some states, lots of the states have thresholds between 10 and 20 percent — an easier task with fewer candidates, but something that could still hold Rubio (and Cruz, for that matter) back.

If his camp can use the entrance poll statistics to fine-tune his message, he might have a chance of stealing some votes from Trump. He does best among voters who value a candidate who "can win," but polled among the worst with those who want a candidate who "tells it like it is." Maybe he should try combining the two, clearly painting the picture why Trump is not America's guy. Past attacks haven't worked out so well — at least, not for Jeb Bush — but something has to change if Rubio's going to gain enough momentum to get some delegates on Super Tuesday and stay in the race.