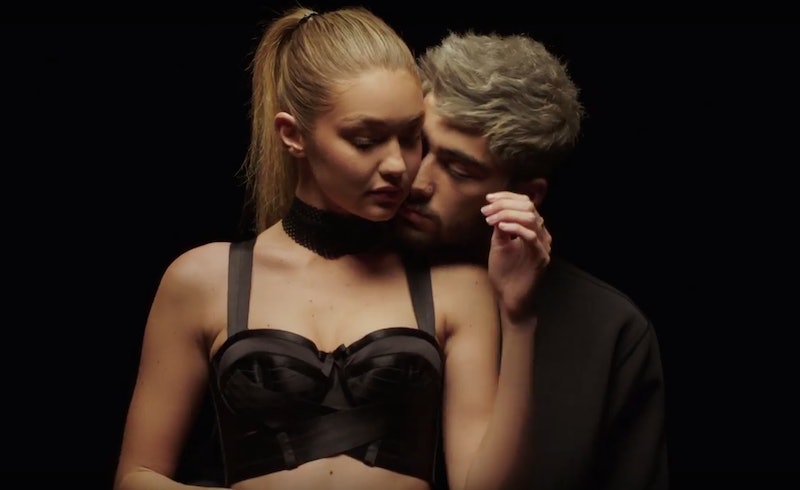 After months of rumors and speculation, this famous couple finally confirmed they are dating after months of speculation, and they went even further by posting the cutest photo ever on Instagram. In Hollywood, it seems the more we get used to seeing a new couple together, the more that couple starts to look alike. Take Kim Kardashian and Kanye West, for example. Ever since Kim K officially became Mrs. Kardashian West, she has been color-coordinating her outfits to her hubby's, from matching Yeezy sneaks to monochrome camel ensembles. Now, another hot young couple seems to be drawing fashion inspiration from one another, because Gigi Hadid and Zayn Malik are basically style twins.

Some people may think it's cheesy to be rocking your boyfriend's tee shirt for all the world to see, but when you style it as well as Hadid does with a thin black choker, it's adorably chic, at least IMO.

The supermodel and the singer each have their own sense of badass individual style. Hadid is notorious for her sexy sporty style which combines feminine silhouettes with on-trend athleisue-type pieces. Malik, on the other hand, is all about black, leather, and edgy threads. They are both killer on their own, but when their style is combined together, it's especially beautiful.

They look like a walking ad for a denim company, don't they?

She's the ying to his yang.

Couples who dress together, stay together.

They both look so fabulous in hats.

I can't handle the chic.

It looks like some of Malik's edgy rocker style has rubbed off on Hadid.

More like this
A Comprehensive Look At Blake Lively’s Glamorous Style
By Allie Fasanella
Machine Gun Kelly Wore A $30K Diamond Mani To The BBMAs
By Paris Giles
How To Master Baby Braids, According To TikTok
By Tomi Otekunrin
Emily Ratajkowski Just Wore A Totally See-Through Dress
By Dominique Norman
Get Even More From Bustle — Sign Up For The Newsletter