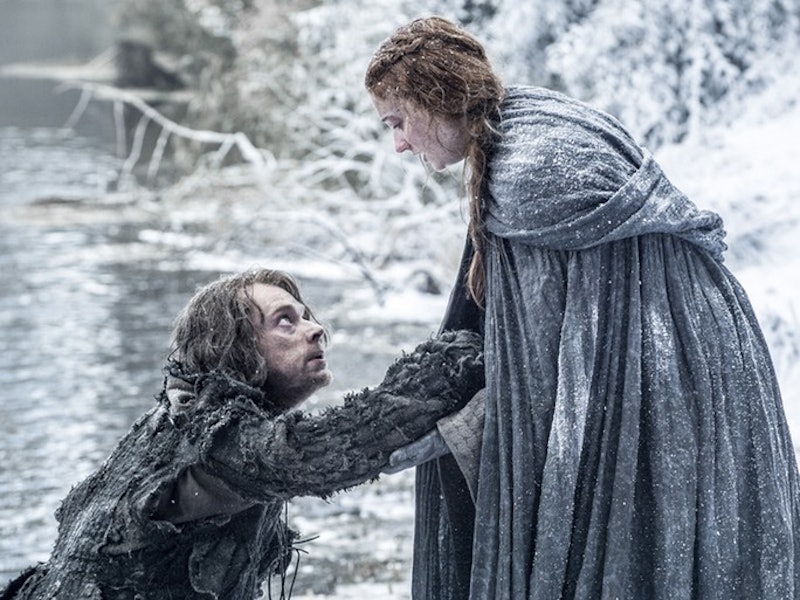 We're still two months away from the premiere of Game of Thrones Season 6, but that hasn't stopped any of us from obsessing about it, right? After all, the Season 5 finale left so many stones unturned, and we've had nothing but time to ponder some pretty big questions: Is Jon Snow really dead? Will Cersei rise again? Did Sansa and Reek survive that jump from the tower? I could go on and on here, but I think you get the point. Game of Thrones is just one of those shows that takes over your entire life — even between seasons, when there are no new episodes and next to zero spoilers. The struggle is real.

One way to quell the loneliness of no new GoT is to get following the accounts of cast and crew on Twitter, as well as accounts that are dedicated to the show at large, since they tend to hear all the hot gossip (even if it literally is just rumors that never come to pass). If you're into the whole social media thing — and let's be real, who isn't these days? — you're probably following all the major stars of the series, but here are some other accounts to add to your follow list and sit back and enjoy a feed full of Game of Thrones bliss.

The official HBO Twitter account for the show is probably already on your list, but it's worth mentioning again just in case it's not. If you're looking for official news on the show, this is the account that will announce it first. They also retweet fans and interesting articles about the show, which is fun.

Similar to the official account, only this one is unofficial (duh). They're probably not going to post anything that new and exciting that you wouldn't find on the HBO account, but do you really need an excuse to have more Game of Thrones stuff in your feed? I don't think so.

If there's one thing I love as much as Game of Thrones, it's memes. Thankfully, the two are combined on this account, and it provides a bit of much needed levity in the face of the absolute travesty that is the show from time to time (I mean in terms of what's happening on the show, not that the show's a travesty — come on!).

If you love the actors who play your favorite GoT characters as much as the characters themselves, look no further. This account posts photos of the actors out and about, attending different events and being their badass selves. There's no real purpose to it, but do pretty pictures really need a purpose?

If you often find yourself thinking of the great lines on the show and want a daily reminder in your feed, then here ya go. This account posts several quotes a day from various characters and episodes. I'm game (pun very much intended).

I like pretty artwork, and Game of Thrones' high budget status means it gets some pretty incredible cinematography. Plus, fans around the world create amazing art inspired by the series. This account posts the latter, and it's seriously beautiful.

You like Game of Thrones? You like gifs? This account has them both in one place, and you won't be sorry you followed. They update daily and will make any feed a better place.

I like feeling like my opinion matters, even if it's just given online to people I don't know and never will. That's why this account speaks to me so much. They ask questions daily and let you cast your votes and check out what other people think, too. Some opinions are downright baffling.

I'm not really sure what the point of this account is, other than that it features GoT gifs, pictures, and other "reactions" to the show. Don't ask me, just follow.

Another unofficial news account for the show, they post a little bit of everything and manage to dig up some interesting tid-bitty (is that even a word? Whatever!) articles that give little hints on what we can expect in upcoming episodes. A must-follow for any GoT fans!

Do you need a reason to follow Jon Snow himself? I don't think so. See? Told you he's not dead.