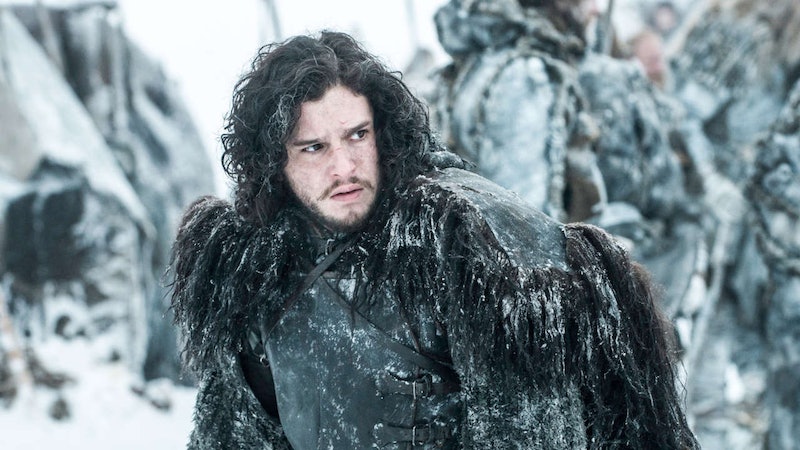 When it comes to next season of everyone's favorite HBO fantasy series, one thing is for certain — Game of Thrones Season 6 is going totally off-script. As announced earlier this year, George R. R. Martin, the one true king of Westeros, won't be releasing the sixth book of the A Song of Ice and Fire series before the sixth season of the hit HBO show premieres in April. This means that the possibilities of what could happen next on the series is seemingly endless — the series no longer has the book to guide it in any direction, so it's sort of moving blindly. With that in mind, though, there are still a few things that absolutely will not happen during Game of Thrones Season 6.

I personally find it exciting that for once in the history of Game of Thrones, A Song of Ice and Fire readers and TV viewers alike are totally in the dark about what twists and turns the show will take next. Like, maybe Daenerys Targaryen and Littlefinger will meet and totally fall in love until Littlefinger says something creepy and Khaleesi has her dragons murder him. WEIRDER THINGS HAVE HAPPENED.

OK, maybe mark that as something that will definitely never happen in a million years on the show. But! There are a lot more plausible storylines that we probably won't see in Season 6, either. Like:

While Season 5 ended on the cliffhanger of whether Jon Snow would live or die following his attack by the Night Watch, it is now pretty much agreed upon that Jon Snow is gonna live. How Jon Snow lives/is resurrected is where the real questions lie, though.

Melisandre, also known as the lady who burned a small child alive, is seemingly here to stay on Game of Thrones. While I desperately hoped this character would make like a lot of other GoT characters and just die already, all signs point to Melisandre being instrumental in Jon Snow's return. And while I am really excited that Jon Snow lives, the same cannot be said for Melisandre. Bah humbug.

Euron Greyjoy, uncle of Theon Greyjoy, has a large part in the A Song of Ice and Fire series, but he has yet to appear on Game of Thrones. Danish actor Pilou Asbaek has been cast as Greyjoy, though — and if the books are any indication, this is a really big deal. Be prepared to met your new favorite brutal and extremely temperamental character. While it has taken a couple of seasons for Euron to appear, don't doubt his importance.

The Lannisters and their influence on the Iron Throne has slipped significantly since the shows's first season. And this past season saw the greatest decline of the once great house. I would not expect the Lannisters to make a comeback in Season 6 — it's all downhill from here for them.

George R. R. Martin originally intended for A Song of Ice and Fire to be a trilogy. When that was still his plan, the third book was originally titled "The Winds of Winter" and was rumored to feature Daenerys' long-anticipated journey across the narrow sea. Then, plans changed, the series was expanded, and the third book was renamed A Storm of Swords. Fast-forward to now, and the sixth book is titled The Winds of Winter. That is a pretty good indication that, in the sixth season, Dany is probably headed to Westeros.

Sansa Being A Wallflower

Astutue fans have noticed Sansa Stark, played by Sophie Turner has been spotted filming battlefield scenes — this has lead many to believe that Sansa will be playing a more active role in the Stark family's quest for revenge in Season 6. Regardless of whether this is true or not, one thing is for certain — after last season, the passive Sansa of previous seasons is long gone.

An Easy Season For Sawmill Tarley

Poor Samwell Tarley. First, his best friend is killed (sorta) and then his horrible family shows up. Yup, that's right — viewers are finally going to meet the Tarly family. James Faulkner from Da Vinci's Demons has been cast as Sam's father, Lord Randall Tarley, and if the books are any indication, he is as awful as Sam has described. Poor, poor Sam.

Aegon Targaryen is the son of the late Rhaegar Targaryen and Elia Martell. In the books, when Tyrion is abroad Shy Maid, he meets a man claiming to be Aegon. This maybe-Aegon says that he was smuggled from the King's Landing as a child. Since Game of Thrones did not feature Aegon last season, it is likely this character will continue to be admitted from series.

While George R.R. Martin says Stannis is still alive in the realm of the books, Game of Thrones director David Nutter said at a 2015 Comic-Con panel that while not explicitly shown on screen, Stannis Baratheon is dead as a doornail.

So there you have it! Everything that will not under any circumstances occur in Season 6 of Game of Thrones. One thing I do know: Whatever does conspire, it will be the best thing on television.