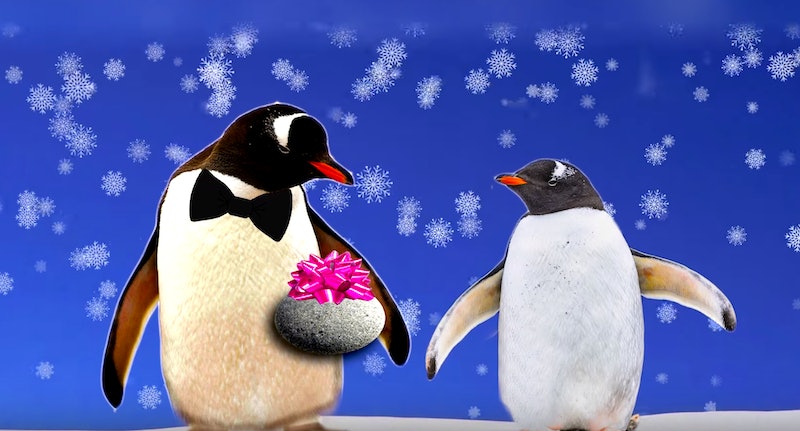 If you’re confused and overwhelmed by the complex mating rituals of the Millennial human, you can take comfort in one thing: At least you don’t have to do some of the bizarre things that animals do before sex (er, unless that’s your thing, of course. #nojudgment). From regurgitating food into each other’s mouths to sampling a potential mate's urine, animals are into some kinky stuff, and they make humans, with their 50 Shades of Grey and their “Netflix and Chill”-ing, look super boring.

This informative, sometimes stomach churning, video from BuzzFeed highlights some of the animal kingdom’s craziest kinksters, from the lady sloth who hangs out on a branch and literally screams for her man, to the giraffe, who is...into water sports. But not all of these animals are so different from us: The male lynx spider wraps up his food in webbing and presents it to his chosen lady-spider. That’s not so different from taking someone out for dinner, is it? (OK, so the usual human dinner date doesn’t involve dead insects, but it’s sort of close, right?)

I think my favorite is the gentoo penguin. When a male penguin wants to mate, he gives a pebble to his beloved. If she accepts it and adds it to her nest, then she’s agreeing. The head keeper at the Edinburgh Zoo explains that, during the penguins’ mating season at the zoo, “we do witness lots of pebble motivated squabbles.” What’s better than imagining a bunch of adorable penguins bickering about who gets the best pebbles?

Check out the whole video below: