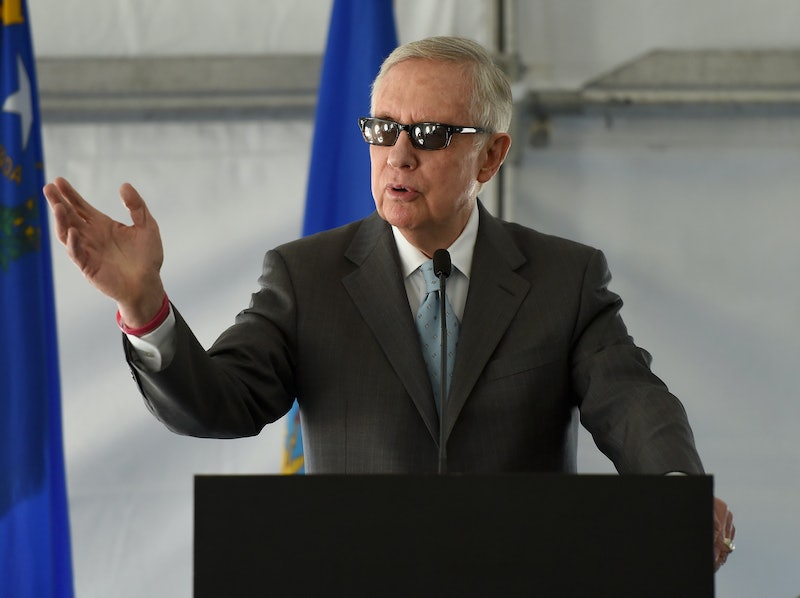 On Wednesday, in a move that comes as little surprise following her crucial win in the Nevada caucuses, a certain Democratic presidential frontrunner picked up a big endorsement from a powerful party elected official. Nevada Senator Harry Reid has endorsed Hillary Clinton. It's an obvious reflection of whom the party's upper echelons are siding with so far.

Reid, 76, is one of the most powerful elected Democrats in the country. Formerly the Senate Majority Leader during the early years of the Obama presidency, he has been Minority Leader since the GOP wrested control of the Senate. Reid is about as close to a classic party overlord as it gets in Nevada. That was made apparent during the caucuses. In fact, according to Jon Ralston of USA Today, Reid successfully lobbied casino executives to let their employees off work in time to caucus, boosting Clinton's union support, particularly in the Silver State's Latino population.

In other words, this endorsement is not a shock or a revelation. On the contrary, the fact that Reid withheld his endorsement until after his home state's caucuses was the subject of some confusion and speculation heading in. Now, however, he's made it official.

So yeah, maybe this isn't the most earth-shattering news. But if you've got a vested interest in the race between Clinton and Vermont Senator Bernie Sanders, one notable element to Reid's endorsement might interest you. (Despite the fact that turnout has been down across the board for the Democrats so far, thousands of people are still working and arguing themselves dizzy for each candidate's cause.)

In short, an endorsement from Reid is worth more than your standard-issue endorsement from, say, some high-profile private citizen. That's because Reid is one of those ever-controversial superdelegates — the oft-criticized figures who have been making headlines in 2016, just as they did in 2008.

Superdelegates basically perform the same function as the delegates whom the candidates win through state caucus and primary races, in that they cast the votes at the Democratic National Convention which actually pick the party's nominee. But the superdelegates (there are 712 of them in all) don't have to vote for the same person whom their states chose. Nor are they elected by the people. Rather, they're made up mostly of party officials, and they can vote to nominate whomever they want ― which is much more concerning for a relative outsider to the party, like Sanders. As such, Reid's endorsement doesn't just mean "Hey, Harry digs Hillary!" It also means that she's one tiny step closer to cinching the nomination, because it means he'll be casting his vote for her when the convention takes place in late July.

Love politics? Love Hillary Clinton? Love love songs? Whatever you're into, you'll love how our lifestyle editor Emma Lord fused Hillary Clinton and power ballads together for one unmissable track...