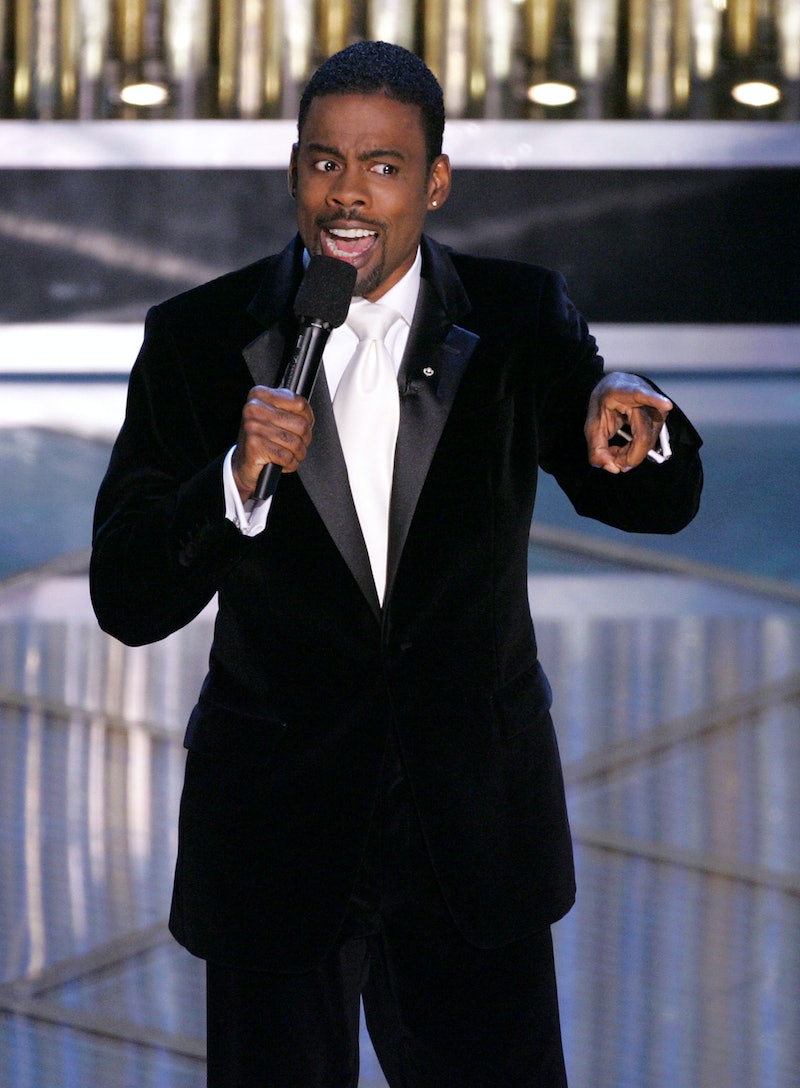 While people may have been excited to hear that Chris Rock is hosting the 2016 Oscars, some might be skeptical of how a comedian known for his incisive and expletive-filled standup could successfully adapt his sense of humor for a decidedly PG event. But Chris Rock has hosted the Oscars before — once, in 2005. And in a lot of ways, that first appearance actually coincides with a lot of things that are super relevant right now. Personally, I think Rock's first round as Academy Awards host should make fans of the comedian excited to see how he's changed in the last 11 years, and what he thinks about Hollywood having so many of the same issues over a decade later.

But back in 2005, the reaction to Rock's hosting wasn't unanimously positive. In her review of the awards, The New York Times' Caryn James wrote, "all those Oscar voters in the audience weren't amused when Mr. Rock started taking some mild jabs at the industry," and the stunned silence during his opening monologue, below, suggests they're correct. Tom Shales outright panned Rock's performance in the Washington Post, calling it "strangely lame and mean-spirited" and disparaging the jokes as, "unclear if this routine was some sort of commentary on racism or a gratuitous slap at Hollywood, but either option is hardly encouraging." While Rock brought the thoughtful edge that characterizes his comedy to the awards, he also brought the knowledge that some people might find him too confrontational: after all, he did open by saying "Welcome to the 77th and last Academy Awards!"

While this year people are frustratedly tweeting about Academy Award nominations primarily going to white people, in 2005 Rock happened to be hosting in a year when there were several black nominees — he called it "the Def Oscar Jam." Jamie Foxx went on to win for his performance in Ray, and Morgan Freeman won for Million Dollar Baby . Given that there are literally no people of color among the acting nominees this year, Rock will probably do at least a few minutes on Hollywood's "diversity" crisis.

Of course, not everything Rock talked about in 2005 had to do with race. He also did a few minutes on President Bush's reelection. And, given that 2016 is an election year, that's yet another way Rock could tribute his original Oscars performance — by mentioning politics. Rock riffing on Donald Trump would be hilarious. And he's talked about Presidents Bush and Obama, as well as politics in general, in his standup specials before to hysterical effect.

But probably the most notable aspect of Rock's first foray into hosting the Oscars was how defensively the Academy members in the room and critics talking about the ceremony reacted to Rock's riffs on Jude Law, who seemingly appeared in every movie of 2004 (Closer, A Series of Unfortunate Events, The Aviator, I Heart Huckabees, Sky Captain and the World of Tomorrow...). The NY Times quoted producer John Calley as chastising, "It's fun to make fun, but that was unrelieved." Sean Penn self-seriously called Law "one of our finest actors" when he went onstage as a way to fight back.

I'm curious what that breaking point will be for the 2016 Oscars. A joke about Jennifer Lawrence? A reference to Leonardo DiCaprio still going after his first Academy Award? Whatever the line, it seems that Rock's trademark sense of humor will cross it. The question then becomes — is Hollywood ready for Chris Rock to host the Oscars for the second time? We'll see on Feb. 28 if they've learned to laugh at themselves a little bit more since 2005.

More like this
'Doctor Who’s New Star Is Already Huge On TikTok
By Maxine Harrison
Yes, Billboard Queen Angelyne Really Ran For Governor Of California
By Brad Witter
Kim Kardashian Remembers Her Last Words To Death Row Victim Brandon Bernard
By Jake Viswanath
Cardi B Explains To David Letterman Why She Uses Her Star Power For Politics
By Jake Viswanath
Get Even More From Bustle — Sign Up For The Newsletter