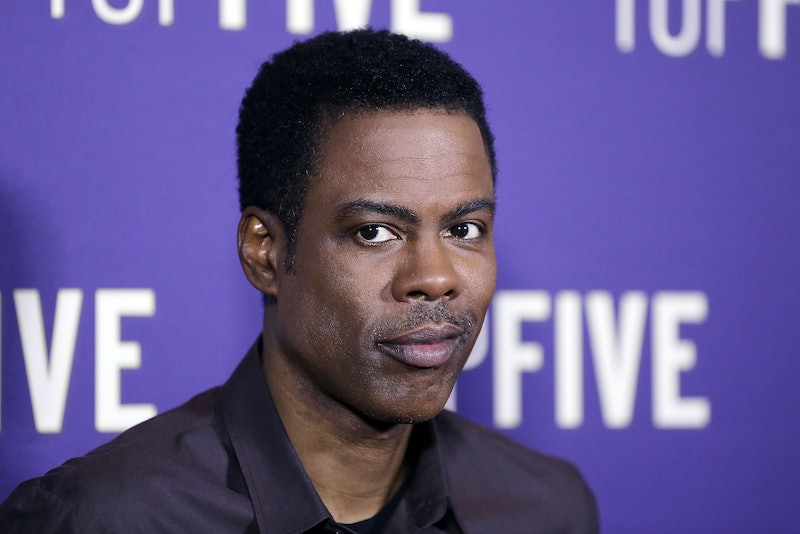 No matter what films take home golden statues at the Oscars on Sunday, or what celebrity emerges victorious on the red carpet, all eyes will be on one person in particular: host Chris Rock. In the wake of the #OscarsSoWhite movement and the controversy surrounding multiple celebrity opinions on the matter, many viewers' focus on Oscar night will not be on which person takes home what Oscar, but how the Academy will respond to the controversy surrounding the show. And while Rock may be a comedian hired to entertain, on Sunday night he will also, likely, confront the lack of diversity of the Oscar nominees head on, as he's done so in previous awards show appearances. And Rock's Oscars monologue could be the perfect place to do just that.

But just what will it include? Balancing the lighthearted and the serious is no easy task — what Rock needs to do at the Oscars is find a way to comment on lack of diversity as truthfully as possible without directly laying too much blame on the Academy, all while being entertaining and funny. Should be easy, right? Of course not, but lucky for him, I've got some ideas. Below are five things Rock's opening speech could potentially contain, from the lighthearted to the far more serious.

I have no doubt that Rock was already planning on making a few well-placed digs at the Academy and the lack of diversity of the Oscar nominees before they were even announced. The first joke of his Oscar hosting debut back in 2005 was about the racial makeup of the acting nominees, and even when he wasn't hosting, Rock has made jokes about the limited roles available to black actors as a presenter.

This year, however, the #OscarsSoWhite movement and lack of diversity in the films nominated by the Academy deserve more than just a few digs; ideally, they should take up a huge chunk of Rock's opening monologue. There is simply no way that Rock can ignore the overwhelming whiteness of this year's nominees during his speech — but the real challenge comes in how he will address it.

Rock needs to critique the Academy and Hollywood for their refusal to support and acknowledge efforts by minority filmmakers, and simply pointing to what the Oscars left out, like Straight Outta Compton or Creed, isn't enough to really make a poignant commentary. Personally, I hope Rock takes the time to address the unforgivable lack of representation in Hollywood and film in general. It's not enough for him to shine a spotlight on the movies that could have (and arguably should have) been nominated — he should to shine a light on what's not there at all. What movies aren't being made? What actors aren't getting roles?

Where Rock might get into trouble, though, is if he chooses to mention how some Academy members have responded to the #OscarsSoWhite controversy. Best Actress nominee Charlotte Rampling made waves when she complained about the movement, calling it "racist to whites," while many other (white) nominees have chosen to keep quiet on the issue entirely. Rampling's statements probably shouldn't find their way into Rock's opening monologue, though, as while Rock could single out one person, he's better off focusing on the larger implications of this Hollywood problem. After all, it's far bigger than just one person's very flawed reaction. It's best, then, if his #OscarsSoWhite commentary and jokes stay focused on the Hollywood system and films, not the actual actors.

How Rock relates Hollywood's diversity problem to the world outside Hollywood will also be crucial. After all, this is the last Oscars with President Barack Obama in office, and Donald Trump, a man known for making wildly racist comments on the campaign trail, is the Republican front-runner. Political jokes are always welcome from the (largely liberal) Hollywood crowd, but this year there is an opportunity to really show how the industry's diversity issues reflect the current political climate. And, if Rock happens to throw in a joke or two at Trump's expense, you won't find me complaining.

So, to recap, Rock's opening monologue has to be funny and entertaining, it has to comment on Hollywood's lack of diversity smartly, not cruelly, and it should probably throw in a couple jokes about the presidential race. Did you think that was it? And that's not even going into one other issue that should — and could — be mentioned during Rock's opening monologue: Black Lives Matter. If there's one thing that #OscarsSoWhite has made clear, it's that Hollywood doesn't exist in a vacuum, and it's evident that the movement's reach has been impacted by the Black Lives Matter movement. Though perhaps not absolutely necessary, some sort of show of support for the movement or acknowledgment by Rock would be completely appropriate, if done in the right way.

At the end of the day, Rock's opening monologue at the Oscars will just be 10 or so minutes of entertainment. But that brief time on stage holds a lot of power. Yes, audiences expect a comedian to make them laugh, but they also expect him or her to expose some important truths. Whatever topics Rock chooses to expose in his speech, it will have an impact, and millions of viewers will be watching.