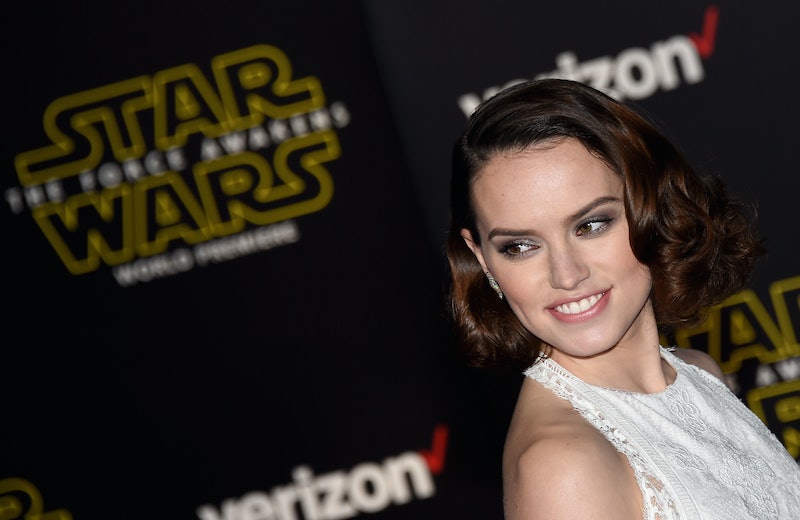 At first glance, the latest character played by The Force Awakens star Daisy Ridley doesn't seem anything like Rey, the Force-sensitive scavenger she plays in the newest Star Wars film. Taeko is 27, works in an office, and lives in Tokyo — not to mention the fact that she's animated. Yup, It's Ridley's voice talents that are on display in the Feb. 26 English language release of the 1991 Japanese film Only Yesterday. The actress plays the lead character in the drama from revered animation house Studio Ghibli, a young woman who reflects on a difficult childhood while she struggles to define her future. Sounds like a far cry from a future Jedi Knight, but Taeko and Rey are more alike than you might initially think.

First of all, both Taeko and Rey are at an emotional crossroads in their lives. In Only Yesterday, Ridley's character jumps at the opportunity to get out of the city and into the country with a family acquaintance. She uses her memories to unearth those dreams and goals that had been buried by adulthood, and is reminded that she still has choice. When the audience meets Rey in The Force Awakens, the young woman is completely stalled, living out identical days and waiting for rescue from someone who is never coming. The arrival of BB-8 and then Finn on Jakku blow her world open, and she comes to realize that there may be more adventure and family in her life than she'd ever thought possible. But she can only advance if she's willing to let go.

In this official interview clip, Ridley talks about the universality of Taeko's story, which likely helped make Only Yesterday the highest grossing movie of the year in its original Japanese release. The movie, Ridley says, deals with "How do you make your dreams come true and stuff like that. And I guess, you live, you go day to day, and you try new things and you meet new people and eventually, you'll kind of end up where you should be. I think anyone around the world — girl boy, young, old — goes through kind of transitional periods of self-discovery, and because of that, this film will speak to everyone."

Close your eyes, and Ridley could be talking about Rey embracing her Jedi destiny. In some universes, self-discovery comes through being handed a lightsaber. In others, it comes through a break-up, a job change, or making a new, close friend.

What's cool about films like Only Yesterday is that they use the medium of animation to tell stories that audiences don't usually expect from that form. There are no superheroes or talking dragons in this movie, and it's not aimed solely towards children. Animation isn't inherently light or juvenile, and neither is science fiction/fantasy. Both genres can tell coming-of-age stories that provoke moments of identification in audience members across the board, even though popular opinion expects them to see differences first.

So, though Taeko and Rey live literal galaxies apart, these Daisy Ridley characters are soul sisters in their introspection and questioning of the world around them.