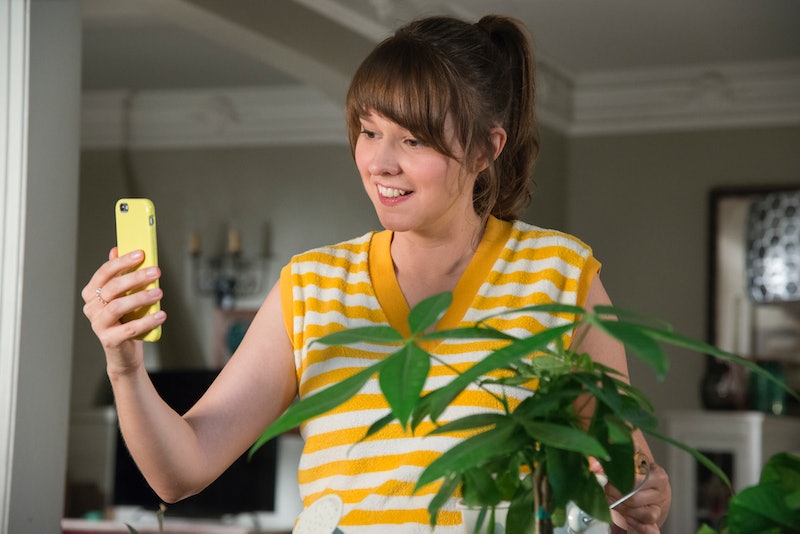 There are many pop culture references on the new Netflix series Love from Judd Apatow, Paul Rust, and Lesley Arfin. One of my personal favorites comes from Mickey's roommate and one of the true breakout performers on the show, Claudia O'Doherty. How great is Bertie's scene about The Holiday on Love ?

The scene occurs in Episode 9, and if you haven't gotten there yet, you should know it's one of the lighter moments in the episode — but no spoilers! Bertie's the best on Love without a doubt, isn't she? She serves as a great foil to the other characters and I really enjoyed her relationship with Mickey. It's flawed, realistic, and since they're roommates I'm not distracted wondering why they would be friends in the first place. This scene, however, just takes the cake. Gertie's love of The Holiday, a seriously under-rated Christmas-themed romantic comedy, is totally charming and ends up playing into the episode in unexpected ways.

First of all, it's always great to see people summarize movies that they love. It's even funnier because Bertie's enthusiastic monologue is completely un-called for during someone else's tour. She misunderstood the guide and though The Holiday was filmed on that lot, asked where it was filmed, and the started describing the movie for clarification.

When the tour guide tries to shut her down, Bertie quickly takes over the group to continue explaining the plot of The Holiday. "Cameron rents an English cottage to escape her hectic life as a publicist and she ends up in the arms of Kate's brother, played with rugged charm by Jude Law. Jack Black stars as Kate Winslet's love interest in a surprising performance as a leading man. And Kate Winslet won a 2007 Teen Choice Award."

Bertie's so enthusiastic that the first time I watched this scene I didn't notice that she's wrong about a key detail. Cameron Diaz does not play a publicist. She produces movie trailers, which not only explains her lush Hollywood lifestyle, but serves as a narrative device in the film. That said, I love Bertie, so I'll allow it. Later on, Bertie tops off her depressing day by visiting the gift shop and discovering that they don't have any "romantic comedy-themed merchandise, preferably something with Winslet and Diaz." Who doesn't want to be reminded that "happiness can find you when you least expect it," as she explains to the clerk? This show deconstructs a lot of romantic comedy tropes, but you can't deny that The Holiday is kind of perfect. Slight spoiler alert, I lied — Bertie does end up finding happiness at the end of the episode, when she least expects it! That's some good television right there.