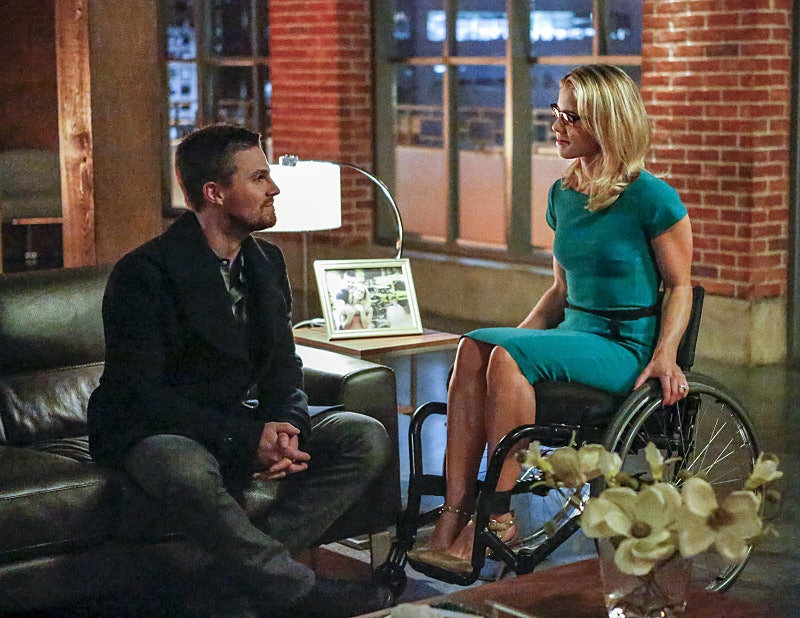 We knew it would only be a matter of time before Felicity learned about Oliver's son, William, on Arrow , but that didn't make the shocking realization any less heartbreaking to witness during Wednesday night's episode "Taken." Of course, we already figured this news wasn't going to go over well, considering the major fallout that happened between Oliver and Felicity when she found out about it the first time — before Barry went back in time to change things. But no two instances are ever the same, so I was curious to see how she would deal with it this time around. And the answer is... still not that great. So what does this mean for Olicity's future? Will Oliver and Felicity still get married in light of all this? I wouldn't be all the worried about it just yet.

Granted, if you had asked me that question two days ago, I probably would've burst out int weepy hysterics, given the lack of a wedding ring that appears to be on Felicity's finger in the Arrow flash forward. However, Arrow producer Marc Guggenheim recently posted a photo from an upcoming episode on Twitter, which shows Oliver and Felicity in unmistakable wedding attire. In fact, they are quite literally at the altar. And before you start thinking up conspiracy theories about dreams, hallucinations, and alternate realities — all of which are entirely possible on this show — Guggenheim captioned the image with a promise to fans, assuring them that the image is legit without any fake-out strings attached.

So unless he's outright lying to us, this leaves me to infer that the wedding will proceed as planned, even in light of Oliver's big secret. But that doesn't mean Felicity isn't still hurt or resentful to Oliver for keeping her in the dark, especially after all they've been through. Whether we want to believe it or not, this lie will forever change their relationship and could even be partially responsible for Olicity's potential undoing. Not because Oliver has a son, mind you, but rather because he failed to tell her about it. (Oliver, you have failed this relationship!)

So while they may get married and try to move past this as best they can, it will forever be a dark cloud hovering over their marriage. I think Samantha vouching for Oliver certainly helped matters, but at the same time, there were people like Barry, Thea, and Malcolm who knew before she did, which also didn't settle well. And I think everyone's heart pretty much ripped in two when she took off her engagement ring and quite literally walked out on Oliver at the end of the episode. (Yay for her walking again though!)

It's not an ideal situation, but I wouldn't call it a complete loss. It certainly felt a little better than the way things had originally gone down when she found out before. If anything, their relationship is just on a time out and the wedding will commence at some point when the show returns. However, if that flash forward is any indicator, their wedded bliss may be over before it even really had a chance to start. Now, if you'll excuse me, I have to go send the Arrow writers my therapy bill.