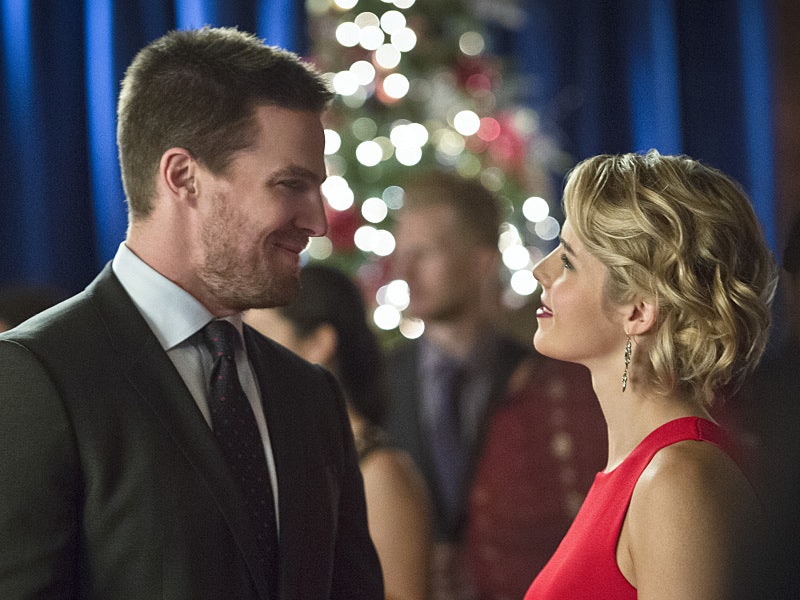 Everyone gave a collective sigh of relief when it was revealed that Felicity isn't the one who dies in the Arrow flash forward. (Thank you, writers, for giving me this small semblance of peace.) However, that doesn't mean her future won't still have a slightly grim outcome. Because while that glimpse into the future may have guaranteed her physical safety, it seems as though she may still suffer on an emotional level, particularly in regards to her relationship with Oliver. As a matter of fact, I think the flash forward proved that Oliver and Felicity are no longer engaged at that point in time. What makes me say that, you may ask? Oh, I don't know — how about the fact that she wasn't wearing her engagement ring during their little trip to the cemetery.

Though the scene was over with so fast that if you blinked you may have missed it, many fans couldn't help but notice Felicity's bare ring finger during their rather stiff conversation once Oliver got in the limo. Things are clearly strained between the two of them, though it's unclear what actually happened to make this come to pass. Was it just the stress of trying to capture Damien Darhk? Does Felicity resent Oliver for whoever is in that grave? Or does this maybe have something to do with the secret Oliver is keeping from Felicity about his son? Right now it's impossible to say, but one thing's for sure — this is not a good indication for Olicity's future.

It's a cruel parallel to give fans, considering the last time we saw them in a limo they were busy celebrating their engagement (right before Darhk's men attacked the vehicle, which led to Felicity's paralysis). And now to see them in such a similar surrounding but so completely distant from one another — both physically and emotionally — it's almost too painful to bear. This duo has been through so much together and have come so far in their relationship, it's devastating to think that they won't get a happily ever after.

That being said, the optimist in me is always hoping that the situation may not be as dire as it seems. Maybe she lost the ring or has just dropped it off at the cleaners in preparation for the big day. (Did I mention that "naive" is my middle name?) OK, so it's probably none of those scenarios, but even if their romantic future is in jeopardy at that time, who's to say it will necessarily stay that way? This show loves to toy with our emotions just because it can. And when two people love and care about each other like they do, then there's always hope that their love story can be salvaged.

So no matter how terrible things look now, don't lose hope just yet. These two characters are Arrow's OTP, for better or for worse, which means nothing in the world can keep them apart for long.