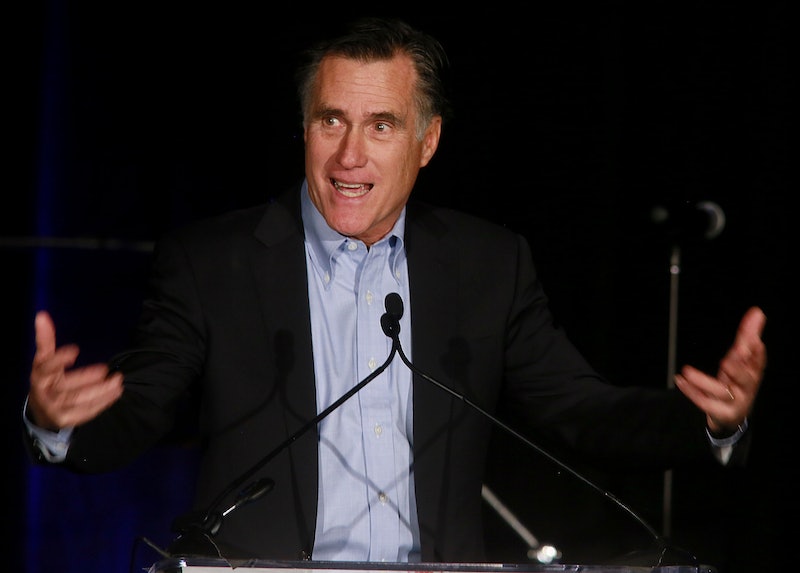 In the midst of Mitt Romney's 2012 presidential campaign, the former Massachusetts governor got a lot of flak for not making the details of his tax returns public. Democratic critics piled on the suspicion that Romney was hiding something in those filings, and called on the presidential candidate to publish every year's return. On Wednesday, Romney turned those tables and got on the current GOP candidates' backs, saying that they should release their own tax returns for public scrutiny. He went so far as to say that frontrunner Donald Trump's taxes likely contain some jaw-dropping information. So what "bombshell" might lie in Donald Trump's taxes? Romney has a few suggestions.

During an interview with FOX News' Neil Cavuto, Romney pointed out that with "only" nine months to go before the general election, Americans haven't had the chance to check out the tax documents of any of the three leading candidates in the Republican Party. But the former governor didn't care so much about Cruz and Rubio's returns as he did Trump's.

Well, I think there's something there. Either he's not anywhere near as wealthy as he says he is or he hasn't been paying the kind of taxes we would expect him to pay, or perhaps he hasn't been giving money to the vets or to the disabled like he's been telling us he's been doing.

Trump has already denied that there's any big news when it comes to his government dues. "There is no bombshell at all, other than I pay a lot of tax and the government wastes the money," Trump told CNN's Anderson Cooper in an interview soon after. Trump also straight-up called Romney a fool for insinuating that there's something Americans should know about his moolah.

But according to Romney, having access to those filings is really more of an understood right of the American people:

Look, people have a right to know if there's a problem in those taxes before they decide.

Hence the call for the billionaire to pull out his scanner and upload those returns as files for all to see. Or maybe Mitt's just been super bitter ever since those relentless critics made him look bad for only releasing two years' worth of tax returns. And maybe such bitterness is preventing Romney from seeing the total irony of him saying it's the voters' right to see a candidate's taxes.