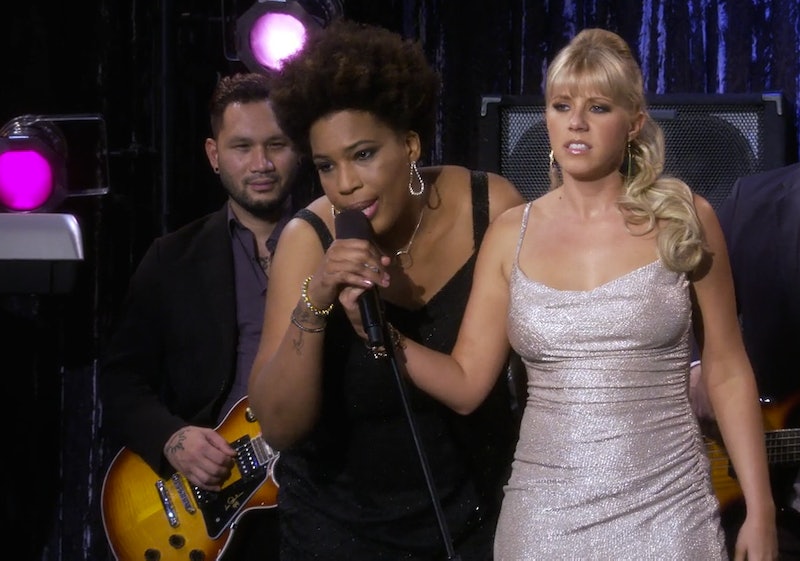 I couldn't help but get giddy when I put on the first episode of Fuller House on Netflix and the original theme song from Full House came on. However, as the spinoff series is embracing the old, they are also mixing it with the new, which they highlighted when Macy Gray performed on Fuller House. While the "I Try" singer didn't visit the Tanner-Fuller household (D.J.'s married last name is conveniently "Fuller"), she did make a cameo at the club Euphoria that D.J., Stephanie, and Kimmy were having their girls night out at. And, if you were confused by her appearance, you weren't alone since as Gray said herself, "What am I doing here? I won a Grammy!"

In the third episode of the series that is brimming with nostalgia and old references to the good times on Full House, Kimmy and Stephanie convince D.J. to go out for a night of fun with the "She-Wolf Pack." (Kimmy is absolutely the Zach Galifianakis of this group if The Hangover references must be made.) At the club, Stephanie sees her old buddy Gray, whom the middle sister had met in Bangkok at party that she had been DJing at — as DJ Tanner — and at this point, I must say that the older, revamped Stephanie is by far my favorite character.

Although Gray's performance on Fuller House could be described as mmm ... let's go with "pretty casual," I still thoroughly enjoyed her one-liners. Even if I couldn't tell if Gray was damning her agent for allowing her to do this or just going with the flow, she did get a chance to plug her album The Way , which you could apparently buy from the trunk of her car. And the best part of her appearance — besides continually calling the guests at the club "sexy people" — was when Stephanie actress Jodie Sweetin and Gray sang a rendition of Dirty Dancing's "(I've Had) The Time of My Life." (Can I also please get a copy of this from Gray's trunk?)

As Kimmy and D.J. recreated Jennifer Grey and Patrick Swayze's moves from the '80s movie (for the record, Gray is not related to Grey with an "e," though the singer did say she was "crazy for Swayze"), you still might have been wondering why the hell Gray would be on Fuller House. To help ease the randomness of it all, there is a connection that runs through the entire club storyline of the episode "Funner House," and that is Dancing with the Stars. D.J. actress Candace Cameron Bure and Gray have both been on the ABC ballroom show (and so has Grey for that matter) as amateurs. And professional dancer brothers Maksim and Val Chmerkovskiy from DWTS also made an appearance in the episode. (They were super pumped to be brothers dancing with sisters!) I understand that the glossy corniness of the whole situation during "Euphoria's Legendary Nightly Dance-Off" may have been too much for some viewers, but I was thriving on the shamelessness of it all. And I left wondering where I could find a club like Euphoria to go hang out in — Gray or no Gray.