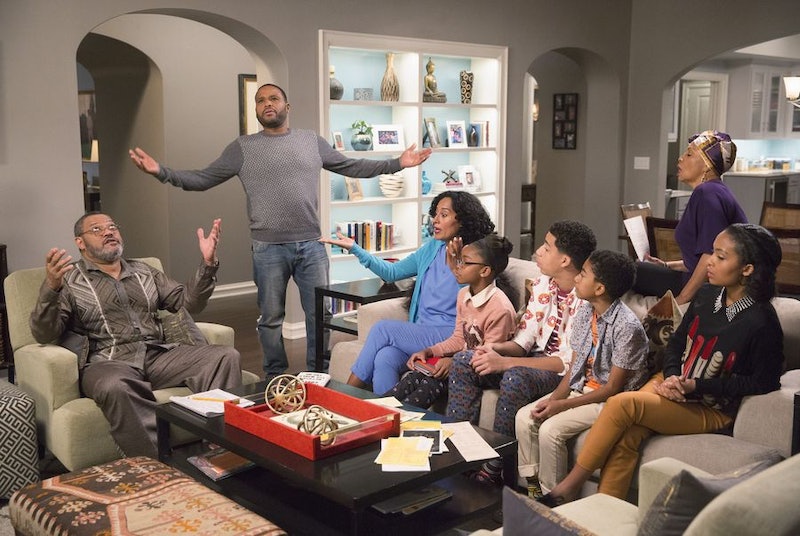 It's not unheard of for sitcoms to take a break from being funny to deal with something more serious, but it's rare that they do a good job with it. Often, those very special episodes of family comedies like Saved By The Bell, Full House, Family Matters or Fresh Prince Of Bel-Air that deal with drugs, alcohol, or gun violence feel heavy-handed, preachy, or outright clumsy. They end just a little too perfectly, with everything tied up in a big bow, as if such complicated issues could be solved in 30 minutes or less. Knowing this, it was easy to be skeptical or even cynical about the ABC sitcom black-ish taking on the issue of police brutality in its latest episode. But black-ish managed to do the unthinkable. They made us see the gray area in an issue many think is black and white. Even more impressive, they managed to find some hope and humor in it — in 30 minutes or less.

It's easy to feel hopeless when you're being bombarded by stories of police brutality 24 hours a day, seven days a week, on cable news and social media. As three generations of the Johnson family watch CNN for news on a settlement over the most recent police brutality case, the eldest daughter starts questioning which one this is. She, not unlike the rest of her family, has trouble telling them a part, rattling off cities like Chicago, Charleston, New York to try and remember what exactly happened here. The particular one they're talking about — a guy selling DVDs who was tasered 37 times — is not real, but it's not hard to imagine it could be.

But, as the episode, which is about how, as adults, we try to give our children hope about the issue of police brutality when we're not so sure how hopeful we feel about it ourselves, makes clear, all of these incidences are a little more nuanced than we often let them be. Something the eldest, Ta-Nehisi Coates-reading son states to his family. "Police definitely have a place in society," he tells his dad. "But, with almost 1,000 police-related fatalities and billions of dollars in misconduct settlements, there might be some issues." These issues make the situation hard to talk about without things getting heated, and black-ish allows for this passionate argument to be unspooled over the course of its half hour. It's something they've done before, and done well, tackling issues like swimming stereotypes, the N-word, and religion.

They don't shy away from these socially conscious topics, but have helped the trope of the "very special episode" evolve. The Atlantic talked about this TV evolution from the early Norman Lear years of these kinds of episodes, which helped foster dialogue within a family about important topics, like sex or drugs, that parents may have been afraid to broach with their kids. These episodes served a purpose, but soon became standardized and lost their magic. They weren't made to inform. They were marketing ploys, quotas they had to hit, and too often a way to get ratings.

Shows today can't get away with that. The audience is just a bit too a smart and cynical to fall for empty melodrama. It's the reason why many shows have likely moved away from these issue-based plotlines: they just don't seem to work. But, in actuality, it's not that these episodes are antiquated. It's the way they're done that is passé. black-ish proved this by taking an issue close to their heart and treating it with the care it deserves. Nothing about this episode seemed forced because it wasn't. It was just honest.

The issue of police brutality and how we talk to our children about it is the story they're focused on telling, and they do it in several different ways. They show parents, Rainbow as the devil's advocate who's still holding on to hope while Dre is all but ready to give up. They show grandparents as being tired of the same thing happening and expecting different results. They show children and grandchildren, trying to see both sides of the debate by understanding the details. The laughs always come second, or, as creator Kenya Barris told Entertainment Weekly, “We really tried to make sure we gave ourselves enough balance to still get the point across, but, at the same time, give people an entry point where they felt like they could get into it and not be bummed out the whole time.”

With this episode, Barris lets us know it's okay to laugh, but we can't laugh these issues away. Police brutality is never the joke in this episode, because that will never be funny, but the way we react to it can be. And maybe, if we can find this humor in something that seems so dark, we can try and find common ground.

It's clear from this episode that the writers know police brutality is a topic that won't be solved at the end of an episode. They never wrapped it up in nice, neat bow. Instead, they tried to tackle the topic in a thoughtful, well-informed, and delicate way. And, in the end, they crafted an episode like this, an episode which can do a lot of good when it comes to starting a conversation. A new conversation, one that tries to understand both sides of this complex issue. In the end, the Johnsons aren't the only ones talking about police brutality, and it's really that which makes this episode a very special one.