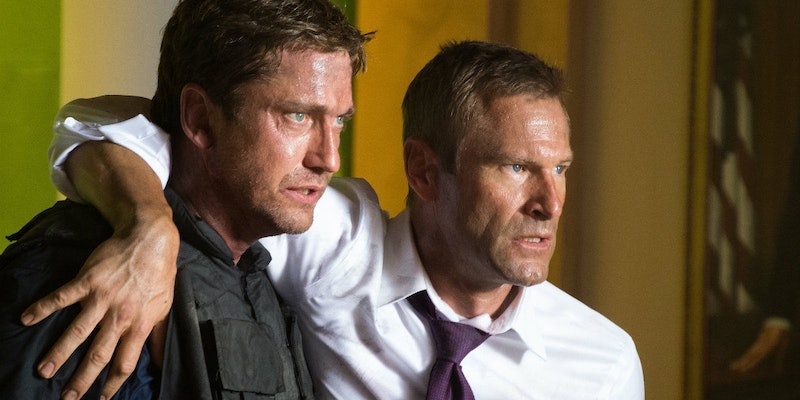 If you're a fan of manliest-man Gerard Butler, you might know London Has Fallen as the movie that stole him from last year's Point Break remake. Like its predecessor, 2013's Olympus Has Fallen, this flick features the Scottish actor as Secret Service Agent Mike Banning, an old-school action hero who runs through explosions with plenty one-liners and saves the President of the United States (Aaron Eckhart) from a mysterious terrorist plot. With its flag-waving formula of ass-kicking, plus the added bonus of Morgan Freeman's voice, it's easy to predict that London Has Fallen will have a sequel.

Just as it came after the success of Olympus Has Fallen, London is sure to secure a follow-up of its own. Threequels are where it's at these days, and like this current film, a potential third installment will undoubtedly feature limousines, hard liquors of various proofs, and guns as far as the eye can see. And, after muscling his way through the United States and the United Kingdom, Butler may as well continue his grand tradition of fightin' around the world and head off to another empire. Perhaps Russia is in the cards? Here's hoping Butler gets to team up with Pussy Riot and make the greatest feminist action movie of our time, filled with dynamite action scenes and lots of punk rock.

Between his forays in climate change with this year's Geostorm and 2018's How to Train Your Dragon 3, Butler has a little bit of time to make this cinematic magic happen and take his career to the next level. A third movie might also make the topics discussed in the Fallen films resonate even stronger with terrorist attacks in the news all too frequently and many Americans terrified of being killed in such a manner, the public's anxieties can get reflected on-screen. So while there's no definitive answer just yet that a third film is on the way, it's unlikely that if it happens, the public won't be happy to see someone fight the bad guys and save the world on-screen one more time.