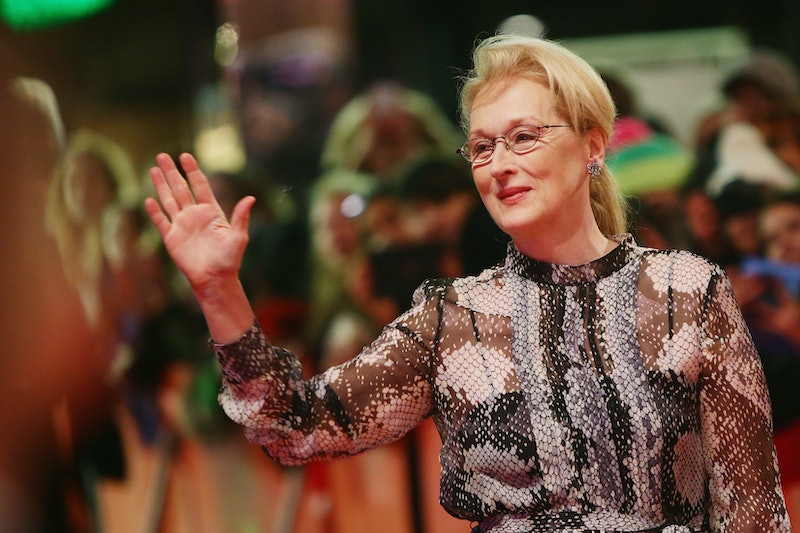 Meryl Streep knows what you think she said at the Berlin Film Festival. How you think she misspoke in a quote about diversity that defended the festival's all-white jury while also seemingly claiming we're just all the same. Specifically, you read that Streep said "we're all Africans, really." But, what you read on the Internet isn't exactly true, and Streep is setting the record straight from Berlin in an essay on the Huffington Post. And, sure, this essay could be seen as Streep trying to clear her own name, but that would be missing the point. It's really about the things we miss when we focus too much on soundbites that don't tell the entire story.

Streep explains that this "we're all Africans" quote was a part of a much longer answer to a very different question. "Contrary to distorted reporting, no one at that press conference addressed a question to me about the racial makeup of the jury," Streep wrote. "I did not 'defend' the 'all-white jury,' nor would I, if I had been asked to do so." Streep did say "we're all Africans," she doesn't deny this, but she makes it clear that it was her answer to a much longer question from an Egyptian reporter about her understanding of Arab films and culture. Streep asks for you to look at her answer in that context.

"I don't know very much about, honestly, the Middle East, ...and yet I've played a lot of different people from a lot of different cultures. And the thing I notice is that we're all — I mean there is a core of humanity that travels right through every culture, and after all, we're all from Africa originally, you know? We're all Berliners, we're all Africans, really."

There are some people that are still going to be offended or upset by that answer, which seems to boil down the world's cultures into being one in the same. And that's OK. But Streep does deserve her answer to be repeated in the proper context. Some outlets did update their original stories about Streep's quote, like Mashable and Complex. Flavorwire took a different approach, writing a new story with the headline "Surprise: Meryl Streep’s (Still Stupid) Quote on Diversity Taken Out of Context," while Jezebel asked "Has Meryl Streep Been Redeemed by This Correction On Her 'We're All Africans' Quote?"

But many others didn't. Why would they? More people are going to click on the "Streep gets diversity completely wrong" story than one about the more nuanced reality of the quote. It confirms people's suspicions about Hollywood's diversity problem, and, for anyone who would like to take Streep down a notch, this story allows them to do that too. What this story doesn't do, though, is address the larger issue, which is diversity in Hollywood. Or, in this case, the Berlin Film Festival.

This controversy was likely the only thing you heard about the fest, which is a shame, as Streep notes in her essay, since actual films about actual important things were being screened there. Films from countries that don't often get noticed in America, such as the Tunisian film Hedi, about a son who is stuck between his future and the present, which Streep says "brings the big issues of irreconcilable differences tenderly down to a human level." The top prize at the festival went to Fire At the Sea, a film which looks at refugees traveling from the Italian island of Lampedusa to Europe, where they find people willing to help them. These films don't negate the fact that the Berlin Film Festival didn't have any people of color on their panel, but it is something that was worth noting amidst the stories of Streep's faux pas.

The thing is, the Streep story, and likely her essay, aren't doing anything to push the diversity conversation forward. They're just grabby headlines that get us clicking and commenting until another celebrity says something we consider to be dumb. Then, we'll continue the cycle of bad-mouthing them for not being better. Streep may or may not totally understand why her quote will still likely ruffle feathers, but she's not the only one who doesn't understand.

Calling her out on social media isn't going to make her, or anyone else, understand the complexities of this issue. And this issue is so complex that we shouldn't shut people out for saying the wrong thing. Understanding isn't something the media and social media always allow for, but that doesn't mean we shouldn't try. By questioning the things we see or hear, we push our media to be better and to give us the complete story. This way, we don't pre-judge, but instead have the ability to make well-informed opinions. You have the choice to agree or disagree with Streep's explanation of her quote, but having the facts to form that opinion shouldn't be a choice. It should be required.

More like this
Harry Styles Called For "Backlash" In Powerful Statement On Abortion Rights
By El Hunt
Laura Dern Said “Cultural Awareness” Made Her Rethink This 'Jurassic Park' Fact
By Grace Wehniainen
Colin Firth Revealed His Favourite Mr. Darcy (& No, It's Not Himself)
By Sophie McEvoy
Watch The Dramatic First Trailer For Netflix's Jennifer Lopez Documentary
By Alyssa Lapid
Get Even More From Bustle — Sign Up For The Newsletter