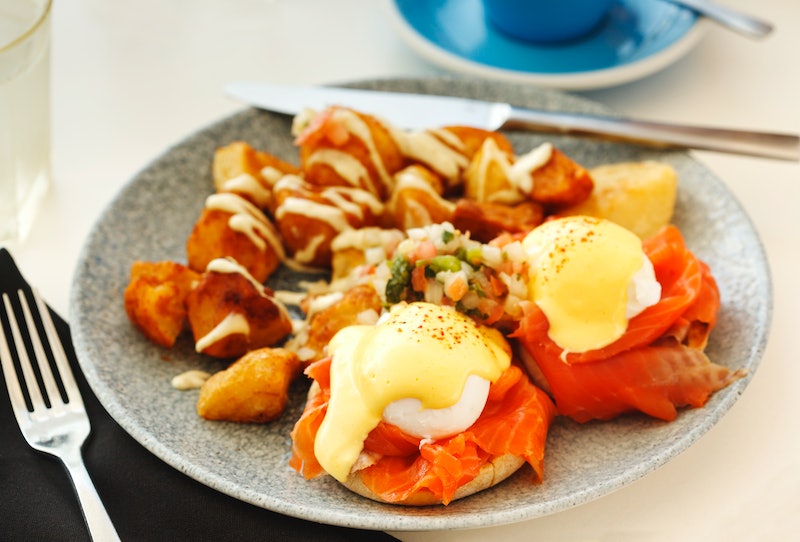 Brunch, the boozy spawn of breakfast and lunch, can be an issue more polarizing than party lines during election season. And though the history of brunch is not very long, the meal has become something of an American institution. The late morning nosh has a large body of fanatical supporters who see it as an opportunity to socialize with friends while easing last-night’s hangover with some strong coffee and hair of the dog. While no one is denying its high points (ahem, mimosas), there are also plenty of brunch critics who balk at waiting over an hour for a table on a precious weekend morning. These brunch haters see it as a punishment designed by early bird friends who like squeezing their oversized baby carriages between cramped tables and talking about their 10ks. The hysteria of brunch has ratcheted up the price and paying $18 for a brunch entree can seem pretty exorbitant if that Western omelette isn’t topped with Osetra caviar.

But whether you are a weekend warrior who loves your french toast, or see it as a waste of time and disposable cash, America is responsible for popularizing the concept. Though we can thank our neighbors from across the pond for creating the lovely portmanteau word. According to the Oxford English Dictionary, "Brunch" was originally university slang from late 19th century.

An article by Guy Beringer published in an 1895 edition of Hunter’s Weekly was the first to make a case for the meal. In Beringer’s piece, titled “Brunch: A Plea,” he proposed doing away with England’s traditional heavy early Sunday dinner, usually taking place after church. Instead, he wished to replace it with a meal starting around noon, and consisting of lighter foods, coffee, and even alcoholic beverages. He believed it would promote more sociability as well as allow people to rage harder on Saturday night, “By eliminating the need to get up early on Sunday, brunch would make life brighter for Saturday night carousers. It would promote human happiness in other ways as well.”

Over a century later, his words still ring true: "It is talk-compelling. It puts you in a good temper, it makes you satisfied with yourself and your fellow beings, it sweeps away the worries and cobwebs of the week." It seems even back then people needed to blow off serious steam on the weekends.

Brunch was first mentioned in print in the US the year after, in an 1896 edition of the New Oxford Item, reading, "The latest "fad" is to issue invitations for a meal called 'brunch.' This means a repast at 11 o'clock a.m., which is supposed to be the midday time between breakfast and lunch." The column titled "The Newest Thing In Lunches" credited the newly passed Raines law, which prohibited sale of alcohol on Sundays — except by hotels accompanying a meal, with birthing the brunch concept. Brunch in New York thus became one of the shortcuts around the blue laws (which is pretty baller).

Even the progenitors of today's classic brunch bellinis and bloody mary's were thanks to Prohibition. During the 1920s, adding juice to cocktails became popular as a technique for masking the alcohol, and the fact that it wasn't aged as long. These pleasant fruity drinks made it seem more socially acceptable after World War II to drink during the day time.

The meal grew in popularity in the 1930s, when during transcontinental train trips it was customary to transfer in Chicago and enjoy a glamorous meal in the late morning/early afternoon. A 1983 New York Times article describes the early popularity of brunch, "Evan Jones, author of American Food: The Gastronomic Story, says he first became aware of brunch at the famous Pump Room in Chicago's Ambassador Hotel in 1933... Mr. Jones says it was as much a scene as lunch at the Four Seasons is today."

Brunch, which had become a trend of the wealthy and upper-class, exploded in Chicago thanks to the city's affluence during the Gilded age and onwards. The Washington Post says that the humble meal is still a marker of prosperity today. Farha Ternikar, the author of Brunch: A History, affirmed in The Washington Post, "Brunch continues to grow anywhere there is disposable income or time." Perhaps, this is one of the reasons our pancakes are so expensive?

Has brunch reached a saturation point? Probably. Will I still go out for mimosas on Sunday morning if given the opportunity? Heck yeah.