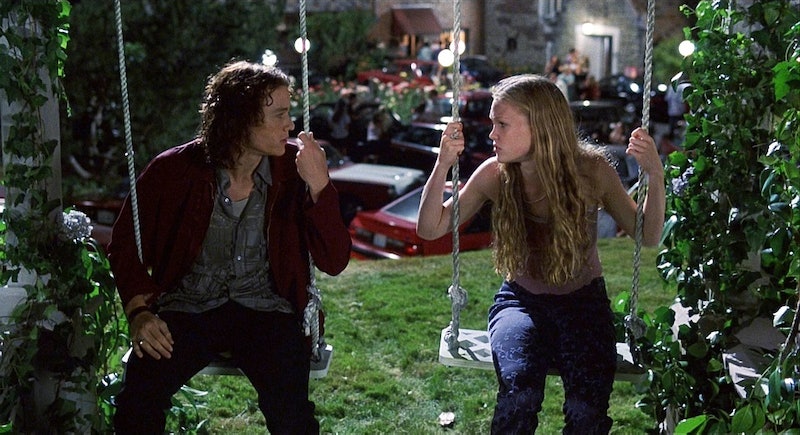 Between their huge houses, picturesque relationships, and perfectly matching plaid skirt/platform boot combos, some movie characters from the 1990s seemed to have it all. Some of them were completely awful human beings — for example, Kathryn Merteuil of Cruel Intentions — but nonetheless had things that every '90s girl wanted. Others didn't have it quite so easy in terms of life situation, but made up for it with enviable intelligence (like Clarice Starling in Silence of the Lambs) or remarkable badassery (like Mathilda in Leon the Professional). Even more enviable '90s movie characters had neither amazing material possessions nor personal qualities, but did have two hours' worth of onscreen romance with a hunky guy in whitewashed jeans. And sometimes that was enough to make a '90s girl turn green with jealousy.

There were also some male characters from '90s movies whose shoes I'd be more than glad to step into. Richie Rich? That kid had it made. Bodhi in Point Break got to surf and rob banks. And Lestat from Interview with the Vampire was the only supernatural villain who could rock a blonde ponytail. So here are some movie characters from the 1990s who, for one reason or another, are still totally enviable in 2016.

1. Melanie And Allyson, Passport To Paris

Mary-Kate and Ashley played twins whose parents paid for them to go stay with their esteemed ambassador grandfather at his mansion in Paris. The girls proceeded to meet two charming French boys who drove them around the City of Lights on their mopeds. Yes, please.

I'm pretty sure that literally every girl in the '90s wanted to be Rose. She had the love affair of a lifetime with Jack Dawson and then survived the sinking of the Titanic to live a long, full life until she passed away peacefully in her bed at the age of 101.

Cher was the all-time enviable Beverly Hills girl, and she got to kiss a '90s Paul Rudd — even if it was a little weird that he was supposed to be her step brother.

Macaulay Culkin's character had a freakin' awesome house (which is probably why he took such extreme measure to protect it). And then he got to lounge around in a suite in the Plaza in Home Alone 2. So much jealousy.

Yes, Princess Jasmine was an oppressed female character. But she also had a pet tiger and got to go on a flying carpet, so...

Who wouldn't want to live in space? Especially when you have tight friends and even tighter fashion...

John Gage was a shrewd, dishonest man who was morally bankrupt despite of all his physical riches. But, like, we're talking about a lot of riches. Plus, it'd be pretty awesome to be Robert Redford for a day.

8. Annie And Hallie, The Parent Trap

Imagine that you have a dad who's a vineyard owner in California, a mom who's a fashion designer in London, and a newly discovered twin. Nice.

She was brilliant, kindhearted, and rocked a collared shirt and khakis like nobody's business.

It's a pretty drastic upgrade to go from being an escort to being the love interest of a dashing businessman played by Richard Gere.

11. Duncan, My Date With The President's Daughter

Who wouldn't want to go on a date with the child of the POTUS? Although, this movie admittedly had the major flaw that Duncan didn't recognize Hallie as the offspring of the leader of the free world when he met her.

Not only did Kat get to date Heath Ledger, but she also had one of the best angsty teenage monologues of all time.

She was pretty, she was cool, and she dominated her school. Don't pretend you weren't jealous of Kirsten Dunst's character.

So many characters, so many opportunities to be envious. But it's worth noting that you have things that none of these characters did. Like an iPhone, and Chobani, and Downton Abbey. So even though the lives of many '90s movies characters were pretty bitchin', so is yours.