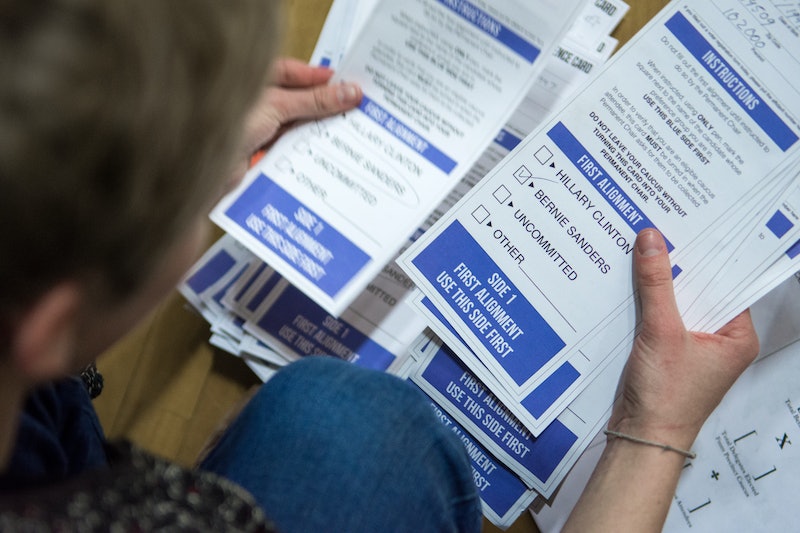 The Washington Post proclaimed Hillary Clinton's comfortable win in South Carolina was a "disastrous" night for her challenger. CBS News summarized Saturday's primary with just one question: "Can he ever catch up?" With headlines like these, it's easy to forget that the First Four states to vote in the primary command a meager 4 percent of the delegates a presidential candidate needs to lock down the Democratic nomination. Mathematically speaking, the presidential primary race has barely begun. Things are set to kick into high gear next month, beginning with 11 states and one American territory casting votes simultaneously in a flurry of electoral activity known as Super Tuesday. Sensationalism aside, what are Bernie Sanders' Super Tuesday chances?

Like the feast that follows the fast, Super Tuesday will dish out a hearty helping of delegates in the Democratic race. A total of 865 delegates will be decided based on Tuesday's votes with an additional 150 unpledged superdelegates also at stake. Although the day by no means represents an end to the primary race, it will provide a better picture of the nomination contest than the 156 delegates so far awarded have. The number of delegates up for grabs on Super Tuesday equal a little more than 36 percent of the 2,383 delegates a candidate needs to clinch the party's nomination at the Democratic National Convention.

The main Super Tuesday concern for Sanders' campaign isn't racking up more states than his rival. Clinton's established lead among black voters is expected to propel her to victory in the six Southern states participating in primaries Tuesday, leaving Sanders with five states (three of which have the senator leading in polls) where he could potentially pull wins. Instead, his campaign will likely focus on keeping Clinton from widening her delegate lead to the point of no return by shooting for narrow margins of defeat in Alabama, Arkansas, Georgia, Tennessee, Texas, and Virginia. The six states allocate 66 percent of Super Tuesday delegates, according to FiveThirtyEight.

That's not to say Super Tuesday looks great (or even particularly good) for Sanders. The senator's Super Tuesday performance has the potential to reveal some serious signs of distress in the Sanders campaign. If Tuesday sees Sanders lose Minnesota, where recent polls see him holding an average lead of one point, it means his campaign's momentum has dwindled to irrecoverable levels after Clinton's decisive win in South Carolina. Moreover, failure to snag a decent portion of 252 delegates up for grabs in Texas, where Clinton is leading, could spell trouble for Sanders in the overall accumulation of delegates.

The Democrats' proportional system of delegate allocation means the margin of victory (or defeat) is sometimes more important than the actual victory. For example, prior to Clinton's overwhelming victory in South Carolina, a virtual tie in Iowa helped Sanders narrow the gap between himself and the former secretary of State to just one delegate despite having been officially declared the loser in two of the three states. With Clinton now holding a 26 delegate lead going into the biggest voting day of the primary, the margins of Super Tuesday primaries will matter more than the actual wins in determining whether the Democratic nomination remains a fight to the finish.