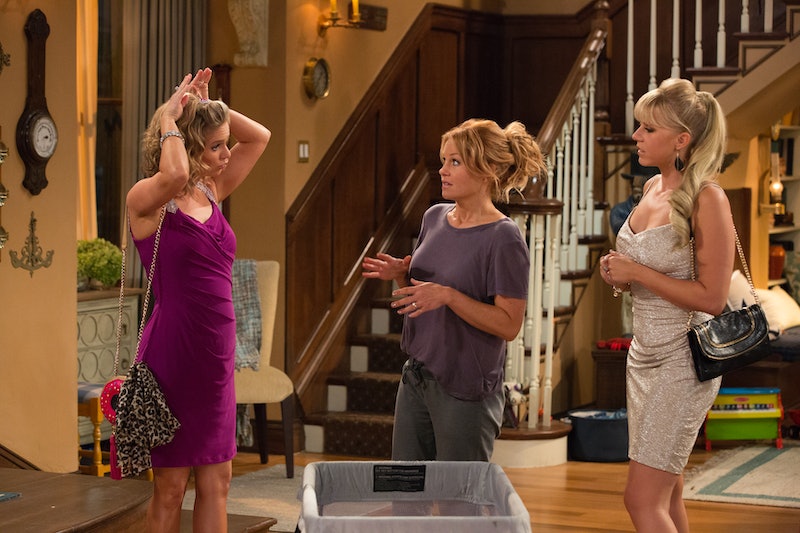 In the words of D.J. Tanner, "Oh, Mylanta!" I say this not just because I'm beyond thrilled to have these Full House characters back in my life (which is totally true), but I also say it out of complete and utter shock of how many dirty jokes were made on Fuller House throughout the course of its first season. Of course, I knew the switch from primetime to a streaming service might change up a bit of the dialogue from time to time, but that still didn't make hearing perverted punchlines from these normally G-rated characters any less easier to endure. In fact, I don't mind admitting that at some points I quite literally cringed. Not because of my own personal taste in comedy (trust me, I like a masturbation joke just as much as the next girl), but to see it expressed among these wholesome characters was enough to make anyone scream "Have Mercy!" (Seriously, writers, please have mercy.)

Maybe it's something I could get acclimated to over time? But for now it was just plain shocking and made me yearn for the days of innocent lullabies and framed pink bunny wallpaper. Granted, it wasn't something that happened all the time, just sporadically throughout various episodes. But just in case you may have missed some of them and purposefully want to tarnish the innocent image you have of this show and its characters, here are some of the dirty jokes that I picked up on... you know, right before bleaching my brain of its entire existence.

1. The One Where Steph's Boobs Take Centerstage

When Stephanie catches Baby Tommy looking at her very prominent cleavage before a night on the town, she says: "I know these might look like lunch, but this Dairy Queen is closed." Logically, I know that she's an adult woman now and this statement should not be a big deal. But old habits die hard and there's a big part of me that will always think of her as an innocent little child, so any talk of her lactating or breast feeding even in a joking sense just seems odds.

2. The One Where Danny Talks About His Feather Duster

This was while talking to his very attractive new wife, mind you. And I couldn't help but feel like this feather duster served as a double meaning.

3. The One About Kimmy's Kama Sutra Skills

According to her estranged husband, Fernando, Kimmy is highly skilled in the bedroom department — a fact that I could've probably gone my entire life without knowing.

4. The One About Kimmy Being A Peeping Tom

After Danny reprimanded Kimmy for not knocking before entering the house (since he could've been walking around naked), she responded by saying it's "nothing I haven't seen before." Apparently, Kimmy's second story window looked right into Danny's bedroom, which puts a very creepy spin on their formerly strained relationship. I'm trying really hard not to think about it.

5. The One About Uncle Jesse's Semen

Normally, I'm fine with talking about Uncle Jesse in any capacity, but I draw the line at his semen. However, that didn't stop Becky from begging Jesse to have another baby with her, thus prompting him to say: "Becky, you know that ship has sailed. In fact, it sunk. All seamen lost." TMI, dude.

6. The One Involving Uber

Before heading out for a night on the town, Stephanie suggests that D.J. just change her clothes in the Uber she ordered. And when D.J. expresses concern about the Uber driving seeing her "boob-ers," Joey follows it up by saying, "Well, then you won't have to tip." The Joey Gladstone I knew would've cringed at the thought of D.J. showing anyone her boobs, let alone a stranger. But now I guess it no longer warrants an overprotective parental reaction? Nope, I'm not ready for this, people!

Dancing With the Stars professionals Maks and Val Chmerkovskiy guest starred in an episode and appeared to be highly interested in both D.J. and Stephanie. So much so that when they found out that the two women were also siblings, they commented on how things between all four of them could get "kinky." Why are you putting these thoughts into my head, writers. Whyyyyy?!?!?!)

9. The One With The Plumber

After mistaking her surprise blind date was the plumber she had called, D.J. explains to him that "I don’t need conversation. I just need a man to get to work on my pipes." And now I can't unseen what I just wrote.

10. The One With The Baseball Cup

To be fair, this is less of a dirty joke and more like just a really gross comment, but having Stephanie's boyfriend describe the joy it feels to take off your baseball cup after a double header still had the same time of crippling effect to my brain. I may never be able to function properly again. (Not that I ever really did in the first place, of course.)

11. The One With The Becky Special

Look, I'm happy that these two are still very much in love after all these years, but no one needs to hear about Uncle Jesse giving himself the Becky special, especially when there are infants present. Have Mercy!