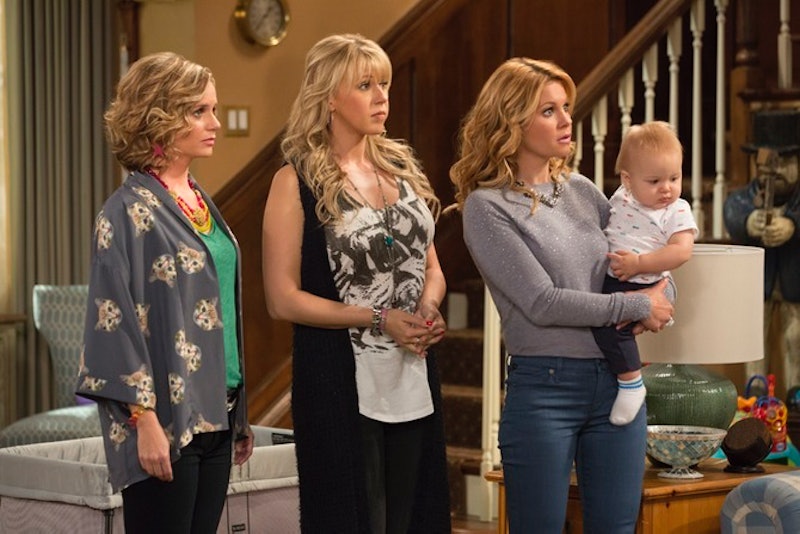 The problem every remake or revival series faces is the possibility of tarnishing the memory of the original show. What if it fails to recapture the magic that made viewers love it in the first place? (These are the things that keep me up at night.) However, at the same time, it's important for a spinoff to feel like its own distinct entity. Therefore, it should refrain from using the audience's nostalgia as a crutch. These are all things that are important to think about as you work your way through Netflix's Full House revival series, Fuller House . Yes, the characters will be very familiar, and everywhere you look there will undoubtedly be subtle (and maybe not-so-subtle) references to its prime-time predecessor, but don't expect everything to be exactly the same as you remember it. Fuller House is different than Full House in many ways. I mean, how couldn't it be, after a 20-year gap between the two shows? But that doesn't mean it won't still feel like home.

In many cases, change can be a good thing, and since the world has evolved, it makes sense that these characters would also grow and change along with it. (Just think about how much you've changed over the past 20 years.) But just in case you need a little preparation and forewarning before leaping into this new Tanner-filled world, here are a few of the major ways this Netflix series will be different from its '90s predecessor.

While it's true that the overall look of the Tanner house resembles the original in an almost uncanny way, there have been a few touch-ups to this beloved set, as we saw in the Fuller House trailer. For instance, there's a brand-new paint job, and other wall accessories. (Though, for some reason, the makeover didn't also involve buying a new couch?)

2. New Catchphrases Will Be Introduced

Naturally, there will still be the traditional standbys like "How rude" and "Have mercy," but this series will update its vocabulary in a big way, introducing new shticks and terms that didn't exist back in the original show's heyday. (You'll know what I mean when the word "fleek" gets brought up in conversation.)

3. Many Cast Members Will Have Less Screen Time

As much as Fuller House is capitalizing on all of the main characters returning, it's important to remember that DJ, Stephanie, and Kimmy are the main stars of this spinoff. You won't see Uncle Jesse, Aunt Becky, Danny, or Joey as much as you did back on Full House. It's hard to say whether this will be to the show's detriment or not, but don't worry. You'll still get some face time with the old crew ... just maybe not as much as you would like.

4. Singing And Dancing Will Be Commonplace

Not that this series has ever shied away from musical moments ("Forever," anyone?), but Fuller House will incorporate a lot more dancing and singing numbers in a short amount of time. (I'm talking, like, full-on dance routines and Dancing With the Stars-type moves, if the trailer is any indication.) So get ready to bust a move like you never have before.

5. The Curious Case Of Michelle

As we all know by now, Michelle will not be making an appearance this season, and I have a feeling the show will definitely feel the weight of that absence. I mean, what is Full House without its youngest Tanner girl? Sure, the characters will make mention of her, but it just won't be the same without Uncle Jesse's little munchkin.

6. Dirty Jokes Will Come Into Play

7. Kids Are No Longer The Main Characters

Audiences fell in love with young DJ, Stephanie, and Michelle right from the instant they stepped onto our television screens. Unfortunately, I'm not sure the same can be said for the new kids on the block. Not that they don't have the potential to be well liked; they just aren't given all the much to do, according to MTV News. Their purpose is less to steal the show with their adorableness like the Tanner girls did and more to just drive home the point that these ladies are now adult women with kids.

8. There Will Be A New Puppy To Love

Whether this adorable canine is a descendant of Comet or not, it'll be interesting to see how this pup is used for comedic timing and the general "awww" factor. But if the initial promo is any indication, this dog is going to be a welcome addition. Plus, it just wouldn't be a true Tanner family reunion without a lovable golden retriever to steal the show.