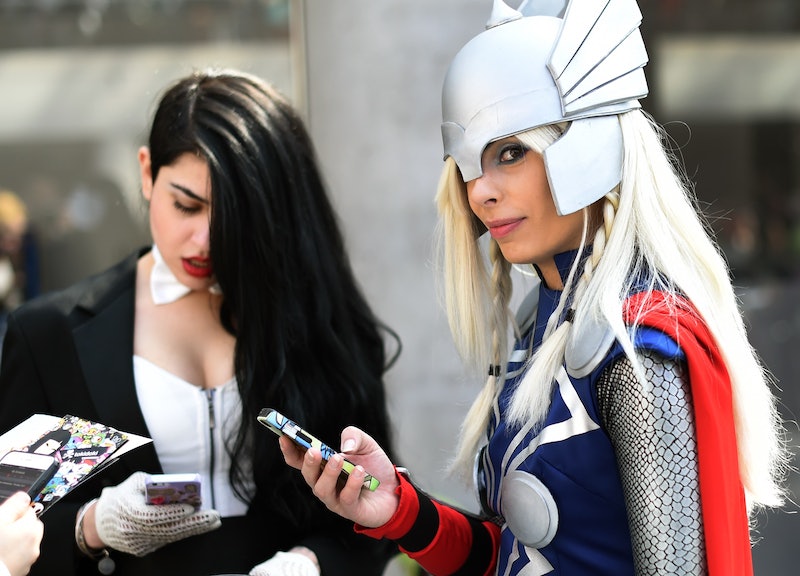 If you’re someone who is deeply devoted fan (of anything, really), fandom may make up a significant part of your mental, emotional, and social life. If you’ve ever emerged from a six-hour long fanfic binge and found yourself wondering “Hey, where did the word ‘fandom’ come from, anyway?” (and also “When did it turn into tomorrow?!”), you’re in luck. (Well, partially. I can tell you about the origins of the word “fandom,” but I can’t reverse your decision to start a 250 thousand-word fic at one AM. Sorry ‘bout that.)

In many ways, fandom can seem like a very modern, internet-based phenomenon, but Millennials were far from the first people to get really, really excited about their favorite things. Long before the Internet was invented, fan groups were publishing fan magazines, attending cons, writing fanfic, and making fanvids. The word “fandom,” too, has been around for a long time — well over a century, in fact.

The history of the word “fandom” starts with a very old word — “fanatic.” “Fanatic” arose out of a Latin word, “fānāticus,” which, in turn, came from the word “fanum,” meaning “temple” or “shrine.” According to The Latin Lexicon, “fānāticus” carries three meanings:

The Oxford English Dictionary (OED) states that “fanatic” made its way into English in 1533, as an adjective meaning “frenzied” or “mad.” It first appeared in print as a noun, meaning “a visionary; an unreasoning enthusiast,” in 1644. In the second half of the 17th century, the English used “fanatic” as an insult, referring to Nonconformists (aka Protestants who wouldn’t adhere to the Church of England).

It didn’t take too long for people to shorten “fanatic” to “fan”; variations of “fan” appeared in print as early as 1682. It wasn’t until the late-19th century, however, that “fan” began to be used in relation to sports enthusiasts (especially baseball devotees), separating the term from its original religious connotation. (That said, anyone who has participated in their fandom having a collective meltdown at the promise of new episodes, or when actors seem to acknowledge fans’ OTP will recognize themselves in the early association of “fanatic” with overwhelming religious fervor.) (And I say that with love — if my favorite fandoms are melting down, I’m usually right there in the pot with everyone else).

“Fandom” finally makes an appearance in 1903, when the Cincinnati Enquirer printed, “Fandom puzzled over Johnsonian statements.” The OED reports that Publisher’s Weekly mentioned “baseball fandom” in 1928. “Fandom” is a combination of the “fan” with the suffix “-dom.” Etymologist Michael Quinion suggests that “-dom” has two meanings when applied to words; in one usage, the suffix “denote[s] a rank or an area controlled by a person of that rank” (so a “kingdom” is the area controlled by a king, an “earldom” is the area controlled by an earl, etc). In its second usage, “-dom” refers to “a state or condition.” (“Wisdom,” for example, is the state of being wise.)

Although “fandom” is generally used to refer simply to a collection of fans, I like the idea of taking both of these meanings of “-dom” literally. If we read “fandom” the same way as “kingdom,” then it would literally refer to a region controlled by fans — a meaning that I think expresses something essential about fandom: It is a group dedicated to showing devotion to some object (a show, a comic, a sports team, what-have-you), but it is also a site of production generated and controlled by fans — a space where fans create their own language and communities, and where they reimagine characters and worlds into something that is uniquely theirs. And if we define “-dom” in this case as a state of being, similarly to words like “wisdom” or “freedom,” then “fandom,” too, is a state of being, a condition that fans have. That definition — the idea that fandom isn’t simply an external community, but also a mode of being — will ring true to anyone who’s ever been deeply enmeshed in a fandom. You know who you are.