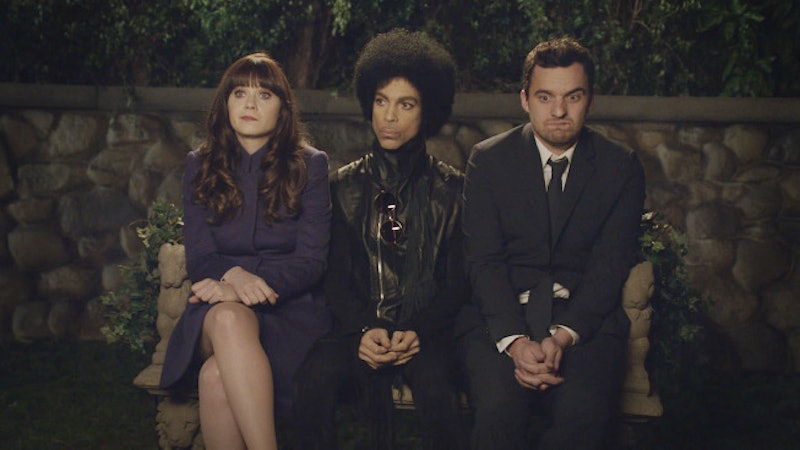 "Look, I'm in a limo! I wish I had really long legs so I could stretch 'em out the length of them limo!" says Jess. "Well have fun! I love you," yells Nick. Cue finger guns... and the Super Bowl episode of New Girl . It had Prince and everything.

Super Bowl episodes have long tended to be flashier than, say, regular episodes of television, because what the hell else are you gonna do with tens of millions more viewers already conveniently packed in front of the TV? Glee gave us "Thriller" and zombies, Alias gave us a lingerie montage and some serious cliffhangers, and Grey's Anatomy gave us that bomb episode.

New Girl gave us Prince as their shiny bait — complete with the adorableness of Prince actually being the one who asked them if he could be on the show. But that's not all they gave us: New Girl also gave us, as was touched on above, the first "I love you" between Nick and Jess.

If you've been following Nick Miller and Jessica Day for a while, it's notable that it was Nick, not Jess, who said the words first — quite the accidental (though very narratively sound) reversal of roles between the girl who started the series jumping into love too quickly and the man who runs away from all situations in which he does not know the outcome.

But that's the beauty of Nick and Jess. In fact, we talked just last week about how great it can be to watch Nick open up and let his fears go with her. And it's hardly like she's taken Nick's old place here — she may have responded to Nick's "I love you" with some ill-timed finger-guns, but that was more out of shock than phobia. She loves Nick, and Nick really really loves her; we've known this or a while.

Luckily, Prince is around to save the day from those dastardly finger-guns, and out of that we get both a makeover montage and a playing-around-with-Prince montage. And then Jess says it back, and these two crazy kids are solid again, and what's really crazy is how solid they've been this season, considering how easily it could have blown up in everyone's faces by now.

The writers are going long-haul on this one; they've committed. Which isn't to say these two won't break up by the end of the season; they very well might. But it is to say that Nick and Jess's journey this season has been all about finding a truly great, supportive, fun love in two lives that had been ripped to shreds by love before.

There's been a lot of mutual adoration, and the conflict hasn't been in wondering every episode whether or not now's the time they'd blow up and break up (a tactic employed by many a television storyteller), but in the writers accepting that some very real, compelling conflict can be found in even the most healthy of relationships, especially near the beginning. Next week's "Exes" promises to explore that even more.

But, like, how do you move forward with your life once you and your entire friend group has performed live onstage with Prince? That can't be easy.