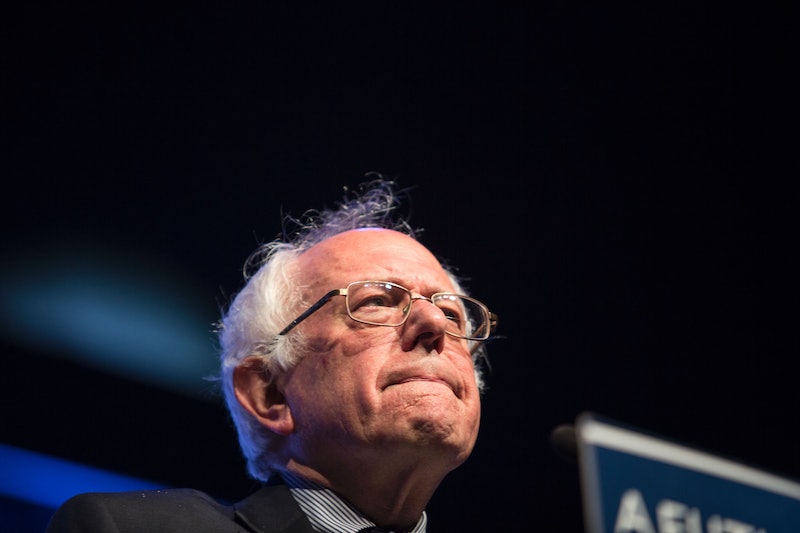 Within minutes of polls closing, frontrunner Hillary Clinton was declared the winner of the South Carolina Democratic primary. The impressive showing has been compared to Vermont Sen. Bernie Sanders' decisive win during the New Hampshire primary. Stats and predictions prior to polls even opening on Saturday had suggested that the former Secretary of State would win effortlessly in the Palmetto State. It appears as if Sanders ignored those projections, however. The candidate was reportedly on a flight bound for Minnesota without wifi shortly after polling places were closing. For that reason, Bernie Sanders' South Carolina concession speech came a bit later than expected.

Surprisingly, Sanders delivered his speech outside of South Carolina, though the candidate's team was holding events in both Charleston and Columbia. As with the statement he released following his South Carolina loss, Sanders appears firmly focused on continuing his campaign rather than wallowing in the Palmetto State. Sanders appeared to spend copious resources campaigning in South Carolina, yet he seems to have little to show for his efforts. A Sanders rally the day before the primary was reportedly poorly attended. Judging by the marked difference in votes between Clinton and Sanders, the momentum he'd claimed in a close Nevada Caucus has appeared to stagnate. Sanders had just enough time to concede his defeat and congratulate Clinton on a hard-earned victory prior to his plane taking off.

In the face of such a momentous loss, Sanders nonetheless appeared energized and ready for his campaign challenges ahead. He had this to say as he began his concession speech at The Mayo Clinic Center in Rochester, Minnesota:

Rep. Tina Liebling, thank you so much for that introduction. You said it all. What this campaign is about is not just electing a president. Yeah, that's pretty important but there's something that is more important and as Tina just said, it is about transforming America. It is about thinking big and the kind of country that we want to become. It is understanding something that the media will not tell you or talk about much, is that in the last 30 years, there has been a massive redistribution of wealth. The problem is, that redistribution has gone in the wrong direction.

Sanders' speech continued to touch upon many of the hot button issues that have become hallmarks of his campaign, including the aforementioned comments on wealth redistribution and income equality as well as how his fellow candidates have been financing their campaigns. He ranked not having a super PAC as being the most important difference between himself and Clinton, paraphrasing Abraham Lincoln in calling his candidacy a campaign that is "by the people, for the people."

The candidate mentioned many underserved communities as well as the country's problematic prisons and jails, vowing to "take on and fight institutional racism and a broken criminal justice system." Sanders continued:

We spend $80 billion a year of taxpayer money locking up fellow Americans. There are a lot better ways to spend money than locking up fellow Americans. This campaign is listening to our brothers and sisters in the Latino community and they are telling me that they are tired of being exploited, tired of living in the shadows, tired of seeing a family member being deported and families being separated. And what they want and what I want is comprehensive immigration reform and a path towards citizenship.

Perhaps the most energizing portion of Sanders' lengthy speech was when he hammered home just how important his supporters' grassroots efforts have been. Sanders made it clear that his campaign transcends presidential aspirations and is meant to empower the American people. "What the political revolution is about is revitalizing American democracy and making sure that every American understands that yes, football is a spectator's sport; democracy is not a spectator's sport," Sanders said to massive applause. Sanders continued:

Every person in this room is extremely powerful, if you choose to use your power. And what I will tell you, because I am in the U.S. senate and see how things get done: there are people up there who have incredible wealth and power and what they want is for Americans not to vote, not to be thinking about politics, not to get involved in the shaping of the future of America... Our job is to take them on and to say that men and women fought and died for American democracy. And we are going to revitalize American democracy. We are going to have a government that represents all of us, not just a handful of campaign contributors.

The candidate's speech lasted well over 45 minutes and felt, at times, less like a response to his loss in South Carolina and more like rallying remarks as he continues to campaign in the Super Tuesday state of Minnesota. He has shifted his focus so firmly that his continued quest for the presidency is simply undeniable.