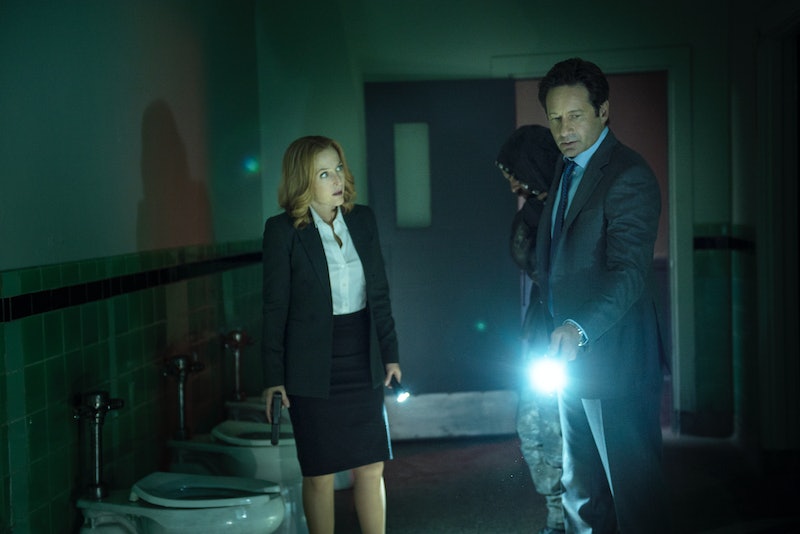 To me, an OG Mulder and Scully fan, it seemed like The X-Files revival was over in the blink of an eye. I’ve been waiting since 2008’s theatrical release I Want To Believe to see the agents trade theories and loaded glances again, and six episodes were hardly enough to satiate this long-term craving. The event series closed out with last Monday’s finale, “My Struggle, Part II,” leaving fans with a litany of unanswered questions and, in my case, slack-jawed shock. Fox hasn’t announced a renewal yet, though most signs are pointing towards The X-Files Season 11 happening eventually. The network has hinted in that direction, and the stars and showrunner have all shown interest in continuing the work.

So what is everyone waiting for? I know contracts have to be signed, agents made happy, and schedules cleared. But there has to be a Season 11 of The X-Files (or Season 2 of the revival, however you want to describe it). There just has to be. The only other option is that I will potentially

explode. I don’t care if I need to wait another year for the door to that basement office to reopen, as long as it eventually does. Mulder and Scully still have important work to do, and so does the show. Here are 12 indisputable reasons why The X-Files needs to come back for more episodes.

1. That Cliffhanger! You Can't Leave Me This Way!

"My Struggle, Part II" ended on a splashy note. The aliens, always with a flair for the theatrical, seem to have shown up just as a large portion of the human population — including Mulder — was about to be felled by a fast-acting virus. And then what? And then what?

2. William Is Still Out There

The whereabouts and well-being of Mulder and Scully's son, William, who Scully put up for adoption for his own protection, has been an ongoing theme in this set of episodes. I was sure we'd see his face by the end of Season 10, but William is still in the ether. Reunite this family now, please.

Speaking of families: Fox Mulder and Dana Scully. Like a lot of fans, my reaction to the news that the agents/lovers/timeless soulmates would be "broken up" in the revival was 100 percent, pure "Huh?" Clearly whatever made-up obstacle drove this narrative wedge between them wasn't stopping Mulder and Scully from growing close again during the course of these episodes. Now, if they could only be allowed that sex scene I've been waiting 23 years for.

The resurrection of Mulder's three goofball conspiracist buddies was touted with great fanfare, but all Langley, Byers, and Frohike got in the end was a brief cameo during an inexplicably bad drug trip fantasy.

5. Where In The World Is John Doggett?

Mulder's by-the-book latter season replacement was doomed by that status not to be the most popular guy on the show. Still, he played an important role in Scully's life as she dealt with her last partner's disappearance, and he was just a good dude in general. Surely he warrants a little Season 11 screentime.

6. Maybe He Can Fix Whatever's Happening With Monica Reyes

Can I ever forgive The X-Files revival for destroying the character of Monica Reyes, who would never in a trillion years team up with CSM and the Syndicate? Check with me in a couple of decades.

7. So Many Fan-Favorite Monsters To Revive For A Victory Lap

It's a running joke in the fandom that Mulder and Scully are terrible agents, who have yet to solve even one case. Plenty of old-school monsters walked, flew, or slithered away free, leaving them available for a comeback. Eugene Victor Tooms, anyone?

Breaking Bad and Better Call Saul showrunner Vince Gilligan made a name for himself in genre TV by writing some of the best, creepiest, and laugh-out-loud funniest episodes of The X-Files' original run. Surely he can cut out a few nights of sleep to grace this revival with one of his scripts.

9. Scully Needs A Desk & A Nameplate

I want an entire episode devoted to this. Scully goes desk shopping. Scully picks out a font. Scully makes Mulder put together the desk for her dressed in jorts and a grey tank-top while she watches with a cold drink.

And just flirting in general. It really never does get old.

Mulder has officially run out of reasons not to kill this guy. The conspiracy is much bigger than him anyway. Let's allow the show to put its first and greatest big bad to rest, once and for all.

12. Bring On The Homage Episodes!

The X-Files is a sometimes messy, sometimes euphoric mishmash of genres. Some of its best hours, like the B-movie tribute "Post-Modern Prometheus," lean into those instantly recognizable elements and give them the ol' X-Files twist. I want to see what else the creative staff has up their sleeves.

But the #1 reason for ordering more of The X-Files? They still haven't found that "truth" thing I keep hearing about.