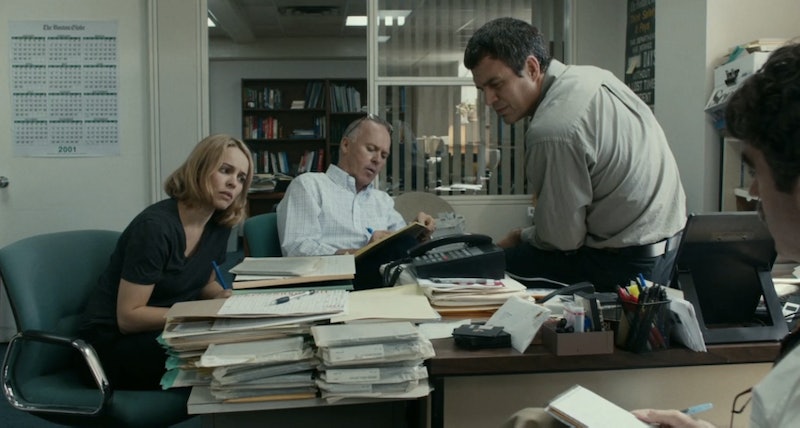 After being acclaimed by critics pretty much across the board, Spotlight won Best Picture at the 2016 Oscars and cemented its place in history. The film is about a group of journalists from The Boston Globe who, in the early 2000s, investigated cases of child sex abuse by Catholic priests. (A topic which Pope Francis has spoken out about.) The film is praised for showing the importance of investigative journalism, and the subject matter at hand is without a doubt heavy and emotionally charged since the film is based on actual events. Spotlight's Best Picture win shows that in Hollywood true stories continue to reign supreme on the awards circuit, which is no doubt because of the emotional impact they're able to have on viewers.

Four of the past six Best Picture winners (12 Years A Slave, Argo, The King's Speech, and The Hurt Locker), have been based on historical events or true stories. It's a known fact that Academy voters love these types of movies, especially recently, and this year's win keeps up that pattern. On top of that, of the eight movies nominated for Best Picture this year, half fit the historical drama/true story description and three of them (The Revenant, The Big Short, and Spotlight) were the top contenders this year for the award.

In a world where it seems like there's a new remake or sequel being announced every week, it's easy to see that there's a disconnect between the films that are winning awards and the type films that are being produced in droves. In the past it was more common for blockbusters to get nominated for awards and win. For instance, in the '90s and early 2000s, Best Picture winners included movies like Gladiator, Titanic, and The Lord of the Rings: The Return of the King. But studios both want to make money and win awards, which has made it seem that recently films either fall into the category of "Oscar bait" or "sequels and remakes". Of course, there are films that don't fit neatly into either category, but the amount that can be boxed into one or the other seems to be more than ever before. This is not to say that sequels can't be amazing films or that directors whose movies are called Oscar bait only exist because the people behind the camera want awards, but there is more of a disparity than there has been in the past.

When producers Blye Pagon Faust, Steve Golin, Nicole Rocklin, and Michael Sugar accepted Spotlight's Best Picture Oscar, Sugar said, "This film gave a voice to survivors and this Oscar amplifies that voice, which we hope will become a choir that will resonate all the way to the Vatican." Spotlight is a film that was made to make a difference in the world and one way it did that was by having an emotional effect on those who watched it. To call it Oscar bait cheapens that — and cheapens the work of any actor or filmmaker, for that matter — and it is unfortunate that films like this and many others aren't given the advertising of the "safe bet" films and therefor aren't seen as widely.

Considering trends come and go when it comes to Hollywood, it'll be interesting to see how this plays out. Will historical films continue to dominate at the Oscars while action movies dominate the box office? (For reference, Spotlight grossed $61 million worldwide, while The Revenant made $404 million and action sequel Jurassic World , $1.6 billion ). With an ever-growing focus on money, it's hard to see the division between awards movies and blockbusters closing rather than opening further, but I would hope that a change is made at some point that bridges the gap and perhaps gets more seats filled in the theaters of movies, like Spotlight, that literally change lives.