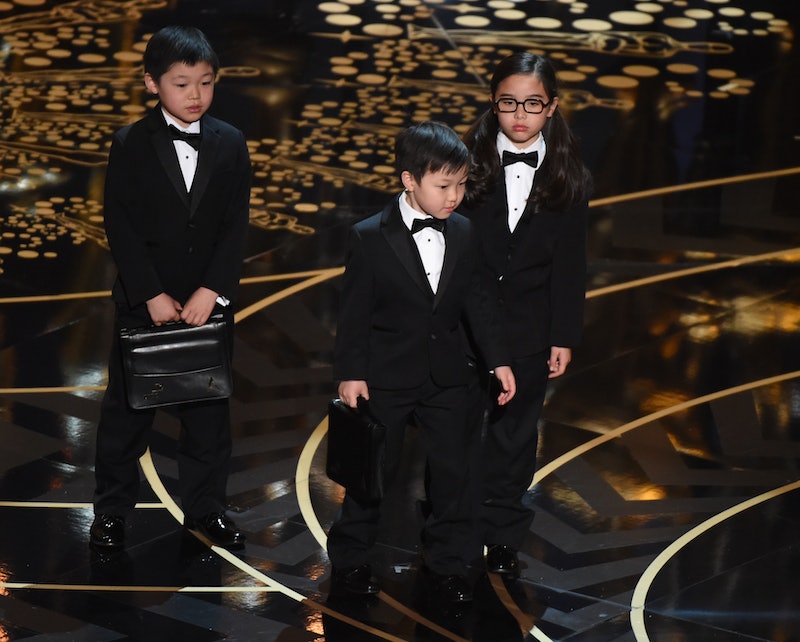 If you tuned into the Oscars on Sunday night hoping to see Chris Rock take on the Academy's lack of diversity and Hollywood racism, then you were probably happy with the host's opening monologue. Rock spared no one in his smart and hilarious bit, which called out the Academy and Hollywood for the underrepresentation of black actors. Throughout the show, he continued to make his point, filling his time on-stage with quick jokes and one particularly memorable montage putting black actors into Oscar-nominated films. But there was one huge thing missing from Rock's call for diversity: a reference to Asians, Hispanics, and all other minorities.

Their absence came up occasionally throughout the show; a random man featured in Rock's Compton movie theater bit brought the subject up, Kevin Hart recognized performers "of color," and the Mexican director Alejandro González Iñárritu won for Best Director. But their biggest moment came, unfortunately, when Rock made an insensitive joke about Asians. If you missed the segment, here's the joke: Rock introduced accountants from PricewaterhouseCoopers, the firm that tallies the votes for the Oscars, and three small Asian children emerged. "If anybody's upset about that joke, just tweet about it on your phone that was also made by these kids," Rock said after their introduction.

He has a point: the child labor joke exposes the hypocrisy of viewers who are quick to express outrage, but perfectly happy to benefit off the exploitation of child workers. But as a whole, it was uncalled for and incredibly offensive, especially when put into context. The entire night was about the Academy's lack of diversity. Looking back at the history of the Oscars, black performers and filmmakers have been drastically underrepresented, but Asian and Hispanics have been even more underrepresented (there have only been three Asian nominated actors in the past 20 years — all for supporting roles, all of whom lost). And yet Rock never mentioned any non-black minorities throughout the three-hour show except to make a model minority joke about Asians, and then double down with a quip about child labor.

For the only mention of Asians to come as the butt of a joke is a slap in the face. It's one thing to be completely ignored in the call for diversity, but it's another to be made fun of — repeatedly. Because it wasn't just Rock; later in the show, Sacha Baron Cohen, who appeared as his persona Ali G, made fun of the Academy's lack of diversity by saying this: "How come there is no Oscar for the very hard working little yellow people with tiny dongs? You know, the minions!" It garnered some laughs, but there's no denying its racist implications.

Rock and Cohen's jokes were especially disappointing considering that Sunday night's show was supposed to be about a push for inclusion. Hispanics and Asians have been completely left out of the #OscarsSoWhite conversation, and the ceremony just made that even clearer. Having Korean actor Lee Byung Hun present an award wasn't enough to make any real change — an actual effort by the Academy, and Hollywood as a whole, would have at least included using the overall term "people of color" when talking about racism and diversity in Hollywood.

The fact that Rock and Cohen's jokes made it to the show is evidence of how Asians and other minorities are ignored in talks about on-screen diversity and left out of Hollywood. Even worse, it sends a message that there is absolutely no desire from the Academy or the Hollywood system to increase their visibility in film and TV. It's infuriating that Asian filmmakers (and Hispanic, Middle Eastern, etc.) are rarely given the same opportunities in film as others, and are then used as props for tasteless jokes.

Any push for diversity in Hollywood must include all minorities. I'm upset about the jokes made by Rock and Cohen at the Oscars. I'm going to keep talking about it, and I won't stop until more minorities are included in the conversation.