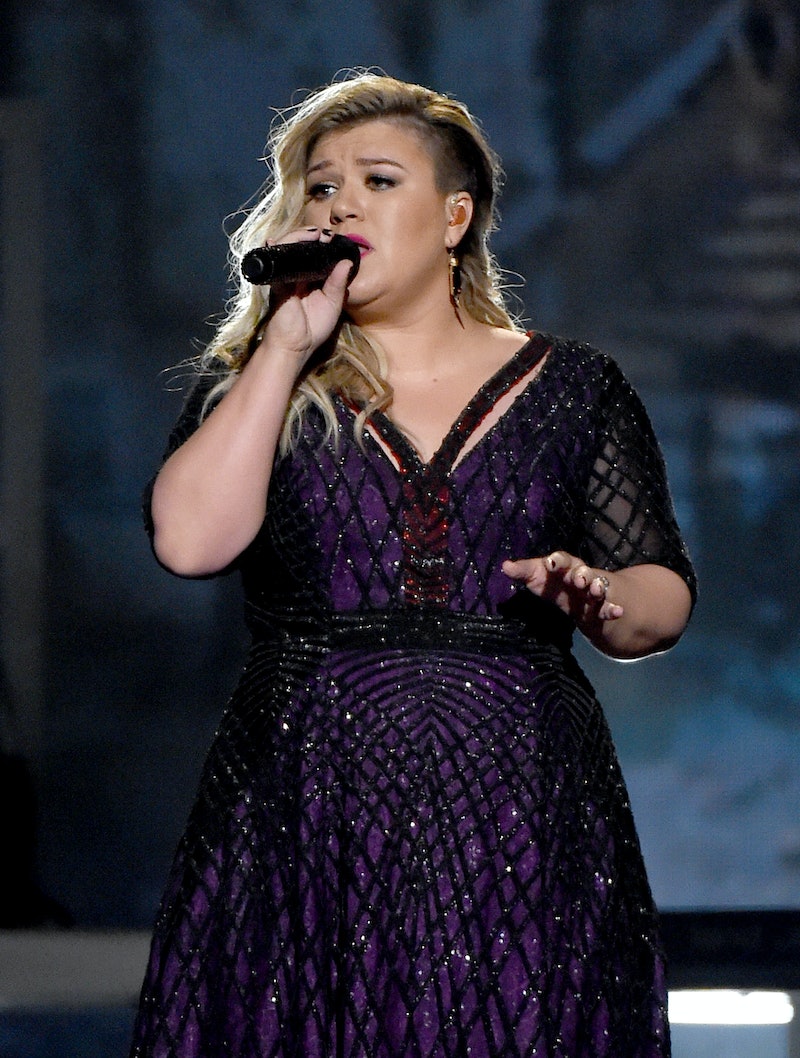 By now, you've probably seen Kelly Clarkson's stunning "Piece By Piece" performance on American Idol (and if you haven't, you need to check it out immediately). The 33-year-old singer stopped by the final season of the groundbreaking reality series on Thursday last week to say her goodbyes — and to remind us, once again, why we fell in love with her in the first place. She truly is one of the best vocalists in the music industry today. The fact that it was (probably) her last Idol appearance seemed to be weighing heavily on Clarkson as she took the stage to sing "Piece By Piece"; however, the song's lyrics, which touch on issues of parenthood and abandonment, also seemed to be making her feel emotional. Understandably, many people are now wondering: Who is Kelly Clarkson's "Piece By Piece" about? Let's find out.

When asked about her "mind-set" while writing "Piece By Piece" during a March 2015 interview with Glamour , Clarkson responded:

I had [my daughter] River, and even from holding her the first day, I was like, how could anyone walk away from that? Then I started thinking that my husband [Brandon Blackstock] is such a great father. He's not an audience guy — he is onstage doing the work with me. He changes diapers, he stays up, and if I've had a late night, he'll wake up with her in the morning. We're definite partners, and I felt so lucky.

In November 2015, Clarkson told CBS This Morning co-host Gayle King that her husband, Brandon Blackstock, was "the complete opposite" of her father. "How so?" King asked. "Well, he was present," Clarkson replied with a laugh. "He wins for being around."

Clarkson's father left her family when she was young, and in her aforementioned Glamour interview, she revealed that his absence partially inspired "Piece By Piece." Although she admitted that it's difficult for her to sing the lyrics without crying (as we saw on Thursday evening), she said it's ultimately "a positive song":

It's a positive song, even though I know it sounds sad. I don't know what my father went through as a child, and I don't know why he left and made the decisions he made, but everyone's human. I don't understand it for me, but I understand the depth of what that is—having a child—now, and he's made me want to be that much more present in my family.

In August 2015, Clarkson announced that she's pregnant with her second child. She hasn't revealed a name yet, but she wrote in an October 2015 Instagram post that her daughter, River Rose, will be getting a baby brother.

Shortly after Clarkson's performance last Thursday, "Piece By Piece" topped the iTunes chart — and four days later, it's still No. 1. On Monday, she released a special piano-only version of the song — the same version she sang on Idol — for her fans to enjoy.