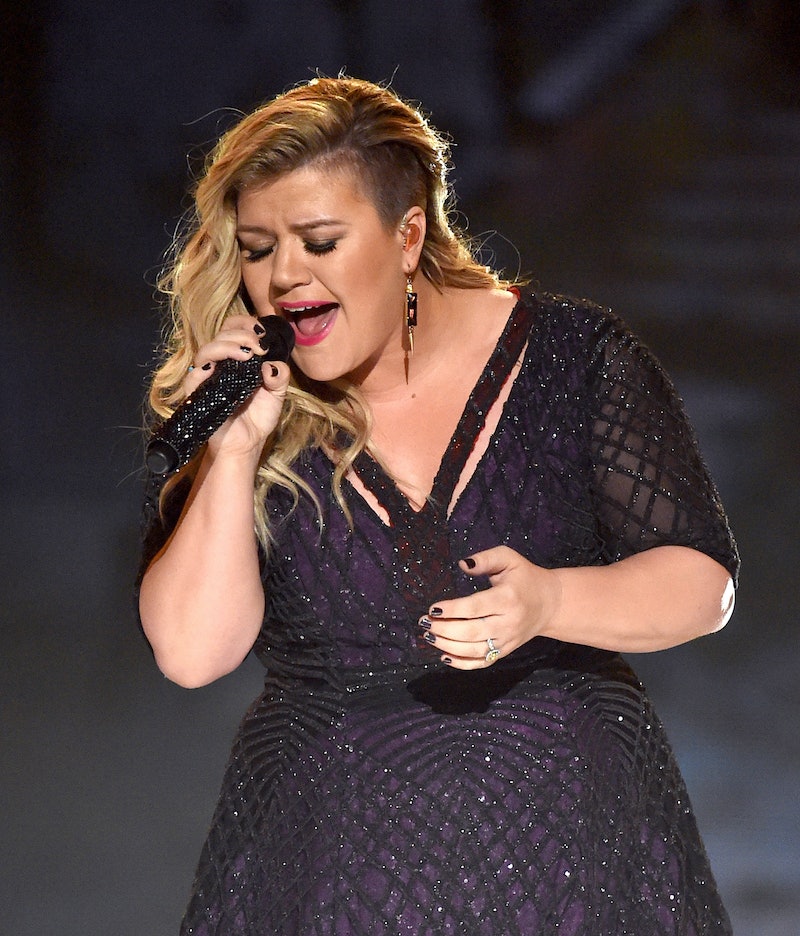 On the Feb. 25 episode of American Idol, Kelly Clarkson returned to her roots. She performed on the very stage where she got her start in 2002 and belted out an emotional ballad called "Piece by Piece." There was not a dry eye in the house. In fact, I even got choked up watching from home. The song recounts Kelly Clarkson's relationship with her estranged father and how feeling abandoned by him inspired her to never want her own children to feel that way. Highlighting a major contrast, she also sings about how her husband, Brandon Blackstock, "restored [her] faith that a man can be kind and a father could stay." The lyrics directed at her dad include:

After seeing the emotional performance, fans can't help but ask: Who is Kelly Clarkson's father? According to a 2007 biography from Fox News, Stephen Michael Clarkson is a former engineer. While Fox says his first name is Michael, the majority of other sources say it's Stephen Michael. The fact that his exact name isn't confirmed reflects how there isn't much info about him available. He divorced Kelly's mother when she was just 6-years-old. Kelly is the youngest of three children and in a 2009 interview with SiriusXM, she revealed she grew up separately from her siblings — although now they're closer than ever. As kids, her sister lived with her aunt, her brother stayed with her dad, and Kelly was with their mom. Since then, her dad has gotten remarried and has two sons with his second wife.

Meanwhile, in a March 2015 interview with Glamour, Clarkson explained the story behind "Piece by Piece" and how her relationship with her dad shaped the song. She said,

I don’t know what my father went through as a child, and I don’t know why he left and made the decisions he made, but everyone’s human. I don’t understand it for me, but I understand the depth of what that is — having a child — now, and he’s made me want to be that much more present in my family.

She also noted that although the track sounds sad, it has a positive message. As she recalled to Glamour, she had a phone conversation with her sister where they both realized they had positive men in their lives now, which contrasted their situation growing up. Hence the inspiration for the song.

Feeling abandoned by her father not only inspired "Piece by Piece," but also another hit track in 2004. In "Because Of You," she sings about about the aftermath of her parents' divorce. In fact, before filming the emotional music video, she got her family's permission to share their story. She told MTV News in 2005,

It’s about the cycle of families, like you act how your parents acted towards you and then your kids act how you acted towards them, and it’s all about breaking that cycle if it was a bad one... It’s very close to home [for me]. I OK’d it with my family and everything because they think it’s important, because we’re obviously very different now than we were when we were younger. And it’s important for people to see that raw kind of emotion that happens in life.

In the video, a grown-up Clarkson guides around a younger version of herself, watching as her parents fight and her father eventually drives away. It's an emotional music video, to say the least. Similarly to "Piece by Piece," "Because Of You" conveys the message that her childhood influenced the relationships she would have going forward. She sings,

Unlike the other track, the message in this one is more heartbreaking and less optimistic. Still, it's incredibly reflective and a beautiful song. Plus, if "Piece by Piece" is any indication, she's learned to trust again — which is huge progress.

Although they're not close, it's clear from her music that Clarkson has grown from her relationship with her dad. And despite the fact not a ton of information about him is out there, it's probably for the best. After all, her powerful songs speak for themselves.

More like this
Britney Has Been Granted A Restraining Order Against Her Ex-Husband
By Bustle Staff
Who Is Betty Who Dating? The Australian Singer Is Married To Her Tour Photographer
By Radhika Menon
Sadie Sink Would Escape Vecna From 'Stranger Things' With This Taylor Swift Song
By Grace Wehniainen
Zooey Deschanel Can't Be Anyone But Herself
By Samantha Leach
Get Even More From Bustle — Sign Up For The Newsletter