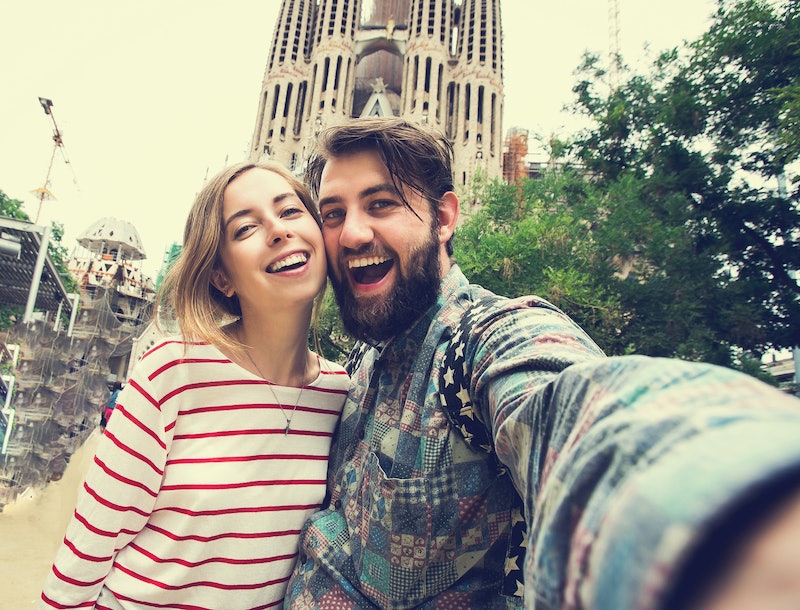 Honeymoons are basically big trips that you take with your partner, just like the month-long journey you took to the South of France when you first started dating and the two weeks you spent together in the mountains of Utah one time. But honeymoons are associated with marriage, so they are usually much more elaborate in scope and price tag — so just how much does a honeymoon really cost? According to new findings from WeddingWire, quite a bit. Their 2015 Newlywed Survey, released today, reports that $3,882 is the average cost of a honeymoon all told, which reveals that people take some pretty extravagant and amazing trips to ring in their marriages.

The survey, which reached out to 6,000 people, including same-sex couples, underlines what we basically already know: People tend to spend bank on their honeymoon. Then again, the cost of travel in general is expensive, and it's easy to spend $3,882 just on round-trip airfare for two people alone — so maybe people are being super frugal, and the cost of $3,882 altogether is actually really impressive. Considering that penthouse suites can often start at $1,500, that honeymoon bill could just be the cost of two nights in a nice hotel and a couple of delicious dinners. So who can say, really, if this average honeymoon cost is high or low. When you consider the top destinations for honeymoons around the world, though, $3,882 starts to sound pretty reasonable.

According to a poll conducted by Agoda.com about the best honeymoon spots, via CNN, they are:

With 20.3 percent voting for the Maldives as their all-time most amazing honeymoon getaway, this destination is pretty darn popular. The tropical nation in the Indian Ocean includes hundreds of islands, which comprise 26 coral atolls, and the area is known for its insanely blue water and dreamy beaches. There are honeymoon spots aplenty in this area, so you can have your pick of resorts and spas.

Crete? Euboea? Corfu? Rhodes? Lesbos? Wherever you decide to touch down, you'll be greeted by white sand and lots of sun. Greece is known for its food and culture, along with its beaches, so a honeymoon here is sure to be luxurious and fun. This is the go-to honeymoon choice of 7.8 percent of voters.

The City of Light was the choice of 7.6 percent of survey respondents, who couldn't resist the beautiful French city for all of their honeymoon needs. Whether it's baguettes and macarons or architecture and art, the city has it all, and won't disappoint even the most die-hard of romantics.

The survey found that 7.1 percent would like to hit Bali for their honeymoon, which should surprise no one. This Indonesian island boasts forested volcanic mountains and incredible beaches, and their honeymoon game is on point. If this is your dream post-wedding destination, you're in good company.

Whether Kauai or Honolulu is your final destination, you're pretty much guaranteed to have a picturesque vacation in Hawaii, and this is all the more true if you're hitting this U.S. state for a honeymoon. The study found that 6.6 percent would like to bask in the glow of a Hawaiian honeymoon of sand and sun.

Anyone who has ever been to Tuscany knows how insanely gorgeous the rolling hills and dales of that area are, and I can definitely picture a winning honeymoon at this lovely spot. The first thing that automatically pops up in Google after typing in "Tuscany" is "honeymoon," so the 6.5 percent who said they'd like to go here are not alone, it seems.

Bahamas, Turks and Caicos, Puerto Rico — the list goes on and on (and on), but if your choice is a Caribbean island, rest assured that you'll find the perfect one. You may have to do some research, as there are so many islands to choose from, but regardless of where you pick, this seems to be a very popular honeymoon choice, with 5.7 percent opting for it.

Just behind Caribbean islands is Tahiti, with 5.6 percent of the votes. Tahiti, an island in French Polynesia, is shaped like a figure eight and has crazy-awesome things like black sand beaches, lagoons, waterfalls and two extinct volcanos. It also has a ton of honeymoon websites full of couples kissing passionately, FYI.

New Zealand is known for its wildlife, from wallabies to kakapos and lots of exotic things in between, but it's also the honeymoon destination pick for 5.2 percent of respondents, and from the looks of it online, it's very popular among many newlyweds. The official New Zealand website even has a section for those considering the country in the Pacific Ocean for their honeymoon.

Istanbul is supposed to be one of the most stunningly gorgeous cities in the world, and would befit the most amazing of honeymoons. There are tons of recommendations online for the best hotels in the city for those celebrating their recent marriage, and 3.8 percent of those who took they survey said they'd like to hit Istanbul for their honeymoon.

This Thai island is in the Andaman Sea and houses some of the country's best beaches. It's rainforest-y and mountainous, which makes it both beautiful and full of really amazing hikes, plus the swimming options cannot be beat. And, of course, there are plenty of five-star resorts, if you're into that kind of thing. In the survey, 3.5 percent opted for Phuket.

G'day, mate! That's what you could say when you wake up next to your new husband or wife while honeymooning in Australia. If this is your dream honeymoon destination, you're not alone: 3.4 percent of respondents voted for Australia. If you're planning a honeymoon here, you have a lot of ways to go and places you could stay.

The capital of the Czech Republic is super pretty, and has tons of cultural options. From Prague Castle to the Museum of Communism, you're sure to have a packed agenda if you and your partner like to see historical landmarks and go to museums. Prague is totally a honeymoon go-to, with guides on how to best celebrate your love there; 2.8 percent said they'd want to travel here for their honeymoon.

Vegas, baby! If you and your partner are the glitzy type, into dropping Franklins and putting on glittery attire, Las Vegas is the place for you. If you're into a quick Elvis wedding, you could kill two birds by jetting here for a quick ceremony and following it up with a luxe honeymoon. The survey found 2.7 percent would want to come here after a wedding.

The Big Apple is full of just about everything you can possibly imagine, and honeymooners are in good company in these parts. The survey found that 2.5 percent would like to honeymoon here, which really is rather small, but considering that there are pretty much infinite possibilities in terms of travel, any destination that made it to this list counts as being a good honeymoon spot. Honeymoon packages abound.

Alongside New York, the city, is Spain, the country. The survey found that 2.5 percent want to honeymoon here, and the places they can pick vary in scope and flavor quite a bit. From San Sebastián's picturesque beach, funky funicular and old-style city center to the quaint and wonderful hills of Soria, you can't really go wrong when traveling here. There are many, many honeymoon options, too.

The survey found that 2.4 percent want nothing more than to land in Cancún for their honeymoon. The Mexican city is on the Yucatán Peninsula, bordering the Caribbean Sea, and has plenty of beaches and hotels, plus a famous (and infamous) nightlife. Just be sure you're not honeymooning during spring break, unless you're dying to be swept into drinking competitions with undergrads. There are lots of honeymoon suites in this beachy locale.

Look no further than Brazil for the honeymoon location preferred by 2.2 percent of survey participants. The seaside city has world-class beaches that are perfect for snuggling up with your new spouse. There are seemingly endless things to do here — seems like a really fun honeymoon spot.

A tiny one percent of those surveyed picked Croatia for their top honeymoon destination. But Croatia's beaches are among the most dazzling in the world, and the Eastern European country is fast becoming a top vacation choice, deemed a "unique honeymoon destination" by Bridal Guide.

Our neighbors to the north are most attractive to 0.9 percent of survey respondents, who are perhaps attracted to Montreal's lovely neighborhoods, like the cobblestoned, French-colonial Vieux-Montréal. Bonus: If you live in the Northeast, especially in the New York area, you can drive to this honeymoon heaven.