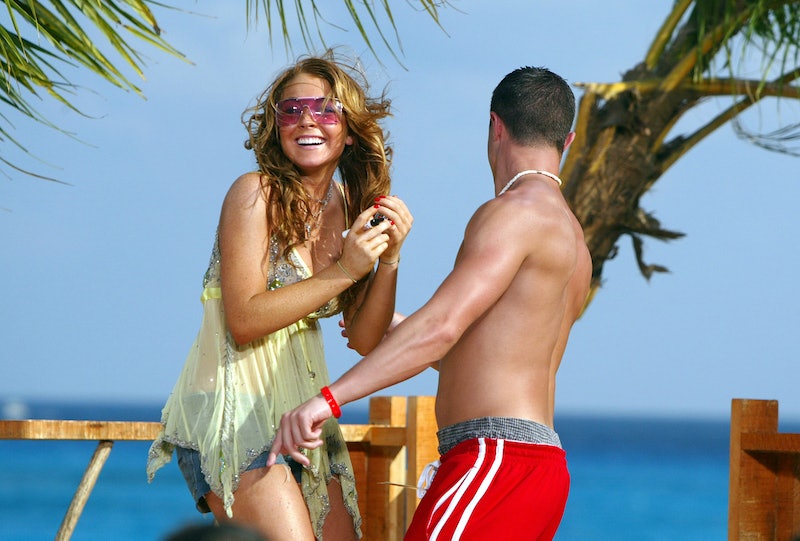 Spring break is nearly here! From movies like Spring Breakers to 22 Jump Street, spring break has gotten itself a little bit of a reputation for being a full week spent solely relaxing on beaches, or partying all day long with your best friends. But for anyone who experienced spring break in the '90s, you know that it used to be a much simpler time, where you most likely spent more hours on the couch watching other people party on MTV than actually hitting the beach yourself. Either that, or you were visiting your grandma with your family. Back then, your parents probably had a lot more pull over your travel plans.

The '90s were a much different time, so of course the ways we spent spring break back then were much different, too. While you might be planning a super sophisticated week-long adult vacation for yourself this year, the '90s were a whole other purpose. Hyper color T-shirt were cool, for instance. Whether you spent your well-deserved week off from school soaking up sunshine at the beach or hanging out with your friends watching '90s rom-coms, here are some ways you probably spent your spring break in the '90s.

1. In Daytona, San Diego, Or Cancun

The locations du jour for spring break in the '90s were largely dependent on where MTV was hosting their party. Where MTV went, the crowds of revelers would follow. In the early '90s, you still would have been making a beeline for Daytona Beach (also a favorite in the '80s!), but by the mid-'90s, more obscure locations like San Diego and Palm Springs in Cali, Panama City Beach in Florida, and South Padre Island in Texas were becoming more popular. By the late '90s, spring break went international, with Cancun garnering a reputation as a favorite with the spring break party crowd. Depending on when you were a spring breaker, those would have been your favorite party destinations in the '90s.

Meanwhile, if, in the '90s, you weren't old enough to actually go away for spring break, you were watching MTV Spring Break parties and concerts on TV, and longing for a day when you too would be old enough to party with Sisqo. Pink, Destiny's Child, Jessica Simpson, Busta Rhymes, and Blink 182 were just some of the performers you dreamed of some day hanging out with as you faced the supreme melancholy of watching college students have fun in tropical locations inside the box of your television.

3. Trying To Get On MTV Spring Break IRL

But spring break in the '90s wasn't all just parties and fun. There were, of course, also trips to grandma's house if you were still too young to hit up Daytona Beach. But hopefully, you were at least watching MTV while you were there.

Remember when networks would stream marathon TV shows? While we didn't yet have the ability to watch entire seasons of our favorite shows at will in one sitting, that didn't mean that on holidays we wouldn't watch back-to-back episodes of shows like Friends with abandon. Back in those days, without DVRs and streaming services, you'd have to stay up all night to see every episode too, so it really was a great activity for spring break and sleepovers with friends.

6. Cruising In A Jeep With The Top Down

If you want to talk about things that were cool to do in the '90s on spring break, you can't ignore Jeeps with the top down, and also packing too many people into them, all of them in swimwear. This was the kind of '90s Floridian imagery perpetuated by the media so much so that you were probably begging your parents to rent you a Jeep if you were under the age of 25. And if you couldn't get a Jeep, any old bright yellow drop top would do.

Any images you look back on from spring break style in the '90s, everyone is wearing high-cut bathing suits that look like they'd be more at home in an '80s aerobics class. You were probably doing this too.

8. Wishing You Were Jenny McCarthy

9. Watching She's All That

If you weren't of age to go to a destination spring break, you were hanging out at home watching She's All That instead. Of course, back then you probably didn't grasp exactly how problematic it is to make a movie about a woman who must entirely change her whole appearance in order to be desirable to a man, but still...