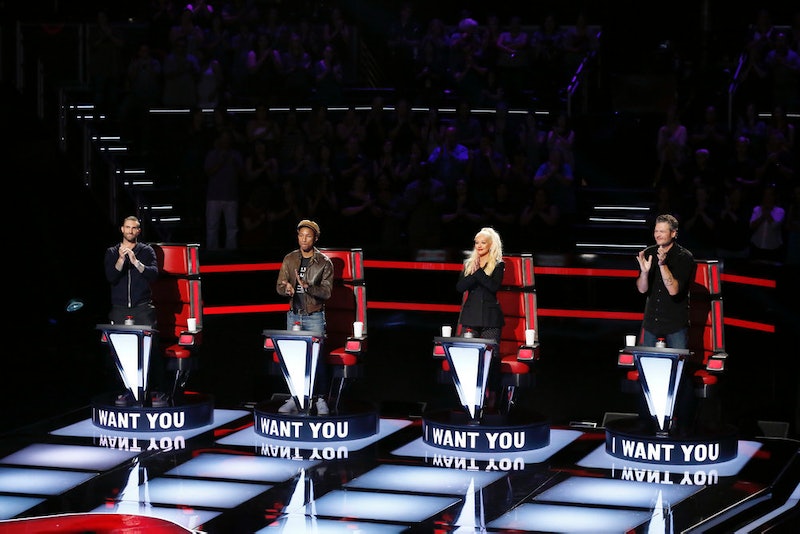 Ladies and gentleman, your Monday nights just got a lot more musical. The Voice is back in it's 10th season and is promising to be the best one yet. And if the first performance of the season is any indication, they'll definitely deliver on that promise. Paxton Ingram started the season on a high note with an emotional performance of Robyn's "Dancing On My Own." As long as every contestant is as good as him — or even better — season 10 is guaranteed to be the best one yet.

The Voice producers couldn't have chosen a better way to kick off the season. Ingram's personality captivated the audience from the minute his intro started rolling. His love for the arts was palpable and got me excited for his performance before he even stepped on stage. And he certainly didn't disappoint. The 23-year-old brought his strong vocals and even stronger stage presence to The Voice premiere, earning a three chair turn. Ingram pulled me into his performance as soon as he opened his mouth to start singing. His sound was strong and pure, and he was able to tell the story through both his voice and his face. The only disappointing part of his performance was that he didn't get all four chairs to turn. Oh well, I'll just chalk that up to Christina Aguilera settling in to her return on the show.

So which coach was lucky enough to get Ingram on his team? Ingram shocked them all by choosing Blake Shelton over Adam Levine and Pharrell, even after he admitted to wanting to join Team Pharrell. The R&B singer may seem like an odd addition to Shelton's traditionally country team, but it was his kind comments that ultimately won over the Miami native. Shelton told Ingram that he "recognized greatness" the minute he started singing — and really, how can you say no to that? While Shelton may not be the greatest match for Ingram, he can certainly teach him a new way of approaching his music. Whether they're a good match or not, one thing's for sure — Ingram is an extremely talented artist who deserves to be on The Voice for a long time.

More like this
If 'Entergalactic' Season 2 Happens, You Could Get A New Kid Cudi Album
By Kadin Burnett
Here's The Full List Of Zach's Confirmed & Potential 'Bachelor' Contestants
By Kadin Burnett and Grace Wehniainen
Netflix's 'Bling Empire' Season 3 Trailer Includes A 'Selling Sunset' Cameo
By Kadin Burnett and Sam Ramsden
Khloé Kardashian Debuts Baby Boy On 'The Kardashians' Season 2 Premiere
By Jake Viswanath
Get Even More From Bustle — Sign Up For The Newsletter