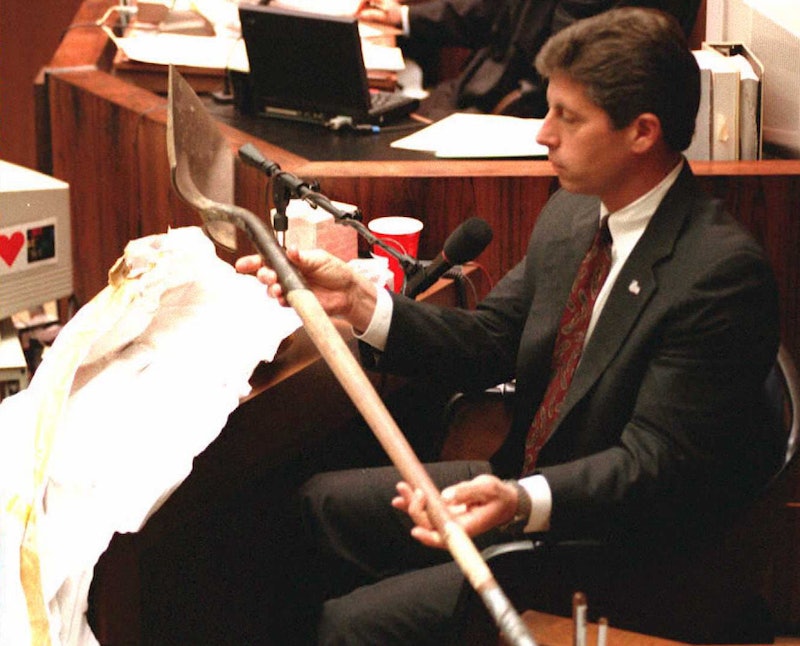 The O.J. Simpson case contained no shortage of shocking moments as it unfolded and many are depicted in Ryan Murphy's new series The People v. O.J. Simpson: American Crime Story. In the series, one aspect of the case that has taken front and center is the defense's allegation that LAPD detective Mark Fuhrman framed Simpson as a result of racism. Because Fuhrman discovered one of the most hotly-contested pieces of evidence (the now-infamous bloody glove), testimony pertaining to Fuhrman's alleged racism was admissible in court. American Crime Story also indicates that Fuhrman owned a Nazi medal as part of a collection of World War II memorabilia. Bustle reached out to HarperCollins, Fuhrman's book publisher, in an attempt to reach out for comment and has not yet heard back, but there have been some public claims that he owned Nazi paraphernalia.

According to the Los Angeles Times, Fuhrman invoked the fifth amendment when asked if he framed Simpson during the trial and denied that he is racist. However, he later plead no contest (which is not an admission of guilt) to perjury for testifying that he had never used racial slurs, as also reported by the LA Times, when a recording of him saying the n-word was discovered. However, Fuhrman maintains that his words were taken out of context, and in the book he published after the trial, Murder in Brentwood, wrote, "I apologize for the pain I caused with my insensitive words. However, one thing I will not apologize for is my policework on the Simpson case. I did a good job; I did nothing wrong."

Though the Simpson trial focused on Fuhrman's attitude towards the black community, American Crime Story hints at potential anti-Semitism in Tuesday's episode, and those claims have been brought to light before, but ultimately remain unproven.

In September 1995, The Los Angeles Times reported that deputy district attorney Lucienne Coleman had claimed that one of her detectives (who had previously worked with Fuhrman in the 1980s) complained to her "that Fuhrman walked around on weekends wearing Nazi paraphernalia." The same declaration also alleged that after a fellow homicide detective, Andy Purdy, married a Jewish woman, Fuhrman painted swastikas on his locker.

The same article reported that in August 1994, Coleman met with Marcia Clark to inform her of the Nazi paraphernalia and vandalism allegations. According to Coleman, Clark dismissed the claim as "bullsh*t being put out by the defense" and didn't look into it. When Coleman had further contact with Purdy, he allegedly told her that he would deny any claims of Fuhrman's anti-semitism. A prosecution insider defended Clark's response to Coleman by noting that, at the time the claims were brought to Clark's attention, "The information Lucienne provided was multiple hearsay, really just gossip ... It was an isolated rumor and nothing more was heard of it for a long time."

Although the Nazi memorabilia claims didn't surface at trial, Simpson's defense attorneys attempted to gain access to them. According to CNN, on March 8, 1995, Judge Ito denied the defense's request to "see papers linked to allegations Fuhrman had Nazi paraphernalia at his desk." In a 1996 interview with San Francisco Gate, Johnnie Cochran stated that Fuhrman was a "collector" of Nazi memorabilia, but he didn't elaborate on how he knew this or whether he'd seen concrete evidence.

In the context of American Crime Story, the Nazi medal is definitely a relevant point to mention because it's clear that allegations of Fuhrman's anti-Semitism swirled both before and after the trial — but evidence of it was never made public.