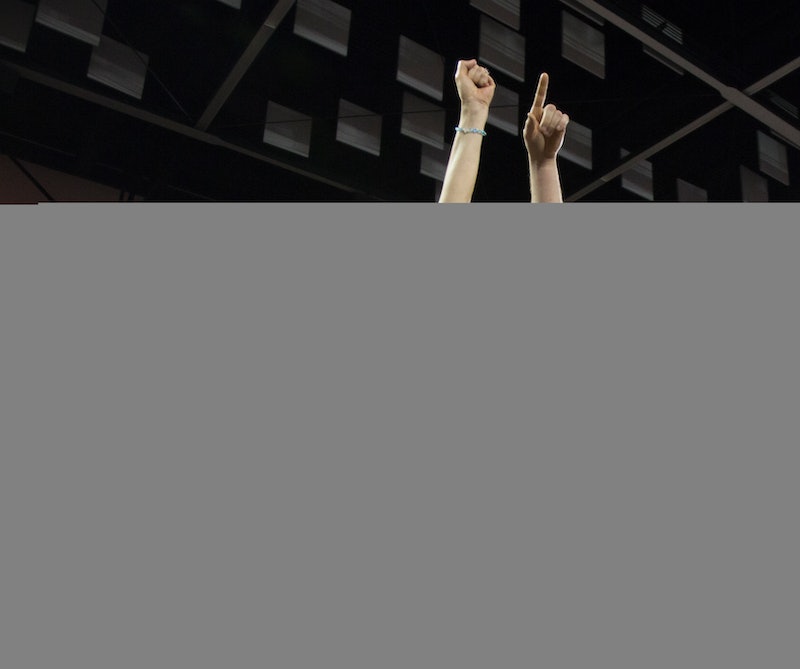 After more than six months of campaigning, we've learned to expect Donald Trump to make bold outbursts, discriminatory statements, and crude jokes. In a sense, we've all become desensitized to it, as we roll our eyes and, naturally, expect the worst from his mouth. Unfortunately the political situation has reached a point where Donald Trump's decent statements — especially concerning feminism — are more unpredictable than his derogatory ones. Based on this, as well as a hefty handful of past statements that weren't considerate of women, Trump arguably falls into the realm of "accidental" feminist. His occasional support of Planned Parenthood doesn't go unappreciated, but we're still not convinced.

Long before announcing his candidacy, the billionaire real-estate mogul has made some comments that suggest he still has some learning to do when it comes to respecting women. For example, in his book Trump 101: The Way to Success, Trump ensures his readers that a woman's beauty isn't superficial, but goes on to compare it to that of a building.

Beauty and elegance, whether in a woman, a building, or a work of art is not just superficial or something pretty to see

For that matter, he believes women's rise in the ranks is an ode to their sexual appeal, not to the fact they have an exceptional brain. For Trump, this especially goes for journalists.

I mean, we could say politically correct that look doesn't matter, but the look obviously matters. Like you wouldn't have your job if you weren't beautiful.

On the flip side, author and Daily Caller contributor Charlotte Laws would go as far to call Trump the most feminist contender in the presidential race because he doesn't handle women with "kid gloves." Instead, she maintains, he judges an individual based on whether or not they can get the job done — not based on their gender. Attorney Michael Cohen told CNN that, based on his research, Trump does not pay women less than he pays men. That's a start.

Trump is not a gender-based payer. He is a performance-based payer, meaning if you do the job, he doesn’t care if your name is Mary or if it is Joe.

Though I wouldn't go as far as to call Trump a feminist, Laws makes a great point when she claims that his competitors — Hillary Clinton, in particular — aren't much better when it comes to shoving sexism out of the political sphere. For example, Clinton didn't say a word after Madeleine Albright played the gender card and "joked" that women who vote for men are going to hell. Would she have said the same thing to men? Not likely.

If men and women are going to be equal in society, gender has to become a non-issue. In that sense, Trump really doesn't care whether his staff member is a man or woman as long as they do what has to be done. It's definitely not the ideal definition of an activist, but in the social conservative GOP sphere, it's something. Here are five times Trump actually exercised some convoluted version of feminism.

In his book Trump: Surviving at the Top, he gave a vague explanation of his stance on feminism. His hesitancy to make up his mind is reminiscent of his flip-flopping on the topic of KKK leader David Duke's support. He positions himself as neutral ... but not.

I’m not a crusader for feminism, and I’m not against it, either. I’m just oblivious to a person’s gender when it comes to hiring people and handing out assignments.

In his book Trump: The Art of the Deal, the billionaire concedes that women can be more than just housewives. Good job. His realization would be a little more pleasing if he wasn't so surprised.

It’s funny. My own mother was a housewife all her life. And yet it’s turned out that I’ve hired a lot of women for top jobs, and they’ve been among my best people. Often, in fact, they are far more effective than the men around them.

Trump's statement in Trump: The Art of the Comeback is verging on empowering, but again, is reiterating a truth that should have been obvious from the beginning.

I grew up in a very normal family. I was always of the opinion that aggression, sex drive, and everything that goes along with it was on the man’s part of the table, not the woman’s. As I grew older and witnessed life firsthand from a front-row seat at the great clubs, social events, and parties of the world — I have seen just about everything — I began to realize that women are far stronger than men. Their sex drive makes us look like babies. Some women try to portray themselves as being of the weaker sex, but don’t believe it for a minute.

Although he's simultaneously attempting to shirk accountability for his "naive" views, this may actually be the most insightful remark thus far. In Trump: Surviving at the Top, he becomes aware of one of the reasons why false, discriminatory perceptions of women's role in society have become so engrained and normalized. He came to this realization after meeting his now ex-wife Ivana.

Everyone knew what I meant, and I think everyone sensed that I found the combination of beauty and brains almost unbelievable. I suppose I was a little naive, and perhaps, like a lot of men, I had been taught by Hollywood that one woman couldn’t have both.

During two separate GOP debates, Trump supported Planned Parenthood's non-abortion services — a move that's basically unheard of for any GOP candidate in the race this year. On Feb 26, during the debate and in response to Marco Rubio and Ted Cruz's attacks, Trump admitted that the organization helps millions of women, but characteristically refused to take a strong side. For example, though he believes Planned Parenthood helps millions, he still wants to defund it.