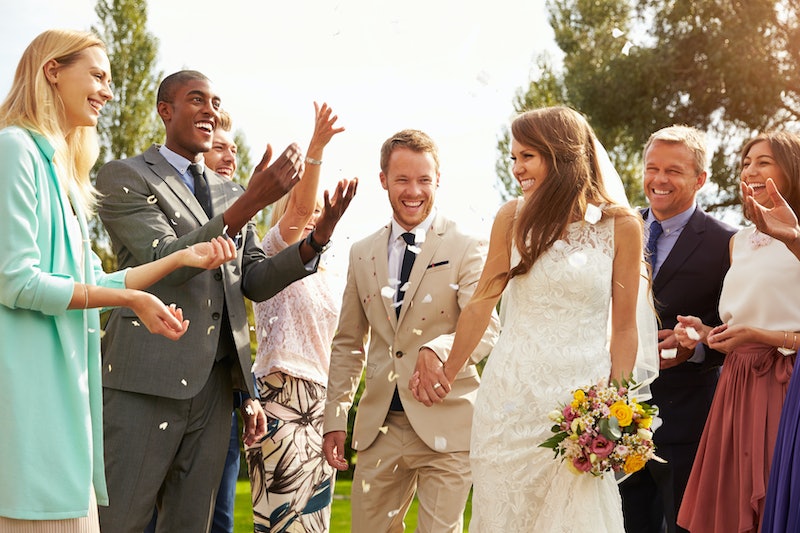 According to the 2015 Newlywed Survey released this week by WeddingWire, the average number of wedding guests is 120 people. Although that seems like a reasonable amount, especially compared to celebrity guest lists that can run into the thousands, once you toss in how much dinner costs per person, with that average being $250, 120 people seems like a lot. Of course, if you’re Prince William and Kate Middleton, 1,900 guests aren’t exactly breaking the bank — also, who knows that many people?! And I think we can all agree, even those who haven't been married yet, that wedding planning is beyond stressful enough as it is with just a few dozen guests.

The survey interviewed 6,000 couples married in 2015 regarding wedding planning, expenses (the average wedding cost is now roughly $30,000, so start saving your pennies), challenges, and of course guests. While the magic number for guests is 120, the question needs to be asked: Is that a perfect number of guests to have? Does one guest number actually mean something, in regards to future marital bliss? While studies vary, as studies tend to do, here are three findings that might make you reconsider just how many (or how few) guests you invite to your big day.

According to a 2014 study by economic professors at Emory University, if you can manage to invite everyone you know and have it as big as possible, but also as cheap as possible, it just might be the key to a successful marriage. The theory is that the less money that’s spent is money that can go toward the future, making it financially easier to get your life started.

Although a big wedding and a cheap wedding don’t seem to make sense in the same sentence, I guess if you go the route of DIY, you can pull it off. But eliminating that contradiction from the equation, weddings that cost $20,000 or more are 1.6 times more likely to get divorced than weddings that cost $5,000 to $10,000. Those who spent on $1,000 or less on the big day (if that’s even possible), actually have a lower than average divorce rate, according to the study. Backyard BBQ with everyone you know, anybody?

2. More Guests Can Strengthen A Marriage

Another study, Before I Do, found that more wedding guests were also a plus, but for another reason. Without considering the cost of the wedding, this particular study referenced findings from the 1970s that more witnesses, as in guests, made people more likely to take their marriage seriously, because of the public declaration to so many individuals that the married couple may not want to disappoint.

Of course these referenced studies in Before I Do are some 40 years old or so, but the researchers seem to believe it still holds true.

3. Actually You Should Probably Invite At Least 150 Guests

While 120 seems to be the magic number, or at the least the average number of wedding guests, a 2014 study by psychology researchers at the University of Denver found that you want to invite at least 150 guests.

The study examined 418 people who were single at the beginning of the study and married five years later. It found that 47 percent of those people who had gotten married in front of at least 150 guests had “high-quality marriages.” While those with 50 or less guests had lower marriage quality, with only 31 percent being content in their marriage. For people who got married with a guest number in the middle, 37 percent of them reported high-quality marriages. Basically, shoot for 150 or higher if you want to try to avoid a divorce, or marital misery.

Takeaway? More guests is better, as long as you keep the expenses low. But hey, who doesn’t love a taco truck at a wedding?!